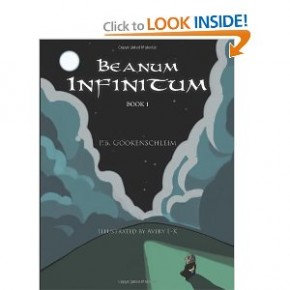 The premise of “Beanum Infinitum” is a unique and fascinating idea – to explain the basic concepts of existentialism, with references to advanced physics and astronomy and a sprinkling of absurdist humor throughout – and all in the format of a whimsical childrens book. While some aspects of the total creation are flawed, those who take the time to read this unique piece of literature may find it to be “A Legume in the Rough”.

A couple of things the reader will want to know before purchasing and/or reading this book on Amazon. First, while this story is in a 44-page childrens book format, it is not a book for young children. Or at least, not for children whose parents would mind reading the f-word occasionally interjected at somewhat random moments. Also, while the book is available as a self-published finished work via AuthorHouse, the author describes it as “more of a promotional issue”, which explains the intermixed pencil drawings and hand-written side notes alongside the cleaner-formatted text and color illustrations.  I would love to see this book re-imagined with a professional illustrator, for while the penciled-in doodles seemed to serve as more of a distraction than a descriptor of the story, you could also easily see what the author was portraying.

That being said, the premise itself was unique and engaging. A story within a story, an ancient storyteller spins the tale of Beanitrio, a tiny sentient pinto bean living on the planet Refry (in the Charro Way Galaxy – sensing a theme yet?), who is coming to terms with his own self-awareness and the world around him. His journey of discovery grew, as he discovered more each day about the world, the galaxy, the universe around him. His emotions ran wild with each new revelation, from joy and excitement to loneliness and desperation. Then, as the mysteries of “How” unfolded, the ever-looming question of “Why?” was revisited time and time again as he struggled to find his purpose and place in his strange and wondrous surroundings.

On a personal level, it almost felt as if there were two people writing the book – like the majority was painstakingly penned by a learned, highly intelligent and introspective philosopher, but with a nine year old child with a head full of poo and fart jokes (the kind that said child is convinced will NEVER get old) looking over their shoulder and interjecting his/her two cents every so often.  Sometimes this combination serves to add a little levity to an otherwise deep and intense existential dilemma – but more often it’s an unwanted (by this reader, at least) detraction from the flow of the prose and substance that kept it truly interesting.

All in all, “Beanum Infinitum: Book 1” is definitely worth a look for those wanting to dip their toes into the realm of existential philosophy without any of the stuffiness or forced intellectualism that sometimes runs hand in hand with it.  It’s definitely among the more ‘especial’ tales out there, and leaves the reader wondering what situations could possibly be in store next when Book 2 hits the shelves.

Many a bumper-sticker, t-shirt and poster have been emblazoned with the above statement, and many  poets, pundits and politicians have used the expression to embody their ideal of the way the world should be, in some way or another – but in reading Dee Allen’s “Unwritten Law”, I see something more than just a glib reference to that aforementioned outrage.  I see its very embodiment, sincere and unflinching, in this collection of extremely provocative and well-written poems.

The introduction by the writer describes the first-hand corruption and racism Mr. Allen experienced from early childhood through adulthood, in Atlanta and San Francisco, and doesn’t shy away from making his opinions on law enforcement clear, even before the title poem, “Unwritten Law” makes that abundantly clear, with such openly aggressive lines as “The only good cop that lives is/a bad cop who keeps his mouth shut.”  Though my initial reaction to this particular piece was one of anger and discomfort (as I have known several police officers personally), I also tried to keep an open mind, realizing that this level of anger and distrust was a result of a life experience much different than my own, and that such heated bursts of emotion may be exactly the call to attention the writer is trying to create.  Such words don’t just entice, but outright demand the eyes and ears of those who would rather look away from the darker deeds of those in power than face the dirtier, uglier side of life that the disenfranchised and marginalized members of our society have no choice but to face head-on, on a daily level.   He writes of wrongs in not just our own still-evolving society, but in other parts of the world as well – from North Africa to Wisconsin, Egypt to a Georgia prison cell, never shying away from calling out the unjust treatment of others, nor the indifference of those with the power to rise to their aid.

Then, somewhere in the midst of all this anger and outrage, there is a gratitude and love of life peeking through, like momentary pauses of sunlight in a dark and turbulent storm.  In “Downpour”, he laments the suffering of the urban homeless in the storm, yet remembers to feel the appreciation of a dry blanket and a hot tea in his hands.  In his poem “Rustwalker”, you see how the power of art can bring forth a sense of admiration and awe, though it’s left to the reader to decide whether such admiration was for the statue itself, or the city surrounding her.   In “Game” he dares those suffering injustice to take an active part in fighting against oppression, and recognizes the latent power of the individual against seemingly insurmountable odds.  While the aggression in some of his poems can be disquieting to say the least, the undeniable assertion that EVERY person deserves to have their basic needs met and their human dignity intact should (hopefully) be something that everyone can agree with.

These thought-provoking portrayals of corruption, struggle, rebellion, perseverance, and yes, even the scattered glints of hope, are presented in a simply-bound publication by POOR Press, a non-profit arts organization that provides media access to low and no-income adults in the Bay Area.  For more information on this collection, Dee Allen, or Poor Press in general, you can visit them on the web at www.poormagazine.org. Allen’s previous book, “Boneyard” can also be purchased there.

Sometimes reflection upon ones past is the best possible way to get a glimpse into ones future.  Mr. Livernois’ detailed and refreshingly candid account of a reunion with his 80 year old estranged father, The Road to Guanajuato, is a prime example of such.

Joe Livernois was the eldest child in a large Catholic family, with a severely bipolar father and a hardworking (and often self-sacrificing) mother.  They grew up fast in a flurry of fear, disappointment, uncertainty, and all the usual chaos that comes with living with a mentally unbalanced parent.  After a particularly mortifying encounter with his father in his adult life, they parted ways and remained estranged for nearly 23 years…until a series of events caused them to reconnect online, eventually leading to an apprehensive gathering of the Livernois siblings and thier father, to celebrate his 80th birthday – in the small, traditional village of Loma, Mexico.

Yes, he’s in Loma.  Not Guanajuato, the town his father had originally attempted to journey to, but the quirky, unexpected place he wound up.  Much like the writers own life and the lives of his siblings, this story isn’t about reaching the destination they were working towards, but the unexpected and often eye-opening experiences that can happen to make that previously sought destination seem well-nigh irrelevant by comparison.

The events of the trip, many of which involved attempts at entertainment interrupted by the uncontrolled outbursts of his infirm father, were not so much the driving force of the memoir as the emotions and insight gained during those times. The heart of the story was found amid the simplest of conversations, as well as the searching reflections on the authors own fears and insecurities as a parent & husband, his religious upbringing, and his perceptions of the people around him.  While not without bias in some respects (i.e. his views on Catholicism and his initial apprehension towards certain aspects of Mexican culture) it’s overall as honest and searching as an account this personal can be.

About the reviewer: Sarah Melton is a published author. You can find a number of her short stories in the Flash Fiction collections at www.absolute-x-press.com.
END_OF_DOCUMENT_TOKEN_TO_BE_REPLACED