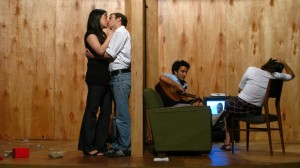 HOW COMPLETELY WRONG YOU CAN BE

Argentine theatrical director and writer Mariano Pensotti’s ambitious performance piece evanesced in three performances in the middle of February in San Francisco, in the middle of a lengthy international tour his company is doing, and leaving behind it a long trail of disintegrating engrams like cold, vanishing sparks: the sense of a futile but unavoidable search into the meaning of the past for the present, and of the present for the future, even if all we can ever hope to keep of our present moments is a deck of damaged photographs called memories from which we devise an elaborate fiction we call our life.

The piece (it doesn’t feel quite right to call it a play) is performed on a revolving stage, made of undressed pine and divided into four pie-shaped sets; partly via dialog, partly by way of an endless, recitative-like voice-over, in Spanish, with English supertitles, by four actors playing young Argentines living out the dilemmas of growing up between the years 1999 and 2009; that is, between Argentine’s economic collapse and an uncannily similar one that hit the West at large ten years later.

As Pensotti recounts in the program notes, he got the idea for the piece from a collision of events and questions: a series of damaged photos, many of nameless Argentines, that he started collecting from a photo lab that used to stand near his home (and has since closed due to the digitalization of photography) and a series of questions about the growth of hopeful, dream-filled youth as it moves into its first years of disillusioning maturity, and another series of questions about how we build our identities on a complicated foundation made up of the illusions of aspiration, the fragments of failed dreams, and the compromises we make with an often recalcitrant and incomprehensible reality.

If this makes the play seem to court the problems of excessive ambition, it should. The play itself – performed by an extraordinarily able and energetic quartet of actors (Pilar Gamboa, Javier Lorenzo, Santiago Gobernori and Maria Ines Sancerni) who, in the two-hour performance, create dozens of characters spawning subplots and counterplots in more than 80 scenes – just manages to maintain enough coherence to keep me, as a spectator, committed, at the occasional price of psychological plausibility, and thus momentary losses of sympathy with the characters’ dilemmas. Which is a small shame, as those dilemmas are often ludicrous and tragic and all-too real: a young filmmaker and his girlfriend, love-drunk on each other, entangle and disentangle their romance between painful sorties into the disappointments of the harsher reality outside their impassioned dyad; a young woman discovers that her father has a second family, and sets out to spy on him and pull him back into her own emotional orbit by means as devious as his own have been toward her; an aspiring young business man receives a box containing a severed hand that turns his next ten years into a recurring nightmare of almost farcical paranoia that he is never able to resolve, explain or become resigned to: a MacGuffin representing the ultimately grotesque enigma of human life.

At the end of the play, as the stories of the four Argentines are left in an uneasy state of irresolution, the last, or perhaps the first, element that fed Pensotti’s restive imagination peals out, as the empty stage revolves beneath the fading light, through the sound system that throughout has been regaling us with a mixture of pop tunes, “house” and what one of the characters himself complains is too much folk music: the alt-band “of Montreal,” with the dark, knowing, disillusioned voice of Kevin Barnes singing,

“The past is a grotesque animal, and in its eyes you see …”

Christopher Bernard is the co-editor of Caveat Lector magazine and author of A Spy in the Ruins.