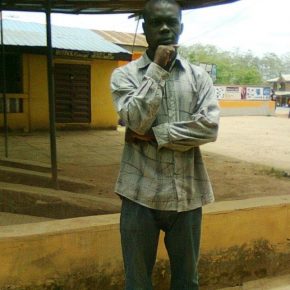 Humanity thinks it is moving

Humanity thinks it is advancing

Humanity thinks it is in control

Humanity thinks it is in comfort

Humanity thinks it is living

Humanity thinks it is all-knowing

Humanity thinks it is at peace with self

Humanity seems to be lagging behind time

Humanity is rather subjugated

Humanity is in discomfort

Humanity is nearly second to dead

Humanity seems to know nothing

Humanity is at logger-heads with self.

Humanity seeks for the way-outs

It thinks they will pave the way

‘’It will help foster relationship’’, it thinks

Humanity believes it will solve the problem of exchange

It does…but something is lacking!

Humanity’s love for money became a necessary evil on earth

So, rather than humanity move forward,

its circle movement of emptiness lingers

‘’The mind will learn to be better’’ it thinks

Humanity believes it will solve the problem of ignorance

Humanity is left with what it has

after what it has learnt had been forgotten

Humanity sought to seek for information

Humanity believes it will get rid of deformation

Humanity’s priority becomes a sieving off of relevance for irrelevance

Ignorance is what humanity is left to embrace

Its circle movement of deformation is what it is.

‘’It can only function in good health’’ it thinks

its circle  movement of sickness continues.

‘’This will keep it in check’’ it thinks

Humanity believes it will abide under this

its circle movement of In-Just-Ice is what is seen.

Humanity’s thorough stare at self blurs what it first ‘sees’

So, rather moving forward,

Its circle movement of captivity is what is going on.

‘’It would foster the togetherness’’ it thinks

Humanity believes this would move it forward

So, rather than moving forward

its circle movement of tampered Spirit of Reality is the case

Humanity sources for The Truth

‘’it would create a sense of responsibility’’ it thinks

Humanity believes this would face-lift its existence

Humanity’s focus on the material plane defeats the idea

its circle movement of falsehood is what it settles for

Humanity thinks it is moving

Humanity is really advancing in circles

Humanity is really in the circles of control

Humanity is really in the transient circle of comfort

Humanity is really living in circles

Humanity is all-knowing in the circle of temporality

Humanity is at peace with self in the circle of blurriness.

In short, humanity is moving in circles!

Mirror against the Wall

Here they are again

Through their rise and fall,

they claim to be our only friend

They told us that they can

but we understand who they are

so, why are they talking to us again?

They reflect their image against us

Through their thoughts and actions,

we see their intents

They tell us they care

but their workings say otherwise

Then, why come to us?

They bring to us their incidences

we sense their agendas

They want us to believe in them

but we know this is a Fool’s Paradise

Yet, why would they attempt to convince us?

The angle of incidence is a plane reflection of their image

Through their ‘plane’ nature,

they assured us they have our backs

but we understand what they stand for

and what their capabilities really are

Still, what gave them the guts to say otherwise?

I was angry with everyone

because I thought they offended me

This happened a long time ago

and I never knew this had gotten to me

I decided to take a picture of me

to know why I thought they vexed me…

What I saw was nothing

But “The Broken Mirror”

They were unhappy on the inside

because situations had taken them for a ride

So, as they were figuring out a hide,

They sought to take a look at the corridor…

All they saw was…

Mr. Ben, as he is fondly called, is an internationally and a represented author, poet, playwright, novelist, essayist, speaker and voice-over artiste, whose  love for humanity has inspired him to thirst for knowledge towards its advancement. Based in Lagos, Nigeria, Mr Ben delights in reading, writing, communicating and meeting people. His published works can be seen at www.amazon.com/author/mrben

Following the words of the great Greek philosopher, Socrates, ‘Employ your time by improving with other men’s writings so that you can gain easily what others labored hard for’, Mr. Ben, as he is fondly called, is poised to impact humanity in all spheres of life and human recognition. With his knowledge zenith, he is willing to disseminate valued and ageless information to all interested persons, groups and organizations-what he toiled to gain over the years.

To depict this feat, he has written over twenty breath-taking masterpieces that cut across almost very literary category to help improve the cause, shape and existence of humanity; sexuality, business anecdotes, science, home affairs, marriage, relationships, friendship, self-help, gender issues, life matters, motivational and inspirational interests, educational/academic matters and many more…He is still counting! To his credit, he has written over forty timeless articles on the various literary categories; showcased on www.ezinearticles.com, www.articlebase.com, www.searchwarp.com, www.triond.com and other affiliate sites.

His amazing writing skills, novel concepts, creative works and avid reading and communication skills have earned him a recognized membership with the following international affiliations; www.christianwriters.com, www.associationofaspiringauthors.com, www.writerface.com and other known writers’ organizations. No doubt, he is not only a writer with a difference but also an entrepreneur, investor and a philanthropist whose slogan reads ‘service to God and humanity are paramount’.