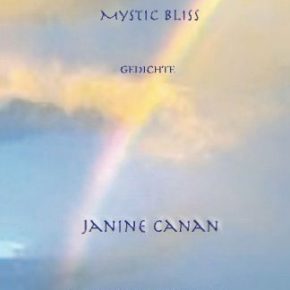 On her newest poetry collection “Mystic Bliss”, Janine Canan continues to shine through her dedication to Earth –and my humble self, on my signed copy only- her reflections on life, the self, the damage done to women and how they can rise above.

The collection is bilingually translated to German, which mirrors Canan’s devotion to a pan-cultural presence, and a more solid sense of self through her universal meditation on women, God and humanity.

In her sharp, abrupt use of imagery, Canan’s language seems heavily influenced by the Dickinsonian style. Canan is not generous with her words. She uses the shortest form of the written verse to express the meaning she tries to convey. Her meanings, profound as they are, carry the syntax which she masterfully desires. The abundance of layers makes up for the more intentional themes viewed as unfavorable forwardness in some poems such as “Prayer” and Streams”.

Canan’s poems vary from simple, mundane expressions of monotone feelings “Sorrow”, “Stages of Woman”, “Mirror” to the more mysterious ones, laden with complex meanings and oozing with thousand methods for deciphering the subtext. Among those that shine is “Consciousness” in which she ends the poem with a bang;

There’s also the emotionally-charged “Headless” which is a testament to the violence women face on a daily basis, or “Idiot’s guide to survival” which mourns the destruction of Earth by the hands of men.

Despite the eerie feelings Canan’s poetry could evoke in you, she always ends on a high note. Like a prophetess her message was not to be a warner, but a herald of glad tidings onto people who will listen to her. So listen closely to what she has to say, for her words would definitely be

inscribed on your soul