More of this article behind the link below.

Link to contact and signup information for the Climate Change Action Groups and the Ecology Center: http://community.livejournal.com/chaos_zine/6334.html

END_OF_DOCUMENT_TOKEN_TO_BE_REPLACED 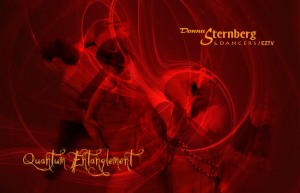 DONNA STERNBERG & DANCERS in collaboration with EZTV premiere a dance/multimedia event where dance, video and science collide, intertwine and coalesce. Quantum Entanglement  explores how we are connected in both human and scientific ways, from the emotional interaction between people to the movement of subatomic particles. The performers including dancers, a musician and actor weave in and out of plexiglass cubes, passageways and a small lounge, interacting with projections on two video screens.  In the unorthodox space of Royal T, a charming cafe/shop/art gallery, audience members move from place to place as the performing area shifts.   Live music as well as selections ranging from the classical composer Albonini to Tinariwen, a band of exiled Touareg freedom fighters from Mali to the Gotan Project aurally entwine with the movement to create a sensory feast.

Editor’s Note – apologies to those out of the area for posting something local to Southern California…but this seemed a very unique, interesting, interdisciplinary approach to dance. We encourage people to use this forum to comment and dialogue with the producers and dancers. And, of course, if you are near Culver City, please feel free to attend and send in a review of the performance to Synchronized Chaos’ upcoming issue!

Santa Clara Review is published in February and May by Santa Clara University in Santa Clara, California. We accept submissions of poetry, fiction, nonfiction, essays, drama/screenplays, art work, and photography year round.

Deadline for all submissions is Oct 30th – www.santaclarareview.com

I Fear You Not

You have no effect on me!

You cannot touch me!

Your efforts serve only to strengthen me.

I fear you not

For I rejoice in my

The disguised temptations you present me

Are inevitably revealed and disrobed

By the grace of my loving God.

Although I am weak – I am strong!

Although I stumble – I right myself.

Although I fall – I rise above you!

Although you bring me darkness,

And I fear you not

For I rejoice in my

Although you entice me with luxuries

I pray for forgiveness and wisdom.

Although I am woman (man)

Christ lives in me!

I belong to my Lord!

In the house of my Lord

And I will enfold

As many as I can under my wings!

For I fear you not

As I rejoice in my

Bless us all my Lord who rejoice in your love

Bless us all my Lord who seek your truth

Bless us all my Lord who seek your strength

Bless us all my Lord who fall at your feet

In your name we pray

Blanca Jones lives in the San Francisco Bay Area, welcomes feedback on her writing, and may be reached at blancajones@att.net

Each of Puccini’s one-acts follows a basic, coherent plotline, but with enough background action and distinctive supporting characters to add color to the pieces and remain engaging after audiences guess the ending. Il Tabarro’s Frugola, another discontented boatman’s wife who avoids adultery, deposits her frustrations and other odds and ends into a memorable purseful of junk. The food scraps she saves for her beloved cat, the stories behind each object she collects, and her dream of a country cottage remained with me longer than Giorgetta’s forbidden affair. And the working stevedores’ rough clothing and the half-lighting and simple sets befitting a wooden barge highlights the contrast between both wives’ dreams and the reality of their lives.

Suora Angelica’s convent, updated into a children’s hospital, sings with joyful Ave Marias and the chatter of cheerful sisters. We see the ladies playing with wheelchair-bound children, breaking small regulations, sharing innocent desires, and remarking upon water from a fountain turned golden with afternoon sunlight. They make the best of a clinical environment, perfectly staged with glaring indoor lighting, cold straight-backed chairs, and medicines in full view of patients and caregivers.

Such a life-affirming sensibility further adds to the tragedy of Angelica’s suicide and the emotional impact of her miracle vision. The vision, a child waiting to welcome her to heaven, might have seemed contrived in the hands of a less competent opera company. Yet the hospital, with its old-style frosted-glass door, provides the perfect way for the boy to appear ethereal yet believable.

Gianni Schicchi’s supporting characters include a corpse hidden in plain sight, a host of feuding, greedy relatives, notaries, doctors, and two guileless young lovers. Revered soprano Racette herself plays Schicchi’s daughter, one of the pair of lovers – demonstrating San Francisco Opera’s awareness of the importance of quality vocals for the entire cast and not merely relying on the strength of a scene’s main characters. Audience members chuckle at her famous “O mio babbino caro” – as Racette comes across as having a youthful crush on Rinuccio, which fits in with the piece’s charm. Schicchi and the various relatives’ over-the-top facial expressions and lyrical shows of emotion remind us this is a comedy, and the final pillow-fight in the black and white art-deco stage bedroom conveys a refined-sitcom sensibility.

For all three pieces, the orchestral music complements the action without overpowering the vocals or plot. Dramatic at tense moments and atmospheric when needed to set the pace and mood for action between arias, it provides the continuity Puccini intended when he designed these three acts to be presented together. Although the plots bear no relation to one another, a background motif of celebrating common, quirky, crazy humanity and life’s daily moments runs through the entire performance – helped along by the entire cast, crew, and orchestra of San Francisco’s Il Trittico.

For Brian…
His seat in the orchestra was empty that day…
I remember my friend and how he loved to play.
His passion for music knew no bounds.
His french horn made amazing sounds.
I grieve for my friend for I know so clear..
To give up one’s music can bring tears…
The agony of knowing he can no longer play,
Encourages my playing as I think of the day
When sorrows of life will give way to joy,
And sadness will no longer reign in that boy.
Lord give us a vision and music in our souls…
May we play and sing with You as our goal.
Your passion for music remains the same…
We sing to you with no thought of fame.
Keep us useful with each passing day…
Humble in Your sight as we sing and play.
Patsy Ledbetter plays classical music in a large California orchestra, along with writing poetry and raising a family. She welcomes comments on her work and may be reached at patsyled@sbcglobal.net 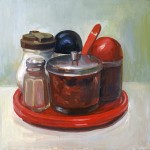 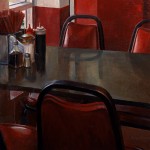 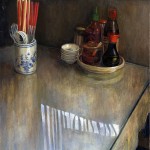 Scene from a Noodle House 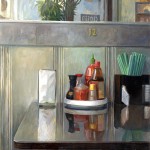 The fundamental nature of my aesthetic rests in the use of simple, quiet compositions that visually communicate emotion within the precepts of narrative realism: renderings of ordinary objects, subtle glimpses of everyday life. These images are collectively reflected on stillness, solitude, and mystery- yet with an element of comfort and familiarity.

In my effort to combine traditional and contemporary design practices, I strive to create works of art that retain a timeless quality while incorporating contemporary subject matter. In doing so, it is my resolve to provide viewers with visual explanations of emotion that will hopefully make for a lasting impression.

Wayne Jiang may be reached at riverwave@sbcglobal.net and welcomes comments on his work and inquiries from interested buyers and galleries.