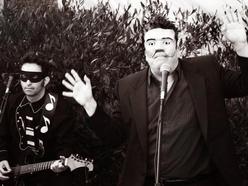 The Kingdom of Not

THE GOOD, THE MAD AND THE MARVELOUS

In what must be the most varied, if not richest, theatrical feast this year in the Bay

presented 46 shows from some of the most adventurous, small, hungry and fearless theatrical

companies from geographies local, material, and crazily virtual, when not virtually crazy.

Cometh,” “Cheesecake and Demerol,” “Crazytown: My First Psychopath,” “The Revolution

Will Not Be Circumcised,” “You Killed Hamlet, or Guilty Creatures Sitting at a Play,” or “The

Wounded Stag and Other Cloven Tales of Enchantment”?

Alas, out of nearly four dozen shows, I could catch only a handful over the festival’s two

engage, in part or in whole, at once or alternating, in one degree or another, like a slap in the

face, a caress at a party or a cocktail of gin, gasoline and ecstasy, as unexpected as a hand

more. And what better can one sincerely ask for?

“Legacy of the Tiger Mother” is a sturdy, highly polished musical by Angela Chan and

Michael Manly (Chan did the music, Chan and Manly the book and lyrics) about the demands

an immigrant Chinese mother makes on her daughter to win a piano competition, the resulting

resentments and incomprehension between the two women, and the eventual, somewhat too tidy

results – including the curious case of repetition syndrome, when the daughter grows up to inflict

on her own daughter.

more discipline and less iPhone, iPod, iPad – less “I,” period), this is both a cautionary tale and

an object lesson: discipline yes, but it needs to have a clear reason and a desirable aim, otherwise

it merely prepares for a rebellion that will be as gratuitous, irrational and destructive as the

insensate, compulsive whip. Though the musical ends before telling us what the granddaughter

will grow up to be, I suspect she’ll belong to the generation to finally throw off the piano scales,

the legacy and the past, and learn the some of the darker lessons of freedom. And why discipline

The story, clichéd as it is, is sometimes cloying, a pitfall in any portrayal of mother-

daughter conflicts and reconciliations – and one wonders what happened to the fathers, uncles,

sons, brothers – the male of the species, who is too conveniently dispatched for plausibility.

The musical is nevertheless saved by a clever book, witty lyrics and charming music, to say

nothing of the performances. Satomi Hoffman and Lynn Craig create the sense of a far larger

cast, a thronging and fascinating presence. Composer/author Angela Chan was the wonderful

“Weird Romance,” which I caught on the same afternoon, presented two interesting one-

acts written by Nick and Lisa Gentile. The first, “Russian Roulette for Lovers,” tells the tale of a

series of bets made by a couple who are about to be married, that lead, through a contrived plot,

to a degree that mere love couldn’t hope to match. The cleverness of the writing can’t quite

hide the implausibility of the story, but it was gamely performed by Cassie Powell and William

The second one-act was “Metamorphosize, Mon Amour,” an absurd if not quite

will in a Darwinian universe. This is another game attempt at being clever and intellectual that

does not quite come off, partly because the philosophy is sometimes annoyingly wrong: the

between it and Darwinian’s theory of natural selection, and Nietzsche was at pains to say so; and

yes, he did have an explicit description of what constitutes the Übermensch, though Chuck, the

sophomoric half-literate maggot, claims he did not: according to Nietzsche, the Übermensch is

able to accept the concept of the Eternal Recurrence of all of life, indeed of all of existence

(including all of human, and animal, suffering from the beginning to the end of history) and

affirm it with a smile on his face and joy in his heart – a difficult thing to do, unless one is either

a sociopath or a moral monster, in our post-Auschwitz world. Nietzsche believed that no human

being could make such an affirmation honestly – we are too “compassionate,” we are

too “sensitive” to the suffering of others and therefore, according to Nietzsche, human beings

end up denigrating the value of life: we can never really accept the world as it is, with all its

enormous, endless and pointless suffering and cruelty and our inevitable mortality. Only a

superhuman might. One may disagree with these ideas, and vigorously so, but one should at least

get them right before submitting them to debate.

Other Cloven Tales of Enchantment,” presented by the Kingdom of Not, which comprises Buddd

[sic] Underwood and The Slow Poisoner. This was a combination live music acts and video

projections with dancing, a kind of nightclub butoh spazzed with satirical relish and a craziness

that dares you to look away – which, given the smallness of the space, I couldn’t easily do.

About midway through the show, there is an extraordinarily powerful sequence in which Buddd

dons a seemingly innocuous mask that, through simple but ingenious lighting, combined with

a darkly demented text and a maze of slow, wild contortions, becomes the very face of evil, a

voodoo of death dancing with obsessive, joyless glee across the world. It was unforgettable and a

sign of a formidable talent. Unfortunately, the numbers flanking the central, grimly entertaining

dance of death felt like fillers and were more abrasive than inspired.

The best is almost always saved for last: the final show I was able to catch before the

crocodile deadline caught me in its jaws was the awkwardly titled “The Good, the Bad and

the Stupid” by the physical comedy troupe Pi. Unfettered by either intellectual or political

pretensions, these highly talented comic acrobats put on a show that was a little mad marvel from

beginning to end. Based loosely on the spaghetti westerns of the 60s (as the title warned), the

troupe found its mojo in one bit of happy lunacy after another. I won’t try to describe what they

did (half the rewards are in their surprises), but you must drop whatever you’re doing when you

hear they’re performing near you, and go. Happiness is more than just a right, after all; it’s a gift

– and they could make you happy for an afternoon, if not Eternally. Really.

webzine Caveat Lector. Examples of his poetry can be found on the internet at “The Bog of St.