Whose Brain Is It? by Leena Prasad

Presented within the flow of the lives of real people and fictional characters, this is a monthly exploration of how some parts of the brain work.

Throw the monkey, I mean the ball…

“Give me that spoon,” Adam says and a moment later he is shocked at his own words. “Plate,” I mean plate,” he says.

His wife smiles. “It is just a small mistake. Don’t look so panicked.”

Adam has not told his wife about his grandfather. Would she believe him? After all, his grandfather was a world renowned writer. Nobody outside the family knew that he had aphasia when he died.

“There is a reason that I panicked…” He tells her about his grandfather.

“Wasn’t your grandfather writing until pretty late into his life?”

“Well, yes. He wrote well into his 70s. But he had a stroke when he was 73 and had a lot of trouble with word comprehension afterwards. He stopped writing and died when he was 75.”

Adam opens up his laptop and looks up the official definition at the website of National Aphasia Association and shows it to her:

Aphasia is an acquired communication disorder that impairs a person’s ability to process language, but does not affect intelligence. Aphasia impairs the ability to speak and understand others, and most people with aphasia experience difficulty reading and writing.

They also learn from the website that aphasia onset often occurs after a stroke and that more than 100,000 Americans have this disease.

“Is it there a genetic disposition?”

“They don’t know if it’s genetic, for sure, but I have read that there are some genetic mutations found in aphasia patients so, yes, there could be a genetic predisposition.”

She starts to ask him about his parents and then remembers that they had died in a plane crash. Adam has no brothers and sisters. Adam is doing more research on the web. “Hmmm… it looks like people with other learning disabilities, like dyslexia, are also likely to get it.”

“Well, I have dyslexia but you don’t… I wonder what that means for the genes we pass on to children that we might have…” His wife says.

He shows her some images on his laptop and explains that the two primary regions in the brain that are affected by aphasia are Broca’s area, in the temporal lobe, and Wernicke’s area in the frontal lobe. Damages to either one or both of these regions can result in aphasia. There are many different types of aphasia depending on the location and degree of damage. According to the American Speech Language Hearing Association: 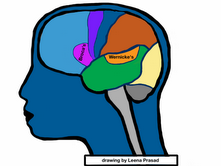 Aphasia may be mild or severe. The severity of communication difficulties depends on the amount and location of the damage to the brain.

“Honey, I am sorry, maybe I should not have told you,” Adam says, when he sees the look of concern on her face.

“Adam, don’t worry so much. We’ll deal with whatever happens.” A few days later, however, she starts to worry. As a television anchorman, words are Adam’s passion and his livelihood. How would he react if he developed aphasia? What about it they decide to have children? Will they be predisposed to this disease? Maybe he should not have told her, she thinks. No, it’s much better to know. At least she would not be shocked and would have some inkling as to what’s going on if it ever happened to him.

Leena Prasad has a writing portfolio at http://www.FishRidingABike.com. Links to earlier stories in her monthly column

One thought on “Whose Brain Is It? by Leena Prasad”