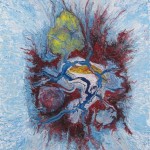 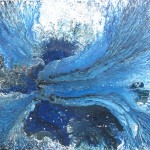 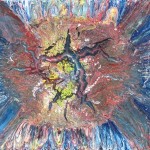 Gravitational Art is God’s not Pollock’s

It is true that I use Jackson Pollock’s painting technique to create Gravitational Art.  The mechanization of the body creating fractal patterns on the canvas mimics forms found in nature, and looks much like looking up at the sky through tree branches.  His process is truly inspiring, but Jackson Pollock and I paint very different paintings.  Jackson Pollock talked about using the mechanization of the body to create forms that are found in nature, but his paintings are a mirror to the nature of the human body’s movement, as much as they are reflections of the natural world.  Using sweeping arm movements, as he threw paint at the canvas and dripped thin lines over each other, there always remained a trace of himself as the creator.  His lines remain distinctly his own, and the movement of his body is evident in each line.  He let each layer dry, and built up a montage of splatters and lines to mimic the forms found in nature.  He never fully relinquished his control over the final outcome of the painting.  This is the leap that Gravitational Art makes.  I use Pollock’s technique to create fractal patterns, mimicking the forms found in nature, and then I paint until the paint is so thick it starts to move to the middle, and fall over the edges.  I paint until there is no trace left of the lines I have made—until the lines are no longer my own, but God’s.

To contact Erik White directly, send an email to erik@erikwhite.com.

As the paint begins to move, the patterns and colors I have used compress in the middle and stretch on the edges, so what we get to see is a frozen record of gravity, moving over time. This process relies on mild temperatures to give the paint ample time to move, and as it dries the cracks that open up reveal the colors that were used to make the effects in the top layers. This reliance on the natural movement of the paint, the air temperature for slow drying, and cracking that reveals a deeper layer of the painting, is a leap of faith. It takes the ideas that Pollock had about what painting should be a step further. The paintings now are not just a mirror to nature, but actually contain the power of nature. Gravity is frozen in the canvas. The Mechanization of the body becomes the mechanization of the planet, and the paint is a record of the natural forces that allow us to live here.

In Pollock’s painting there always remains some piece of himself. The lines are distinctly human. As the mechanization of the body attempts to capture natural forms, there is inevitably deformation of the lines, and pieces which are broken or have large bubbles of paint attached to them. Though this could be said to mimic nature in its own way, as many things in nature form with irregularities, it is a part of Pollock’s process that reveals the human element that is evident when trying to capture nature.

So where Jackson Pollock revealed man’s inability to truly capture the essence of nature through the mechanization of the body, he succeeded in showing man’s imperfection when compared to the intricate perfection in the systems of nature. Gravitational Art shows us God’s perfection. It truly mimics the forms found in nature, by progressing the style that Jackson Pollock created. In Gravitational Art the mechanization of the body that is used to create fractal patterns that mimic nature, is then itself defeated by the movement of the paint. As the paint moves under the force of gravity, the imperfections that were once evident in my painting process are covered over by the collapsing pool of paint. The painting is no longer mine, But God’s. I have no control over the final outcome of the painting. It is simply a matter of time, temperature, gravity, and faith. As I watch the paint dry in wonder over several days, the beauty of the universe is revealed to me. When the painting is done, I am no longer the creator. The Creator of the universe that lives within all things, God has shown his face on the surface of the canvas, and I just marvel in awe at this beauty. There is no way to recreate a single piece of Gravitational Art, because the movement and the cracks that form are completely unique to each piece. I can copy a Pollock, a Van Gogh, a Picasso, or even a Renoir, but I can not copy a single piece of Gravitational Art. Each one is a gift from God, and I am thankful.