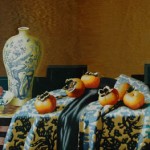 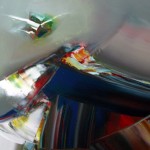 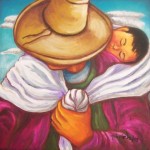 Independent, strong and creative, Alta Gerrey of Berkeley, Californa is a true traveler in the Art Sahara. In the 1960s she started Shameless Hussy Press, the first feminist press ever created in the United States. Such a courageous step was not easy. Especially since women writers faced many struggles then, and were seen as ‘shameless’ for seeking to promote their work.

“Certain topics were not considered serious when I was young,” Gerrey says, “being a homemaker, for instance.  Others were considered shocking, such as lesbianism.  Now women can write – and publish – just about anything!”

Shameless Hussy published over 40 books in the twenty years Alta operated it, from 1969 to 1989. Most authors they accepted were women, including Ntozake Shange and Jennifer Jaffe, and they published a variety of genres, including collections of poetry and a few children’s books. And, they were located for a time in the small suburban East Bay town of San Lorenzo – where Gerrey says she felt safer from people who did not appreciate what she was doing.

Gerrey said she started the press because she and other women writers she knew were finding that mainstream publishing houses wouldn’t accept their work. To her, that was how much of the women’s equality movement got started in the United States – simply through women getting together with their friends and sharing things they noticed about their lives.

Jaylan Salah is a freelance writer and Synchronized Chaos contributor from Alexandria, Egypt. You may reach Salah at vigilante171@yahoo.com.

When asked if women today are given the given the proper opportunities to become recognized artists and poets, Alta insists that nowadays women don’t need to be given anything as they have already proven themselves by making their own paths.

Alta also adds that some of the struggles that women faced in the past were due to some of the men in charge of publishing centers not being interested in their work.

In the United States, back in the 1960’s, as Alta reminds us, 94% of published books were from male authors. And the literary world was often less than excited about celebrating women writers.

“Other [men] wanted to be famous themselves so they could get laid,” she says.

Despite the much broader scope women’s publishing is currently witnessing, Alta still sees the need for women-oriented presses in the US.

“Half the world is women, why not have our own publishing houses?” she says. A niche press, designed to promote a specific kind of book or author, can still survive if there’s still a cultural need for what they do.

Alta’s creativity, as with many poets, is connected to her health. When she resisted writing poems that sprang to her mind, she would get migraine headaches and be immobilized for days.

Unfortunately, health problems are not new in Gerrey’s life. Before her major change in career from poetry to art, Alta was diagnosed with multiple sclerosis. After her diagnosis, and after one of her neighbors went into a convalescent home because their family’s house did not have a wheelchair ramp, she decided to do something to make everyday life easier for those with disabilities. The air of creativity and wind of change struck Alta with the idea of making wheelchair-accessible homes and advocating for the disabled. She spent 15 years (from 1993 – 2005) focusing on that wonderful cause instead of her literary pursuits.

In 2006, Alta started Alta Galleria in Berkeley‘s (residential, family-oriented) Elmwood neighborhood. The change in career wasn’t that hard for her. Neither was viewing the world from the eyes of an artist as opposed to viewing it as a poet.

“Both require the inclination to see from within and look in one’s own soul as well as to look outward,” she says.

Alta picks work to exhibit in Alta Galleria based on whether it is worth the time, effort and money it takes to display it, and that she is willing to look at it on her walls for six weeks. She has to be able to sell it, but she has to like the work, too.

Alta Gerrey’s favorite painting is Don Clausen’s “Still Water”. She has an interesting story to tell about this particular painting,

“We had to trade it away for a van when I was young. It came back to me 40 years later, when a woman who inherited it found me on the internet. I’m thrilled it’s back.”

Alta’s love for Asian art started as a child, when her family took a trip to Chinatown in San Francisco and her father bought her a postcard of a painting of the beautiful Chinese mountains. She saved the painting, along with a page from LIFE magazine showing the Jackson Pollock painting #31. She considers Pollock’s works among her favorites as well, and admires the fractal patterns he has incorporated into his art.

As it has for everyone else, the recession has been harsh for Alta. In 2010 she had to sell the best of her private collection. One of her collectors had to close his business. Her gallery is leaning toward selling the less expensive works and people constantly ask for discounts.

The way people have been creating art in recent years, though, hasn’t changed much. For Alta encourages her artists to follow their own paths.

She quotes Changming Meng, “As long as I can eat, I should do what I love.”

In spite of the let downs, Alta is really optimistic about the future of creative arts everywhere.

“It’s exciting in every country, in every age,” she says.

Being a writer myself, and from a developing country, Egypt, where ignorance along with religious radicalism works against female independence and liberty, I had to ask Alta to give some support to those still fighting for their freedom.

“Pray.  God loves us all.  God is bigger than any nation or opposition you will ever face,” she says.

A devout Christian, Alta tells us about her friend Richard who sees signs of the Second Coming in the way people love their neighbors and do unto others. She supports it with the story of the rescue of the Chilean miners, where people put aside pride, power, and fame to focus on saving them and how the miners themselves were so compassionate and helpful and able to work together.

“Heaven is in our hearts,” she says. “It never goes away and we can learn to love each other here on earth.  It’s not easy, but it’s possible.”

Finally, on a more personal note, I asked Alta to share a favorite memory. It was so good to hear that it was recent, a celebration of a loved one’s birthday, with family, in a 100 year old restaurant in San Francisco.

Family is very important to Alta Gerrey, as raising her two now-adult children is her greatest accomplishment in life.

“Nothing’s more important than your children. And you’ll never know how much work parenting will be – or how rewarding it is – until you have kids.”

Alta closed the interview with her favorite quote from a famous children’s book, “The Little Engine that Could.”  It goes: I think I can, I think I can.

Thank you Alta for such a delightful opportunity to conduct this interview – it was full of beauty, wisdom and appreciation of art.