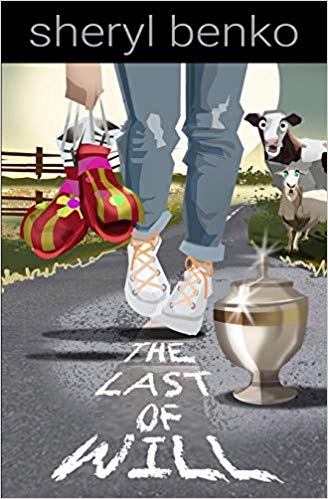 Sheryl Benko’s The Last of Will

If you need some comedic relief, look no further. The Last of Will by Sheryl Benko is full of hilarious antics, witty comebacks and snide remarks. Greer is an eye-rolling, sarcastic teenager that always has something to say. Her family is going through a rough patch. Her Dad lost his job, her mom is trying to keep her floral business afloat, and her sister, well, she has a big secret that she’s keeping from her parents. Greer wants desperately to get her driver’s license, but how far will she go to practice? Her parents are insistent that that Greer take a road trip with her father. On the plus side, Greer gets to drive. On the downside – EVERYTHING.

Read these book excerpts to get a glimpse into the chaos that is Greer’s road trip in The Last of Will:

(Greer calling her sister, Liv, from a Wal-Mart in farm country)

“He’s looking at fishing poles,” I report.
“Why?” Liv squawks. “Dad doesn’t fish. Does he?”
“I don’t think so. But I’m not, like, joined at the hip with him twenty-four hours a day. He may have hobbies.”
Now he’s studying the archery bows. What? Is he planning to go off the grid and hunt his own food?
“That’s probably how the ‘Unabomber’ started,” Liv presumes, having no idea if that’s even remotely true. “He had a meltdown and lived in the woods, which Dad could be planning if he’s looking at survival gear, which means Mom’s gonna flip if you abandon him.”
Abandon? Does she have to use such a harsh word? It’s not like I’m never gonna see him again. I mean, he’ll come home eventually, right? They might sell maps here. I could get him a pocket version. Besides, I don’t think people “plan” meltdowns. That sounds like a more spontaneous thing. Case in point …
“And don’t even get me started on Mom,” Liv drones on, “who’s in such a tizzy with this whole wedding thing, I can barely deal. So you should be glad you’re with the less crazy parent, since Mom’s ready to lose it on that bride, who’s beyond lucky I’m not there, since I would have clocked that bitch by now.”

(Greer trying to convince her dad that they are being followed)

“Dad, I’m not kidding! He’s a psycho midget Eskimo! I saw him, like, three times!”
“All right, calm down,” Dad insists. “First of all, the appropriate term is ‘little person.’”
“Oh come on! We’re gonna do this now?? Our lives are in danger and you want to be politically correct?”
“Indulge me, like I indulge you,” Dad implores. “And if you want to get technical, was he a midget? Or a dwarf?”
“There’s a difference?”
“Yes. Were his limbs proportional?”
“I don’t know,” I admit. “I couldn’t tell, with his parka.”
“He wore a parka?”
“He wears it all the time.”
“Ah,” Dad catches on. “Which is why he must be an Eskimo, right?”
“Ex-actly.”

Continue the adventure and order your copy of The Last of Will on Amazon.

About Sheryl Benko’s The Last of Wil here:

Greer Sarazen is like any teenager. All she wants is to get her driver’s license, to not be bugged by annoying people, and to NOT have her spring break interrupted. Yet, when her dad, Will – who has been unemployed due to downsizing – finally gets a job at the local cemetery, Greer is forced to tag along on a road trip to deliver a stranger’s ashes out of state. A stranded van, a clown, a rodeo, a disco-dancing nerd and a belligerent dwarf threaten to throw off the itinerary, while the departed “passenger” becomes an unexpected friend … proving that, sometimes, the things we truly need are the last things we would ever expect.