A Portrait in Time by Charles Schneider 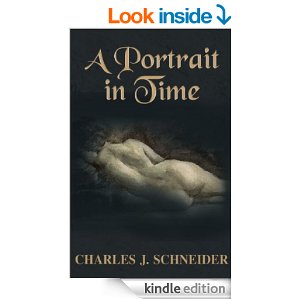 Now these would remain simple facts in art history, unless one reads A Portrait in Time, by Charles J. Schneider. Schneider has taken these simple facts and spun them into a wonderful web involving time travel, a mysterious death, a mysterious theory, and beautiful women who love to pose nude. The M∗A∗S∗H TV character, Radar O’Reilly, once said, “Nudity makes me nervous.” This is not the book for him.

Susanne Bruante is the Assistant Art Director of the Musee de Orsay, one of several famous art museums in Paris. Still beautiful, in her younger days she worked as a nude model, and glories in her remembrances.

Nicole Bruante, who turns out to be Susanne’s great-great-grandmother, looks very much like her–gorgeous. Mysteriously, she is found nude and unconscious inside the museum, beneath Courbet and Degas paintings, The man next to her has had every bone crushed, sending the gendarmes into a tizzy of whodunit.

Lucky coincidence though, allows Nicole to escape the museum and the police, and meet up with Susanne. With the help of Susanne’s sensible Uncle Henri, and modern DNA testing, her family connection is revealed, as well as her role as the model for both Courbet and Degas. Except she claims all the paintings are Courbet’s.

This sends Susanne into a tizzy, because it proves a theory she’s been exploring, a theory she’s convinced will elevate her standing in the museum art world—that the Degas nudes are actually Courbet’s. Finally, she has the proof, yet she’s torn between valuing Nicole for enabling this breakthrough, and envying her historical role as the world-class beauty who is the sensual nude focus of some of the art world’s great works.

This conflict, coupled with the fanciful belief in Time Travel that explains Nicole’s sudden appearance in Susanne’s world, brings this tale to an amazing climax.

Charles Schneider has taken some genuine art history, and combined it with his own spin, a little science fiction, and an interesting cast of characters to create a well-written mystery that stretches between two centuries. Anyone fascinated with the mystique of the nude model and a love of art should read this book.