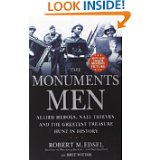 Fidel Castro, long-time dictator of Cuba, once said that he really wanted to be a baseball player. That if only he could have mastered throwing a curve ball, his life story might have been very different.

Similarly, Adolf Hitler, as a young man, wanted to be an artist. Had he not been rejected by the purportedly Jewish board of a prestigious Viennese art school, his life too, and thus the world’s, might have been very different.

Monuments Men, both the movie and the book, concerns Hitler’s later notorious life as Der Führer, when besides attempting to conquer the world, he also maintained his affinity for art by engineering one of the greatest cultural thefts in history.

The movie, starring George Clooney and Cate Blanchett, gets the essential story out to the public. With about two hours time, and a little popcorn, moviegoers find that Hitler was obsessed with collecting the world’s art. All major museums were looted, and boxcar after boxcar, truck after truck left Poland and Paris and Brussels and Amsterdam crammed with the greatest paintings and sculptures mankind could create. In addition, France especially, was home to many private collectors who, because they were Jewish, became prime targets for Hitler’s henchmen.

The Monuments Men were the British and American artists, architects, art scholars, and museum curators assigned to recover these masterpieces in the middle of all-out bombing, savage back-and-forth fighting, and the withering destruction of war. Older than the average soldier, they left good jobs and their families behind, risking their lives to convince soldiers trying to survive that extra effort must be made to find and preserve these priceless symbols of European culture. Needless to say, they weren’t always well-received.

As in so many instances of book versions versus movie versions, the movie comes off second to the book. “Monuments Men” the movie, while commendably getting the story out, just scratches the surface of the book’s reality. All the names have been changed, for example, thus keeping the real heroes out of the public’s consciousness. There are many dramatic moments in the movie, but they are nearly all Hollywood inventions, and not in the book. Plus some of the main actors in the movie are comedians—Bill Murray and John Goodman, for example–which detracts from the seriousness of the tale.

For in-depth intensity, read the book, The Monuments Men, by Robert Edsel and Bret Witter. Here, for example, readers not only know the real names of the heroes, but they know them in depth through excerpts from their letters to their families. Readers learn the sacrifices they made in this endeavor, in addition to how their post-war lives turned out.

The movie gives viewers sad glimpses of the concentration camps. But in the book, the horrors of the camps are so strong, that even General Patton, the toughest of the tough, turns aside and throws up at the human suffering they encountered.

The movie takes viewers down into a mine to discover Hitler’s underground treasure houses. The book develops the detective work needed merely to figure out where the art is concealed, and then gives a much more visceral trip into mine after mine, risking flooding in some, cave-ins in others, and even devastating explosions in still others as Hitler, knowing defeat was near, ordered total destruction of anything the allies might value.

Knowing the magnitude of Hitler’s obsession in looting the symbols of mankind’s artistic achievement is important. Knowing the courage and determination of these unsung heroes, “The Monuments Men” is, in the face of such insane widespread conquest, inspiring.

Short on time? See the movie. Want to know more? Read the book.