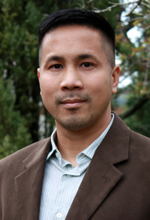 Two months ago, at an enrichment lecture for volunteers at Oakland, CA’s Chabot Space and Science Center, Caleb Cheung led our group of adults in what seemed to be an ordinary children’s science demonstration. We stuck lit candles in wax and placed them underneath inverted jars in bowls of water, then watched as the candles burned inside the jars and water rushed up from the bowl inside the jar.

We formed groups and took turns writing and speaking in front of the group about what had happened during our experiment. Through hastily drawn graphs, charts and diagrams, we showed off what we had seen to the assembled crowd. Depending on our group composition and professional backgrounds, we drew upon explanations from the chemistry of combustion or the mathematical relationships among temperature and pressure in fluid dynamics.

The easy explanation for what had happened was that the candle flames burned the oxygen from the air inside the jar, creating a vacuum which got promptly filled by water from the bowl. So, we followed up the experiment by using two and then three candles. Lighting multiple candles shortened the time that the candles burned before going out and caused the water to rush up in the jar more quickly. However, wouldn’t the water rise within the jar at a steady rate as the candles burned and the oxygen got consumed, rather than rushing into the jar as the air cooled? That was what we would expect if oxygen combustion were the main factor at play here, but clearly the relationship was more complicated.

As former middle school science teacher, and current science manager in charge of implementing new standards for teaching science to preteens in the Oakland, California school district, Caleb Cheung, explained, professional researchers since the time of Leonardo da Vinci are still trying to understand and explain the many processes involved within what is known as the ‘candle experiment.’ The Chabot Space and Science Center itself used to have a book downstairs which showcased many simple children’s science projects, providing a few sentences of explanation for the expected results of each. However, we tossed that volume not long after realizing that its analysis of the candle experiment, and likely other projects, was too simple.

Caleb Cheung pointed out that having us participate in that experiment was meant to illustrate new ways that schools within the United States teach science, according to the next generation of science standards (NGSS) currently adopted by 26 states. Science education is moving towards having students participate in hands-on investigations, learning how scientists go about testing hypotheses and inquiring about knowledge within the various fields of scientific and technological research. And having us, as adults, draw upon our scientific knowledge to construct mathematical and conceptual models of a complex system with multiple factors at play gave us the sense of what it might be like to be a student in a modern science classroom.

The new science standards incorporate engineering and design methods and ways of thinking that make sense within those disciplines rather than just imparting sets of factual or theoretical knowledge. This is because recent advances in engineering, both with software and with physical materials, have made educators aware of the need to prepare students for careers in the field. The standards also focus on imparting general attitudes and patterns of thinking and of investigating and organizing information that apply to different fields of physical science, in hopes of preparing students for whatever scientific fields will hold promise when they are ready to begin their careers. The emphasis on broad, inter-related concepts also gets students ready for interdisciplinary work, where insights from one field may prove valuable for another area of science.

While participating in the candle experiment, I consciously told myself to model and report on what I actually observed, rather than letting my preconceived ideas of what I expected to see based on my high school and college physics courses get in the way. That open mindedness served me well as Cheung chose that experiment because the scientific questions involved here did not have easy textbook answers, and simply reciting an equation or standard answer would have limited my understanding. But, the physical system could still be better understood and described through mathematical models of the kind that professional researchers would use in a laboratory.

Having attended various schools as a preteen, I have experienced basic science being taught both in very hands-on, group-oriented, investigative and open ended ways and very rote methods based on imparting facts. While I learned from both approaches, at times the open ended education left us frustrated and confused as we did not have the factual or methodological tools to begin to formulate the right questions or begin to answer them through investigative techniques. However, the rote factual educational techniques left us unprepared to apply the information in different contexts or think about the information being useful in different disciplines.

So I found that I learned the most in classrooms with a combination of these styles of teaching, where we first received some background into how the world worked according to the best of our knowledge and into how to carry out certain investigative techniques, and were then left to apply the techniques to new and complex situations, drawing upon our knowledge and organizing the information in a clear way. In the workshop where we tried out the candle experiment, most of us in the room were educated adults, some with professional science background. So this is in effect the situation that we had, which is perhaps why the experience was so rich, educational and provocative.

More on the candle experiment here.

More on the Chabot Space and Science Center here.