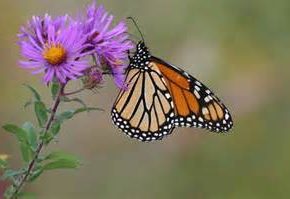 Butterfly and Milkweed in Maplewood, Missouri
A small city on the outskirts of St. Louis has ordered Alice Hezel to pull the swamp milkweed out of her yard because the city says it’s a weed and weeds aren’t allowed in Maplewood, Missouri.
Maplewood is a city in recovery thanks to an influx of nice restaurants, a microbrewery and an Apple computer store. But it’s not a town where the rich and famous live. Real folks live there.
The directive by the city may lead to pickets by the Monarch Butterfly as well as nature sympathizers because the swamp milkweed, along with other types of milkweed, is one of only a few places the Monarch will lay its eggs.
Some believe the Monarch is still an endangered species and that North America must do all it can to welcome these refugees from Mexico. They breed here in summer and then go home to hibernate in winter.
There are many beautiful large butterflies but few more beautiful than the Monarch. Its wings are a striking medley of orange, black and yellow, a welcome display of nature’s beauty in the United States and Canada. The people of North America would miss the Monarch if it disappeared.
Alice Hezel, the swamp milkweed gardener now going to court, is a warrior for conservation in Maplewood. More than a few citizens feel that the city should rescind its order and leave her and her swamp milkweed in peace. Taking her to court over a matter like this makes little sense but a date for the trial has been set.
We don’t want to deport the Monarch or have it go extinct on our soil. And we don’t want to build an invisible wall against the Monarch breeding by ridding our yards of swamp milkweed.
The Monarch doesn’t need a passport. It delights everyone fortunate enough to see one. Let’s save the Monarch so our descendants will have a chance some day to see its descendants.

Donal Mahoney, a product of Chicago, lives in exile now in St. Louis, Missouri. His fiction and poetry have appeared in various publications, including The Wisconsin Review, The Kansas Quarterly, The South Carolina Review, The Christian Science Monitor, The Chicago Tribune and  Commonweal.  Some of his online work can be found at http://eyeonlifemag.com/the-poetry-locksmith/donal-mahoney-poet.html
The Ronald and the Pyramid Scheme
Sonya was Ronald’s sixth wife. It was no secret that like his wives before her, Sonya had married him for his money. Most of them, like her, had emigrated to the United States from Europe. It seemed European women had greater tolerance for living with Ronald, thought by many to be a boorish American billionaire At least three of his wives bore him children before divorcing him and acquiring a big settlement and alimony for life. One of those women never called him anything but “The Ronald,” which name became public over the years and was used occasionally to mock him in the press.
“I have no idea why she called me that,” he once told a reporter. “But it has a nice ring to it, don’tcha think?”
The divorces usually occurred shortly after the wives would discover that Ronald was cheating on them with a woman younger and more beautiful than they were. He had a pattern of doing this. After a wife would divorce him he would marry the latest paramour and later on she would divorce him as well. For a brilliant and wealthy man, apparently the irony of this pattern never struck him. He simply kept doing the same thing and ending up in Divorce Court. His former wives were all living nicely now on Ronald’s money.
“I try to treat my women well,” Ronald told another reporter, “even when they have outlived their usefulness.”

END_OF_DOCUMENT_TOKEN_TO_BE_REPLACED

A Gathering of Generations
An old man, a poet of the generation of Kerouac, Corso and Ginsburg, is at the lectern tonight in the auditorium of a small college nestled in the Ozarks of Arkansas. Although widely published for many years, both in the United States and abroad, he has never done a reading of his work. He attended a reading once, back in the Fifties. It was held in San Francisco and given by Gregory Corso. All the literati of the day were there, a number of them under the influence of one thing or another. But the reader tonight was so bored he swore he would never do a reading himself.
Not one to fraternize with other writers, the poet usually stays home with his African Grey parrots and Scarlet macaws. He writes at an old roll-top desk in what a romantic might call a garret, which he says is just a drafty attic over his old garage, part of an estate he inherited from his parents. He writes, off and on, day and night because he sleeps very little–two hours here, two hours there. He disdains liquor and dope but is a souse when it comes to milkshakes.
Tonight his friend of many years, an old professor at a local college, has asked him to read. The professor, almost as old as the poet, assumed the man had read his work often at various venues. The old poet for some reason agreed to do the reading. Maybe the money was attractive, although the honorarium was small. Long ago the poet’s four books had been remaindered and now money in any amount helps. Seed for the parrots and macaws adds up. He lives on Social Security and an annuity given to him by his parents long ago because they figured he would never be able to earn a living. They were right.

END_OF_DOCUMENT_TOKEN_TO_BE_REPLACED

Why Did You Write That?

Anyone who has written fiction or poetry probably has been asked at one time or another, “Why did you write that?” I’ve been asked that question and I have never been able to provide an answer.

Some writers may set out to write a poem that will address an important question about life, such as who we are as human beings and what purpose, if any, we have on Earth. I have never tried to write a poem like that. Nor have I ever written a poem knowing in advance what it might say. I just write down “words” that come to me, provided I like the way they sound and like their “rhythm” when heard together.

I might be sitting in a diner or in my living room and “hear” a few words that sound as though they belong together and so I jot them down, often on a napkin or scrap paper. Maybe an hour or a week later, those same few words will “give birth” to a few more words that seem to fit with their “parents” so I add them to the scrap paper.  When I have enough words, I make my first conscious decision to do something with them. I add verbs or nouns and whatever else is needed to add structure. Eventually I have sentences which I then break into lines, according to sound and inflection. End breaks are important to me. Next I try to determine what the poem, if anything, is trying to say. And that’s not always easy.

I have never been impressed with adjectives and adverbs. I like concrete nouns and strong verbs that drive those nouns wherever they need to go. Sometimes they never go anywhere. Sometimes they “sleep” for a long time, technically alive, but not developing into anything. It’s as if they were an ovum needing semen to become an embryo. But no matter how long a group of words may lie dormant, I never abort them because some day I may know what to do with them and they might develop into a poem.

END_OF_DOCUMENT_TOKEN_TO_BE_REPLACED

A Note to Young Writers
Over the years I have been accused of many things in real life and in the virtual world as well and often deservedly so. Recently, however, I sent a few poems to an editor unknown because samples on his site suggested to me that these particular poems, rejected by other editors as not fit for their sites, might find a home there. One never knows and can only try.
These poems were scabrous enough, I thought, to have a chance at this site but they lacked profanity, sex and violence. I am neither in favor of nor opposed to profanity, sex or violence but I don’t knowingly traffic in any of those when it comes to writing.
Sex is too easy to write about, I feel, and profanity seems an easy way out when the right word can’t be found. Violence I don’t think I have ever dealt with although I have dealt with the prelude to violence as well as its aftermath. I guess it’s all a matter of taste.

END_OF_DOCUMENT_TOKEN_TO_BE_REPLACED

Back Then and Write Now

When I began writing in 1960, there were no website “magazines.” Print journals were the only place to have poems published. Writers used typewriters, carbon paper, a white potion to cover up mistakes and “snail mail” to prepare and submit poems for publication. Monday through Friday I’d work at my day job. Weekends I’d spend writing and revising poems. Revising poems took more time than writing them and that is still the case today, decades later.

On Monday morning on the way to work, I’d sometimes mail as many as 14 envelopes to university journals and “little magazines,” as the latter were then called. Some university journals are still with us. Some are published in print only and others have begun the inevitable transformation by appearing in print and simultaneously on the web.

“Little magazines,” especially those published in print without a presence on the web, are rare in 2012. One might say, however, that their format has been reincarnated in hundreds of website publications that vary in design, content and frequency of publication. Depending on the site, new poems can appear daily, weekly, monthly, quarterly, semi-annually or annually. For many writers, these websites are a godsend. Some “serious” writers, however, still feel that a poem has not been “published” until it has appeared on paper.