A Beanstalk Grows in Oakland 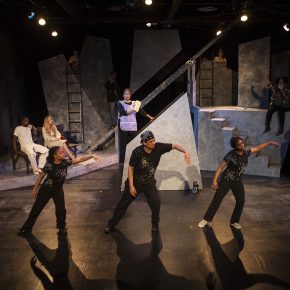 What would you do if you woke up one morning to discover that a skyscraper, all glass, steel and corporate facelessness, had appeared on your neighborhood block literally overnight, like Jack’s fabled beanstalk?

Would you question your sanity? Start a riot? Burn it down? Apply for a job there?  All of the above?

The world over, this has become hardly a fantasy in many people’s lives: in China, entire “megacities” have sprouted in little more time, some of them still awaiting their first inhabitants, ghost cities, cargo cults of the wishful thinking of bureaucrats and over-zealous developers. Shanghai, Guangzhou, Dubai, Tokyo are well-known for big buildings going up with unnerving speed.

Even in the Bay Area it’s hardly an exaggeration, as entire neighborhoods in San Francisco are transformed from low-rise villages to immense forests of office and condo towers within months.Oakland has now become an increasingly tempting target for this megalomania of construction: in 2017 alone, more than half a dozen high rises are under either construction or planning review between Telegraph Avenue and Lake Merritt. In recent years the city has suffered from one of the highest rates of rent increases in the country as people flee from, or bypass altogether, what has become an onerously, even preposterously expensive San Francisco. Wherever domiciles become unaffordable the master builders soon invade.

Among the populations fleeing San Francisco for her sister city to the east have been artists and dance and theater groups, which “The City” for so long welcomed and now makes it increasingly difficult for them to subsist. So it is both timely and poetically just to have a play in, by and about Oakland that tackles these and the related tangle of urban issues.

Overnight, playing at Oakland’s intimate and stylish downtown theater, The Flight Deck, does so, with energy and heart. The omnibus of three short plays wrapped in pre-, post- and interludes of wordless movement and dance proves also to be an effective way to combine efforts by the four companies that call The Flight Deck home. So kudos for cleverness and timeliness, and to Ragged Wing’s enterprising executive director Anna Schneiderman for conceiving it.

The show, if a little rough around the edges, is engaging and on point. In “Talk to Me” (Theatre Aluminous; written by Sango Tajima) a young black homeless artist who tags buildings around town with graffiti murals of conflagrations is confronted by a middle-aged woman Asian building caretaker, on her first day on the job, who needs to keep him from defacing of her building or she’ll lose her position. Their confrontation takes place in the shadow of the crystal-garden high rise that just appeared overnight.

A certain predictability in the situation and how it develops (economic, and implicit racial, collision between the poor is assuaged in the end by sentiment and class sympathy) is saved by the believability of the fumbling dialogue between these two souls, one at the bottom of the social heap, the other a hand’s breadth above it, and by the persuasive acting (special mention must go to Lily Tung Crystal, who is entirely convincing as the caretaker), which obscure the tenuous realism of the situation and a too-tidy conclusion.

“Manifest” (Ragged Wing Ensemble; written and directed by Addie Ulrey) is the most intricately, and wittily, written of the three plays. Two young faux-jaded hipster baristas at the Manifest Destiny Café act as a world-weary chorus, weaving a skein of witty observations about their customers: an overly earnest liberal lesbian named Alex (played with great accuracy by single-named Fenner), wracked with indecision and guilt over typically liberal issues (“Am I politically correct in all I feel and do? What do I do when all of my impulses (in this case, a lust for expensive, probably NOT fair-trade coffee) fly against my social conscience? Is it OK to feel guilty – and be bad anyway?”); her older Hispanic lover who sits at the café catching “moments” of romantic memories and packing them away in little plastic bags she intends to take with her when she flees Oakland for Minneapolis; and a young black female real-estate tycoon friend (a first-rate Venus Morris) of Alex the liberal, whose only concern about the instant skyscraper that shot up overnight across the street from the cafe (the baristas hardly notice it and, when it’s pointed out to them, bat their eyes with a shrug that breathes “Whatever!”) is that she wasn’t in on the deal that “grew” it.

Fire (which turns out to be the evening’s central metaphor) is pulled in to this story as well: one building is built, another is burnt (though not to the ground) as the result of the guilty liberal’s conscience run amok, the real estate tycoon discovers her partner did her wrong in the instant high-rise deal, and the two detached baristas, in a world that will always need its coffee, get the last word.

The final play of the trio, “Ticky, Ticky, Boom!” (Lower Bottem Playaz; written and directed by Ayodele Nzinga) brings together two homeless black men, young Under and the elder, Upper (who believes he is, and who may be, God), living on, and under, a street bench, and a hopelessly self-absorbed, entitled young blond named Becky who has just been dumped by her rich fiancé and has her compassion (which she has hitherto not, apparently, had much occasion to exercise) tested.

Unbeknownst to her, Becky exudes a profound cold (there is nothing colder than lack of compassion, as Upper points out early in the play) that slowly freezes first Under, and then Upper, into a coma until the young woman at long last gets it – and taking the hint, sets herself ablaze with a cigarette lighter (things become obscure at this point; this seems meant to be a metaphorical fire of compassion, not a suicidal auto da fé), in a fire that brings the two men—or man and God—back to life.

Becky on fire was a good metaphor and a powerful stage image; but it was an awkward stage action, as the motivation for her change of heart, or discovery that she has one, was not made sufficiently clear to make her self-immolation credible. A mis-step, though curiously a memorable one. (Unanswered questions have a way of nagging at the mind more persistently than the most convincing answers.)

Before and between the three plays, and at the very end, the audience was treated to wordless dance and movement pieces by Gritty City Repertory Youth Theatre, with effectively mood-setting choreography by Lindsay Krumbein. Music for the complete performance was provided by Kev Choice and sound designer Ella Cooley.

When we left the theater, it was raining buckets. A homeless person skittered from storefront to storefront, seeking shelter, as someone shouted at him down the street. A café winked drowsily on the opposite corner. Two over-dressed blonds tripped sulkily across the flooding gutters. Then we looked up and saw, looming in the darkness, a skyscraper half-grown on the next block.

Had it been there before we went in? It must have been, we laughed nervously, of course, we just hadn’t noticed it . . . Then we ran through the rain to the nearest subway entrance just in time to escape another cloudburst.

Christopher Bernard’s new book, Chien Lunatique—a collection of poems that address many of the crises of the twenty-first century—will be published in May, with launches at Diesel, A Bookstore, in Oakland and The Beat Museum in San Francisco.