Songs About an Old Man and the Daughter He Betrayed 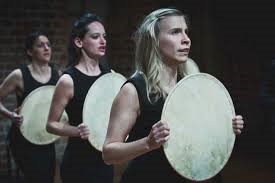 Scene from “Songs of Lear” (Photo by Z. Warzynski)

Song of the Goat Theater

Tragedy can be said to succeed or fail by the power of its logic. And that logic, in the theater, is linear and rigidly chronological. It is as harsh and clear as a syllogism: if the folly of x happens today, then the horrors of y will happen tomorrow.

Attempts to break with linearity are in danger of spoiling the tragic effect: the catharsis – the purging of pity and terror – that lies at the heart of the peculiar satisfaction tragedy affords. Shattering and reshaping “the linear” has its own satisfactions, as can be seen in postmodern aesthetics at their most audacious and skillful, but the tragic effect is not always one of them. This basic strength, or weakness, of tragedy is exemplified in the work under review, which attempts to pierce to the “essence” of Shakespeare’s vision; though, as sometimes happens, when you strip away supposed inessentials, sometimes the essentials volatilize almost entirely away.

Not that the effect here is not theatrical in the best sense. And, as a work of music, it is completely successful. Here is a case where creating the right expectations is essential to effecting the right satisfactions.

“Songs of Lear,” which Cal Performances brought to Berkeley this weekend, is, in fact, not a work of musical theater so much as an oratorio with movement, sometimes pantomime, sometimes fiercely chthonic dance, and a narrator, a “guide” who sets up each scene; in the case of this performance, the warm and welcoming director, Grzegorz Bral. The music consists of a song cycle for soloists and chorus in twelve numbers, expressing some of the dramatic high points of Shakespeare’s drama; in one or two cases, inventing scenes implied by the story. It was developed by the Polish theatrical company Song of the Goat Theater, headquartered in Warsaw; the company was once under the aegis of the Grotowski Institute, and the influence of Grotowski’s explorations into what he called “objective drama” and voice work seems clear.

The work premiered at Edinburgh’s Fringe Festival in 2012, where it won several important awards. The music includes Renaissance church polyphony, Corsican folk music (a style immediately recognizable to aficionados of Bulgarian and other Eastern folk music, with which it has strong similarities), and original music by Jean-Claude Acquaviva and Maciej Rychly; the music moving from the historical western forms, which dominate early on, to complete domination by the even more ancient folk forms at the performance’s stark conclusion.

(To be strictly candid, the musical tapestry moves from a simple figure, performed at the very beginning to establish tonality among the (for the most part) a cappella singers, through the evolution described, back, at the very end of the tragedy, to a reiteration, with subtle elaboration, of that first simple figure, a musical symbol of the circularity of time and the eternal recurrence of history.)

As music and a form of dance, “Songs of Lear” is absorbing, often moving, with its sharp and soaring vocal lines, its engulfing polyphony, its driving rhythms, its stabbing emotions of love and loss and betrayal. But as an attempt to encapsulate one of the most searing dramas in theatrical history, I felt it distinctly over-reaching; like sign pointing earnestly at something called “Tragedy” rather than its overwhelming embodiment in the here and now. It may perhaps be better for the spectator to know nothing of King Lear before attending; you will have no expectations and therefore no disappointments.

Too much is left out for those burdened with memories of the play: the scenes of Lear’s madness on the heath, for example, which one waits for in vain; the subplot involving the Duke of Gloucester and his sons Edmund and Edgar; and much of the story involving the betrayals by Cordelia’s sisters, the hypocritical and stony hearted Goneril and Regan; Lear’s deepening madness itself is more hinted at than portrayed. What is meant to be “essence” can easily shrink to the merely schematic (an occasional fault of the Grotowski school of theater elsewhere).

Two further criticisms: first, the use of Latin and Christian liturgical polyphony. Shakespeare’s play is based on a legend going back to pre-Christian Britain; there is the merest hint of a Christian civilization in the play itself, and no hint of an afterlife in the play’s metaphysics. The play is starkly this-worldly; the religious haze created by the music early on suggests a possibility of transcendental redemption the play itself does not pretend to; even eliminates.

My second criticism is the “guide,” part lecturer, part narrator, a role that seems an afterthought and does not feel convincingly integrated into the production. I felt that either the role should be eliminated entirely or, if not eliminated, made an integral part of the presentation; in the performance I saw, the guide’s regular intrusions, instructions and underscorings of points being made, detracted from the tension that a drama of the magnitude of King Lear has every capacity to generate, even in a reduced version as presented here.

The twelve songs are performed by a dozen singers, half male, half female, some of the singers doubling on instruments. The emphasis of the songs is on the damaged relationship between Lear and his daughter Cordelia, played by three different women (if my count is accurate; at least, it is more than one), with another of the six women playing the Fool. The last felt like a mistaken bit of casting; not that the woman wasn’t fully equal to the part—she was—but the men onstage needed more to do; this is a feminist production almost to a fault. A younger man plays the vanishingly small role of the Earl of Kent, an older man the maddened, and maddening, old king.

We are warned in the program that this is a “non-linear” presentation of the play. So it is not a surprise that the “scenes” do not always follow those in the drama; for example, Cordelia dies before Lear goes mad, though in the play this happens in reverse; it is precisely Cordelia’s death that brings the old man back to reality. Lear’s mad ramblings on the stormy heath get short shrift – an odd decision, as those scenes are certainly among the most memorable in theatrical history. Lear without the heath is a little like Hamlet without his soliloquies; he just becomes one more crazy old codger abusing his family.

If you attend this production expecting an oratorio roughly based on the story of Lear and his daughter Cordelia, and forget the rest of the play – in other words, forget “King Lear” altogether, and just see “Songs About an Old Man and the Daughter He Betrayed” – you are likely to have a very satisfactory evening. I, unhappily, was unable to clean Shakespeare’s mad, demented domestic tyrant and the overwhelming violence of his fate from my mind. The music will carry you to music’s rapture; the discreet choreography has undeniable power; and the performers are altogether winning in both movement and song.

Christopher Bernard is co-editor of the webzine Caveat Lector. He writes on dance, art, theatre and literature for Synchronized Chaos. His latest novel, Meditations on Love and Catastrophe at The Liars’ Cafe will appear later this year.