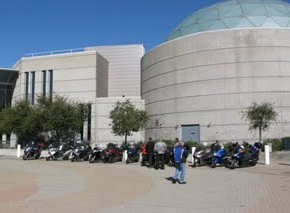 — by Cristina Deptula
Last week, our own Joel Thomas came to talk to Chabot Space and Science Center staff and volunteers about the history of our understanding of light and time. His lecture, Galileo, George Washington and the Speed of Light, began with a discussion of Galileo’s observations and how they supported the Copernican, sun-centric model of the solar system. Through his telescope, only 30x magnification, Galileo saw the moons of Jupiter, craters on the Moon, sunspots, and the phases of Venus, which suggested that the planet was orbiting the sun.
Understanding that our planet rotated around its axis and revolved around the sun allowed for us to calculate where we were by observing the sun’s relative position in the sky. Latitude could be determined by looking at the sun’s altitude at your local noontime and comparing it to figures in declination tables, which recorded how much the sun’s position varied with distance from the equator. Figuring out longitude was possible because the earth rotated at a steady speed, 360 degrees a day, 15 degrees per hour. So if you compared your local time to Greenwich Mean time, you could see how far you had traveled in an east-west direction. This is a similar idea to knowing that you’re in an eastern state if you are three hours ahead of California time.
Longitude was more difficult to determine as it required accurate measures of time, which were often hard to come by at sea or on long journeys. Astronomers, including Galileo, proposed that we could calculate time by using telescopes to track objects in space that moved in predictable patterns, such as the moons of Jupiter. These methods, although imperfect, assisted navigators and surveyors, including George Washington, until clockmaker John Harrison finally built a marine chronometer that was physically hardy enough to tell accurate time at sea.
When scientists understood that sunlight traveled through space to the parts of the earth that faced the sun, they wondered how light moved and how quickly it could go from one place to another. Some people guessed that the speed of light was infinite, as it was faster than anyone could quantify using lanterns, clocks or other technologies of the day. Astronomer Ole Roemer thought that light speed must be finite, because he observed differences in the orbital periods of Jupiter’s moons when Earth moved towards or away from the planet. He explained this phenomena by saying that light took extra time to reach us when we were farther from Jupiter and calculated an estimate of the speed of light given that extra time.
Roemer estimated that light took 22 minutes to travel through the diameter of the Earth’s orbit, so theoretically light speed could be calculated by dividing the diameter of the orbit by the time difference. His friend Christiaan Huygens did the calculation and came up with the best estimate anyone had developed for lightspeed up to that time, although the figure was off due to inaccuracy in the figure for the orbit diameter.
Over time physicists developed better technologies such as atomic clocks and lasers to determine the speed of light more precisely. The figure of 186,000 miles per second became common knowledge decades ago and in 1983 the International System of Units fixed that value as the official speed of light to be used for navigation and scientific research.
Joel Thomas ended his talk by pointing out how people could measure the speed of light in their own homes with a microwave and a stick of butter. Given the structure of a wave, the speed is equal to the frequency (the number of complete waves that pass by any given point per second) times the wavelength (the length of the wave from crest to crest). Most microwaves will list the frequency of the waves they emit in the owner’s manual. As for wavelength, if you remove the turntable and place butter sticks in the microwave for a few seconds, you will see small bubbles from the areas where the waves crest and thus provide more energy to melt the butter more quickly. Measuring the distance between the bubbles gives you the wavelength, which you then multiply by the given frequency for your microwave to estimate the speed of light. Microwave radiation is also on the electromagnetic spectrum along with visible light, sound, X and gamma rays, etc so this calculation will also apply to light.