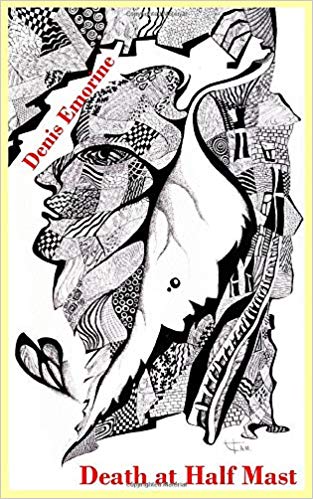 Dominique Valarcher teeters between extremes, always somewhere in the middle. The professor protagonist of Denis Emorine’s literary novella Death at Half-Mast, he carries a name that in his native France is gender-ambiguous. His mother’s first husband had hoped to have a daughter with her before dying in a concentration camp, and would have given her that name. This leaves Dominique with the idea that he has two ‘fathers’, his actual father and the man who gave him his name.

Hence, he exists simultaneously in two realities, a theme that organizes and propels the novel.  At the beginning, Valarcher reflects that his children are the same age that he and his wife Laetitia were when they met. He positions Nora, the young student who admires him and writes a thesis concerning his work, into a duality as well. She reminds him of the deceased Russian actress Tatiana Samoilova, persecuted and driven to despair by the Stalinist regime. This resemblance repeats and reinforces the motif of tragedy, oppression, and the loss of what might have been, in a somewhat mythical past that enters Valarcher’s life when he discovers his name’s origin. Even when love, study or attraction keeps it at half-mast, death is still present.

Much of the story revolves around Dominique’s internal life. He thinks of and relates to others in ways that stem from the role they play in the mental narrative he constructs for and about himself, rather than observing them as distinct people in their own right. He laments his daughters’ lack of interest in his literary writing. He thinks of his blood father, who raised him, as an interloper. He remembers a passionate night with his wife after she returned from being away somewhere with great nostalgia – along with the fact that he never asked where she’d gone.

Most notably, he agonizes over whether to leave Laetitia for Nora, which he sees as a traumatic moral decision he must make, before he receives any clear indication from Nora that she cares for him beyond friendship. He shows some self-awareness when he observes a male student looking displeased at his interactions with the young student. When it occurs to Valarcher that the young man might be Nora’s boyfriend, it occurs to him that he knows almost nothing about her.

Death at Half-Mast ends before Valarcher makes any sort of decision, leaving him face-down on the couch at his friend’s country retreat. This ending shows that the story isn’t so much about what he decides but about who he is.

Firmly ensconced within French and Hungarian universities, all the novel’s characters meet each other and continue to interact within the academic environment. The book’s language, however, is readable and the plot relatively straightforward, accessible to all those who wish to probe the travails of a man caught between shifting realities.

Death at Half-Mast by Denis Emorine is available here.