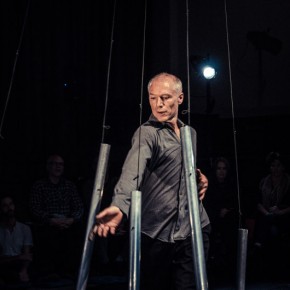 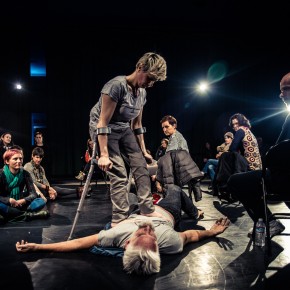 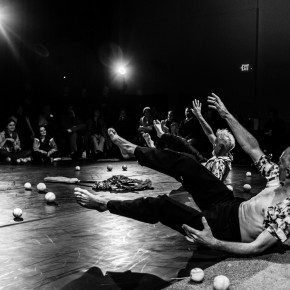 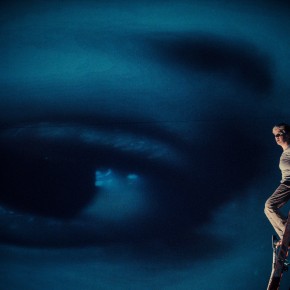 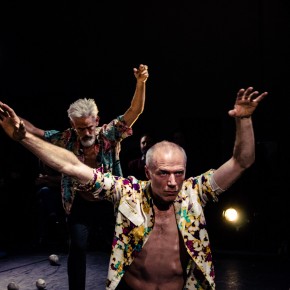 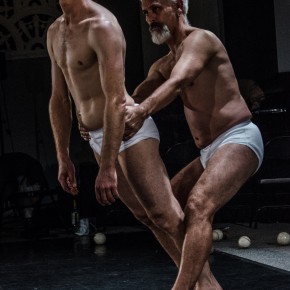 (all pictures by Robbie Sweeny)

When I think of modern dance, I think of something like ‘literary fiction’ in novels: material meant to instruct and comment on society more than to entertain. And Jess Curtis’ show Gravity, which I saw at San Francisco’s Gray Area Grand Theater on Sunday December 13th, definitely lived up to the first objective.

The show left me with thoughts on the nature of performance, human relationships and the theory of mind that became much more clear after I stayed for the talkback with the dancers and UC Berkeley philosophy professor Alva Noe and when I later read more online about Dr. Noe’s theories. Yet, the evening also included fun, laughter, humor and mystery, which became apparent once I understood intellectually what the troupe hoped to accomplish.

During the first section of the show the audience sat on pillows on the floor of the small venue and the dancers pranced and gyrated through pathways around our seats. Scottish artist Claire Cunningham joined Curtis and another male dancer and moved with the aid of crutches. I watched this scene attempting to understand what point they were making: that Claire’s movements were just as lovely as the others? that she was out of place in, or equally a part of, a world made for able bodies?

Then, the group announced that they had been moving all around us for a reason: we naturally noticed anyone who was physically different, such as Claire. But most people have been taught that it’s rude to stare, so we look away once we think that the person we see knows that we’ve noticed them. However, we’re still curious, so we try to find a balance by keeping the ‘different’ person just on the edge of our peripheral vision. So, the troupe invited us to watch the rest of the scene by keeping all three performers in our peripheral vision, and to do a push-up if we either lost sight of them or accidentally saw one or more of them head-on. My neck, and arms, received a workout that evening, and I heard the reminder that the people in our world who are different see and acknowledge how we interact with them, even in passing.

Subsequent pieces also played with the concept of audience engagement: a scene where the dancers disappeared behind a curtain and invited us to indicate our interest level in the show by calling out numbers and counting as a group from one to five. Anyone could start by saying ‘one’ and anyone else could either remain silent or raise the count by calling out ‘two’ and so on. Once someone called ‘five’ then the scene would stop. We were also allowed to call out random nouns to add to the whimsy of the piece. During this act, the performers stayed out of view and rolled balls out to the stage. Since we were seated within the action, and encouraged to participate, I found myself irresistibly tempted towards some unorthodox engagement and tossed a nearby baseball back out to the middle of the floor. Other members of the audience laughed and moved the piece closer and then farther from the end, finally halting the show after several minutes. Later, Claire Cunningham walked on top of Jess Curtis, supporting some of her body weight on her crutches. Voice-overs asked us to judge whether he were being hurt or enjoying the experience.

Finally, accomplished French juggler Jorg Muller came out and gave us quite a show, catching and releasing metal tubes suspended from a mobile. Some people in front of me mentioned that they were also circus arts performers and had come to see Muller’s piece, and that he was quite well known in juggling circles.

This entire show seemed to grapple with questions of appropriate audience engagement, on stage and in life. How can we interact with strangers with disabilities without either staring or ignoring them? (Perhaps looking them in the eye and nodding briefly, as we would for anyone else?) How much does an audience’s interest level affect performers and a show itself? Should we intervene if we think we see something harmful happening, and does it matter whether we fully understand the situation? How do our minds ‘juggle’ all these complicated questions?

Alva Noe’s philosophical writings, as I later found out, put forth the idea that our experiences of external reality arise from what we see and experience, rather than just coming from within our own minds. Noe believes that the outside world and what we see and hear and touch affects how we view the world as much as our own physical brains and our own internal ideas, that who we are arises from the interplay of factors outside and inside ourselves. This dance performance was intended to illustrate those ideas by merging performers and audience and having us shape and direct the course of the show. At times, when we thought we were just watching the troupe, they were actually responding to our motions and gaze and changing their movements accordingly, in a conscious and subconscious interplay of bodies and minds.

In order to enjoy and comprehend this show, I needed both the physical movement and visceral experience and the intellectual breakdown of ideas. The movements would have been confusing and less interesting without the philosophy and the ideas themselves would have had less impact and been dry if presented in a lecture format with no accompanying dance. However, I feel the troupe could have done more with Dr. Noe’s ideas, explained them and their connection to the dance in further detail during the audience talkback session at the end. I was personally motivated to read up on the professor’s work after the show, which greatly enhanced my experience, but not everyone may have done that and having some material presented more explicitly would have provided that opportunity for everyone.

More on Jess Curtis and the concept behind Gravity here.

Dr. Alva Noe’s website, and information on his work within the philosophy of cognitive neuroscience.