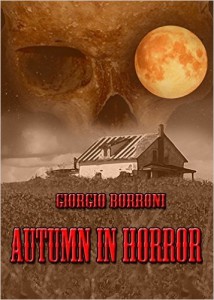 He picked up a hammer, looking at it as if struck by a brilliant idea: “Can I play with him? Can I nail him down like Jesus?”

Jessica smiled, shaking her head. Now more than ever, they looked like siblings.

“Come on, you idiot!” she told him, “Use the duct tape instead. We’ll tie him to the chair and we’ll make him spill the beans so he’ll tell us where he keeps the money.”

Alfio saw them tie the old man’s hands behind his back, whose thick white hair dangled over his chest, then they moved on to the ankles, which were fastened to the chair’s legs.

When they finished, the light of the crystal chandelier, covered in spider webs, trembled and turned off for a couple of seconds before turning back on again.

Alfio realized that he was not dreaming: this wasn’t a junkie delirium. Everything was happening for real.

This room with rotten green wallpaper seemed to squeeze him, he felt as though his lungs were deprived of air.

While cold sweat dripped down his forehead and locks of hair stuck to his temples and cheeks, he struggled to breathe oxygen, but more than ever that sickly and rank smell turned his stomach.

He looked at his hand, which was still holding the crowbar. It was his own, but by now it hurt because of how much he was grasping it, and he shivered like a leaf.

He scrutinized his crowbar up to its curved end. It was dirty with blood.

He dropped his tool to the floor and the metallic noise made him turn towards the two siblings.

“Welcome back among us!” Jessica exclaimed, and Maicol with red cheeks jeered, giddy with frantic excitement. The old man emitted a long wheeze, then slowly began to raise his head. His eyes were half closed and he was making a gurgling sound. Alfio gritted his teeth: that had happened because of him.

That right eyebrow wound dripping blood down half of his wrinkled face, coloring his silvery and thick beard bright red, had been caused by him.

The old man slowly opened his two dark fierce eyes, while his bushy eyebrows frowned showing the bloody cut: a red drop forced him to close his eyelid.

“He looks like Popeye!” Maicol said laughing, but the gurgling of the old man turned into a hoarse and menacing voice: “Who are you, sons of bitches?! Release me immediately!”

“You would like that, wouldn’t you?” Jessica commented while lighting a cigarette.

The old man began to struggle in his chair, making it move from side to side. Alfio, as if awoken from his lethargy, made a tentative step towards the prisoner and said to him: “Stop it, you might get hurt!”

“Why don’t you bring him a coffee, while you’re at it?” Jessica asked blowing smoke in the old man’s eyes, who stopped struggling and hissed: “What do you want?” staring at each of them wild-eyed.

“Money, grandpa. Tell us where you keep the money and…” the girl replied, leaving the answer mid-air.

“Afterwards we’ll let you go.” Alfio added, pretending that it would be the end of that ugly story: they would go straight to Spider with their money, at full speed, hoping to get off scot-free.

Jessica turned her back on the old man and gave a forced smile full of disdain to Alfio, while Maicol sniggered trying to stifle a laugh.

“Christ,” thought the junkie: “What do they want to do with him?” A terrible idea came to his mind: “Maybe they want to kill him!”