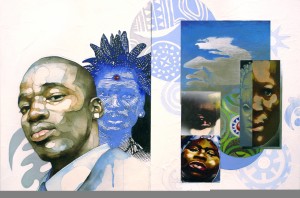 “After a deep examination of this current exhibition’s title, I’ve concluded that there is a central theme that has ran and is still running throughout my life and my artwork. This theme is the search for cultural identity. Growing up as a child in the 50’s which by the way was when I started painting in elementary school, my cultural identity was either taken from me or worst grossly distorted. This led to the development of an inferiority complex during that period of my life. Subsequently I am subconsciously drawn to the cultures to African and people of the African Diaspora. This drive is mainly manifested in my artwork. What is presently being exhibited is a good example of this.”

Emmy Award winning artist James Gayles attended Pratt Institute in New York, where he studied under renowned painters Jacob Lawrence and Audrey Flack. He simultaneously pursued careers in both fine and commercial art. As a commercial artist he established himself in New York as a Graphic Designer and Illustrator, becoming Assistant Director of Graphics at NewsCenter 4, NBC-TV. At NBC he won a television Emmy Award for design and illustration.

In New York he was a two-time winner of Art Direction Magazine’s Creativity Award, one for the NewsCenter 4 logo redesign, and the other for an editorial illustration for the New York Times. Here in the Bay Area he won the first place award for illustration at the California Newspaper Publishers’ Awards.

In addition to NBC and the New York Times, James has illustrated for McGraw-Hill, Random House, Essence Magazine, Black Enterprise Magazine, as well as several advertising agencies on both the East and West coast.

The Artist can be reached by email at jgayles66@hotmail.com.  You can visit his website at http://www.jamesgayles.com.

Read more about James’ life and artistic career by clicking on the ‘Read More’ link below.

James’ artwork has been represented by galleries throughout the US. Most recently he won a public art commission from the City of Oakland Craft and Cultural Arts Department, in which he transferred his figurative painting technique to ceramic tile murals. In 2003 he was honored at the Art of Living Black by receiving the Jan Hart-Shuyers Award.

He has been selected twice to show at the California Biennial Watercolor exhibit at the Triton Museum in Santa Clara. The City of Richmond purchased one of his paintings for their Civic Center Public Art Project. He has received the City of Oakland’s Individual Artist Grant in 2005 and 2007, and was recently commissioned by the Alameda County Art Commission and the City of Richmond to create a series of paintings.

Art critic and curator Adam Mikos had this to say about one of James’ most recent exhibition BluesMasters: “Gayles has focused his talents on fusing sight with sound, cajoling color and line to communicate like guitar strings and piano keys. Gayles clearly has a special touch with watercolors. Each portrait and image in the exhibition shows mastery over different styles of the medium. Dreamy realism, hard-edged contours, and abstraction push and pull on perspective. Gayles’ use of color is stunning. These are not the grainy, black and white images many think of as representing the blues. Bright reds, oranges, and blues catch the eye immediately and allow the lyrical quality of the watercolors to lift off the wall.”

James Gayles has lived in Oakland, CA for over 25 years and currently works as an Illustrator for the Bay Area Newspapers Group.

One thought on “Paintings by James Gayles”