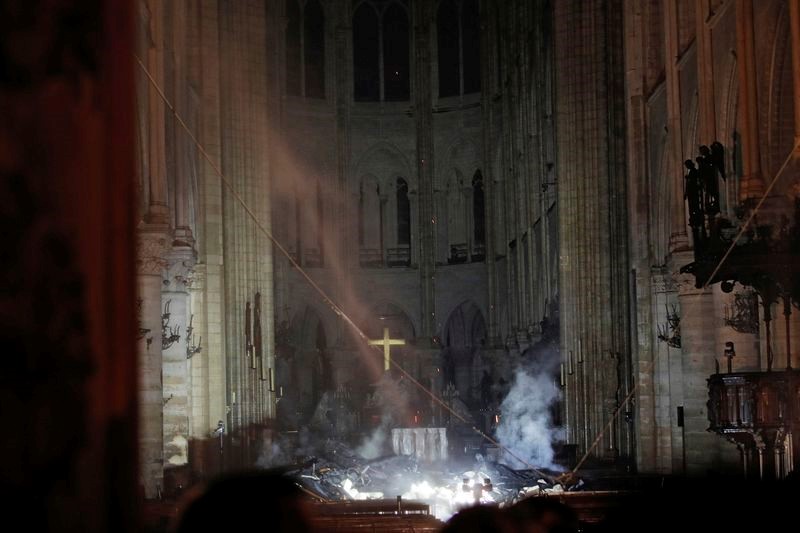 Interior of Notre-Dame de Paris after the fire of April 15, 2019

A Memory of Notre-Dame

I had been traveling for many hours from Philadelphia when I was seventeen on my first trip to Paris as part of a package tour for high schoolers I had worked much of the summer the year previous to afford.

It was spring and, despite the exhaustion and excitement after the long journey (my first by plane), when we got to the hotel near the Place Bastille, I decided there was no way I was going to sleep before in some way meeting Paris face to face. So I took my handful of francs and my high-school French, snuck out of the hotel (unknown to our chaperones), scurried down the local Metro stop, and took the first subway to the Île de la Cité.

After arriving at my destination without dropping off despite my first experience of jetlag, I wearily climbed endless levels of exit stairs into the late afternoon. And stood, rooted to the spot, staring almost straight up at the austere towers and the façade known to every schoolchild, and saying over and over to myself for a long, sleep-deprived moment: “Notre-Dame de Paris, Notre-Dame de Paris, this is Notre-Dame de Paris,” before dreamily crossing over to the front steps, and ascending them while taking curious, creak-necked glances up at the tympanum, and then walking gingerly (I wasn’t even sure, as a non-Catholic, I would even be allowed in) through the entrance way – surprisingly small – into the dark, unexpectedly cool interior.

As I entered, the organ burst into music. No services were going on that I could see, and I supposed the organist was rehearsing for Sunday. But it was one of those moments of mystery and magic in one’s life that seem to happen with some frequency in youth, and then less and less often with passing time. My fatigue and caution seemed to fall away. I walked into the cathedral and remember taking a very deep breath, then walked into the music and shadows.