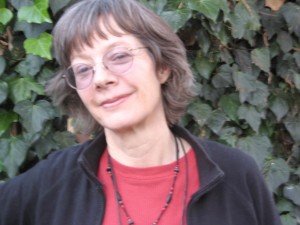 We go into the river knee-deep

then tread the rocks underneath

pulling ourselves along in the current

Two days ago I sat on a rock

icing my foot in the cold mountain water

having hurt my ankle going downhill.

You sat next to me

and kissed my ears, lips and neck

and observed the little water bugs

who had made shells out of the tiny rocks

I said, “They must secrete a saliva

that makes the sandy rocks stick”

rose and green and gray-blue and black and mahogany

encasing me in a kind of ready-made shell,

my feelers out and tingling, smelling the currents.

Now I look at the river reflecting the sun

and wonder whether or not to let you in,

my toes feeling the water’s edge

as I dry myself off with a towel.

I think of taking a picture of you

on the sandy spit – but I can’t

since the image of my old lover

the wide Montana sky opening up in a huge arc

reflecting off the river

reflecting off the you and me standing under it

and I cannot say or do anything

but pull away into my shell.

He lies with me

a descendant of the Aegean,

that on an ancient golden cup.

Son of the Minoans,

the hair on his chest and back

dark and curly and sensuous

except the one in my deepest heart.

He is a more than friend

we kiss and caress, our passions rising,

yet we turn apart:

he feels such love would be immoral,

with the one he loves

beyond friendship, beyond sensuality.

In the darkness he cries out,

he has had a nightmare:

he is lying naked and someone is poking him,

violating him with sticks.

I would love him but must leave him alone

despite the fact that I love his touch and kiss:

he drives me mad with pleasure,

he drives me mad with his fears,

Those eyes look at me so clear blue, gray, green

as if they were reflecting the ocean,

This is an adventure being with him

sharing this time and space,

our bodies holding each other

as if we were at sea while remaining apart

about to swim to separate destinations.

For now I take mental pictures

and explore the feel of the currents

and the taste of salt.

Note: Milfoil is another term used for the herb Yarrow, also known as Achillea Millefolium, or Soldier’s Wound Wort—referring to Achilles who reportedly staunched his and his soldiers’ wounds with it.

with your long johns,

slowly drifting towards yours,

you starting to rub

under all that cotton,

–our unsheathed bodies as innocent and sly

as sea pups in paradise.

Bio: Bea Garth is known for creating visually rich narrative poetry as well as for her unique figurative ceramic sculpture, drawing and painting. Early on Bea was influenced by her grandfather’s love of poetry as well as her great aunt’s love of  Asian art plus her parents’ early occupation as archaeologists. This has given Bea a real feel of living in a multicultural and multi-leveled world. She has been an extemporaneous poetry and arts organizer off and on for many years in the San Jose, California area after also organizing many such events and small press magazines in Eugene, Oregon. For the last few years she has been editing Eos: The Creative Context, an online progressive e-zine devoted to poetry, visual art and social, political and health commentary. She is now often found painting and writing in her new studio in her fiance’s garage and kept company by her three cats. She has previously had poems and artwork published in a variety of small press magazines including Alchemy, Poetic Space, Denali,Coyote’s Dance, The Other Paper, Writing For Our Lives, Caesura, Fresh Hot Bread, Sparring With Beatnik Ghosts and the poetry anthologies Elegant Stew and Women’s Dreams/Women’s Visions.

Her work can be found online at https://bgarthart.com/