**This is a review of an adult/erotica book. Review itself is PG-13 but the book mentioned is graphic, so make an informed choice about reading.** 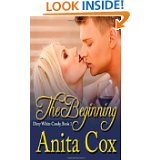 “The Beginning” is a short and spicy erotica novel whose title reveals a lot about the unfolding events. It begins, as many stories do, at the end of a horrible relationship, and Candy, the novel’s protagonist, is left like a deer in the headlights of life, from spending the whole of her adult life in a sheltered and uncompromising marriage. It is one that was doomed to fail, as her husband’s willingness to reciprocate any affection towards her seems to be as rare as a troupe of tap dancing unicorns. She is left frustrated and alone, rejected and lost…but wait! There is hope for this poor woman, in the form of a vivacious and well-meaning best friend-a friend who is willing to tell her the hard truth, which is that she is in need of some serious boundary-stretching…as well as a really good sex therapist.

It doesn’t take much coaxing on behalf of her friend, her therapist, and a few other key characters in the story to bring out the “naughty” (or is it just liberated?) woman that Candy has wanted to be all along. The sex scenes are done well, in a simple and direct style that doesn’t overpower the erotica with unnecessary flowery prose or Harlequin-romance-era romanticism. This story isn’t about romance, after all, but about freeing inhibitions, one giant step after another. In between the erotic adventures, Candy manages to achieve other small victories in her life. Her confidence increases, as does her openness with others. She learns to be more direct with her feelings, and to take control of a situation (like a co-worker taking advantage of her) rather than just accepting indignities as a part of the “way things are”. It also touches briefly on the potential complications of sexual explorations, such as jealousy from partners in open relationships, the fine line of coaxing versus coercion when exploring new territory with others, or the labels that people, especially other women, seem to put on themselves when it comes to their own sensuality. She wonders on one page if she’s been a “prude” as her friends insist she is, and yet in just a mere few pages later the word “whore” becomes a label she fears to be stuck with.

Since this book is the beginning of an ongoing series, I would like to see her in future novels eventually learn to come to terms with those labels and to find more security in who she is, despite the labels that others might try to pin on her. I’d also like to see more of an emotional intimacy gained with her new or current partners, perhaps sharing the kind of mindset she was in to carry on such a loveless marriage with her ex for so long, and why so much has changed since then. Since this book is just “The Beginning”, however, it’s a pretty good place to start. I’d recommend it to newcomers to erotica in general as well, since the scenes are pretty mild in comparison to some of the more hardcore novels out there.

This book will be available online, starting on 2/17/14 through Liquid Silver Books, at: http://www.lsbooks.com/