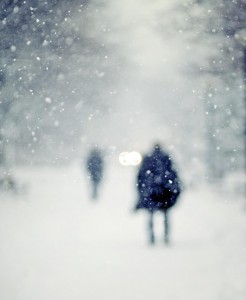 “It’s Christmas eve,” the burly motel owner said.
“Nobody’s got any rooms.” “Damn all,” said the man.
“It’s all right, Jay,” the wife, hardly a teen, replied,
looking at the owner. “Oh!” He, suddenly sheepish,
saw the problem: nine-months due,
the little body was swollen, a perfect sphere
at her tummy. “Well,” he added reluctantly,
“we’re not supposed to, but there is a corner
we sometimes rent in the garage. It’s not legal,
you know, so we have to charge more…” “More?
Man! For a garage?” sputtered the man.
“We get to sleep on cement?” “No, there’s a cot—
two cots, and blankets, a table, a utility sink,
and a ceiling light.” It was snowing outside.
Jay cursed. “We’ll take it,” he grumbled. “Come on, Myra.”
Myra exhaled. An hour later they were settled
in a cold room half hidden behind a row of cars
under a naked bulb. “If we weren’t black,”
said Jay, “he’d’ve let us sleep in the lobby,
the white bast—!” “Jay, don’t,” said Myra.
“We’ve got a roof for the night.” She heard the wind
blowing the snow down from Shasta’s peak.
“Be thankful, Jay.” “I’ll be
damned first,” he retorted. He pulled a cot
away from the wall. Myra lay very quiet on the other.
“You all right?” he asked. Myra had a scared look
on her face where she lay near the wall. She tried to
pull herself up. “Jay … Jay … oh … Jay ….
I think it … I think it’s …” “Holy shit … Not here, not now…!”

A clutch of teens were passing a joint behind Sal’s.
The snow was still falling, though lighter. “Hey man,
this stuff’s so strong, I can see Santa coming
over Redding.” “That’s no Santa, that’s a drone,
and he’s comin’ after yo’ tight ass.” The others giggled.
Suddenly someone appeared they didn’t know.
He wore a dark raincoat, which didn’t make much sense.
The boys stopped and stared. “It’s a narc,” one whispered.
“Or some transgender weirdo,” another sneered.
It had the figure of a man but a woman’s face,
it spoke softly but locked their eyes with its own:
each thought the figure looked at him alone.
“None of the above,” it smiled. The boys
were suddenly frightened. “Don’t be afraid. I have news.
Across the alley there’s something you should see.”
It pointed to a garage where a light was burning.
“Hey, it’s late, man. And it’s Christmas. I gotta get home.”
“I bring glad tidings. Go. Look. What have you to lose?”
He looked benignantly at them. “Peace to you.” Then he
seemed to disappear. They looked at each other.
“Man, that stuff is strong,” one of them said.
But they went anyway to the garage. A black man and woman
looked up from a little black baby in a towel and a blanket,
and lying in the sink. From a hole in the wall came a sound
of pigeons, their heads looking down. A stray dog
sat nearby, a cat was curled up on the table,
staring silently at the infant,
who lay watching the boys curiously,
in the unfocused way babies have;
seeming to be wondering where he was.
The boys, still high, fell to their knees.

Sometime after, there was a knock,
and three old men, one with a beard,
one with a funny hat, the third with his fingers
covered with shining rings, came in. “I told you
I was right,” said the one with the hat. “He’s the one.”
“How can you tell?” But the first was silent. The ringed
man nodded deeply to the mother. “Please excuse us.
We’ve come a long way to get here.” Myra smiled shyly,
fatigued from the labor, uncertain, yet taking
these strange happenings as they came. The man removed his rings
and placed them near the baby, their brightness
glimmering like his eyes. “Why are you ….?” she asked,
astonished. The man shook his head and smiled.
The two other men also left small offerings—
the most precious items, it seemed, that they possessed:
a vial of cheap perfume, a handful of costume jewelry.
“We cannot stay,” they said, then with a deep
bow to the child, they left. The man with the beard
said to the bewildered parents, “You do not know
who he is? It isn’t for me to say … But you
will know,” then departed.

“What are they
talking about?” said Jay. Myra wearily
shook her head, then took her newborn baby
who was at last beginning to cry, and opening her blouse,
let him feed greedily. Jay went outside—
the snow had stopped, the sky was deep, empty and clear—
and he looked up. The biggest star he had ever seen—
brighter than the moon on the brightest night of the year—
hung like a beacon, brilliant, straight and motionless, above him.

_____
Christopher Bernard is a novelist, poet, editor and journalist living in San Francisco. His books include the novel A Spy in the Ruins; a book of stories, In the American Night; and The Rose Shipwreck: Poems and Photographs. His novel Voyage to a Phantom City and a new collection of short fiction, Dangerous Stories for Boys, are scheduled for publication in 2015. He is co-editor of Caveat Lector (www.caveat-lector.org) and a regular contributor to Synchronized Chaos Magazine.