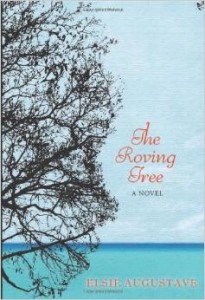 Elsie Augustave‘s novel The Roving Tree contrasts black and white cultures in several countries through a riveting story based on reality for many African Americans. It starts with a young girl’s struggle between two completely different worlds. Adopted at age 5 by a white family, Iris tries to reconcile her past as a poor, black child from Haiti, with her present. The story starts while she’s growing up in an affluent Anglo-American household in New York.

Her new family treats her with love and respect, but she soon faces taunts at school where many fellow students muttered when they saw her: “That nigger better not sit here” or “Go back to Africa.” After tossing out in shame her only photo of her birth mother, pinching her nose together with a clothespin to alter her Afro appearance and begging her American family for skin-lightening cream, Iris realizes that she can’t change who she is.

Despite rampant racial discrimination of the Sixties, Iris adjusts to her new life, excelling in school and in dance. In college, she accidentally meets her half-sister Pepe who also lives in the U.S. Both girls travel to Haiti when Iris’s mother dies in the same village where Pepe was raised. When Iris meets Pepe’s father, she finds out that he was also her own father, a wealthy Mulatto who had raped her mother while she worked as a maid for his family.

In Haiti, Iris reconnects with her relatives and experiences their culture, a mix of French and African tradition, Catholicism and voodoo magic of zombies and spirits. She sees discrimination among the natives based on the darkness of their skin, and she realizes that her mother had given her up for adoption to escape poverty and desperation to live a better life in America.

After graduating from college, Iris wants to return to her roots in Haiti, but decides to accept an offer to lead a dance troupe at the Institute of the Arts in Zaire, Africa. There she discovers the same rigid class structure, corruption, greed, poverty and illiteracy that marks her native Haiti. She confronts yet another culture shock – the practice of polygamy. Despite warnings of deprivation and despair for women in 1960s-Zaire, Iris’s friends there were unable to convince her to leave the place of her ethnic origins.

Her story astonishes readers when they realize that finding one’s heritage can compel someone to give up comfort, convenience and culture of the developing world to live in a country that offers much less. Iris’s story opens eyes to the deep yearning of all people to learn and appreciate their cultural backgrounds. The Roving Tree is a must-read for anyone who needs to understand and accept their fellow citizens who came here from the continent of Africa.