Welcome, readers, to December’s issue of Synchronized Chaos Magazine. This time we explore ideas related to loss and restoration.

How do we cope when something goes missing? Is it really different when we have lost a small object versus something larger, such as our personal or cultural identity, our sustenance, or the values through which we order and find meaning in life? How do we find what we seek, and what happens when we realize that what we need cannot be simply found and restored, but must be created from scratch?

Sarah Widdup gives us a tale of a mermaid who has lost her fins and ability to live under water, but returns to her ancestral ocean homeland for a time to bring a crucial personal item back to a shark.

Michael Robinson’s poem also looks into his past, describing the rough, violent, but diverse and vibrant neighborhood where he grew up. His piece compares the metaphorical prison of inner city poverty and the lack of safety and job opportunities, and his subsequent confinement in a mental hospital.

J.K. Durick’s poetry probes the lingering physical and mental after effects of war and murder and illustrates how violence can beget further destruction when it corrodes people’s psyches. He further shows how death, even natural death, is integrated inextricably with our daily lives, to where even our phone’s rings can be associated with someone’s passing.

Michael Marrotti invents a satirical tale of a poet who earns money and success through learning to craft crowd pleasing banalities. Jenny Santellano’s poems look into what it takes to be an authentic human being, with one’s thoughts and feelings superimposed on a background of everyday life and responsibilities, as well as vapid fake culture from those who have not yet probed the mysteries of life as deeply.

The tension between popular success, ordinary survival and true innovation is a common plague in the life of many artists. Although Marrotti’s speaker does not seem to suffer to the extent of Michael Robinson, even at the impoverished beginning of his career, he leaves readers wondering if there can be a middle ground where artists can feed themselves as well as our imaginations. After all, in Santellano’s piece Dante’s World, the home fires need tending, just as much as life’s meaning needs to be understood.

Donal Mahoney’s essay describes a community where people make efforts to carry each other through tough times. Even when they only have so much to eat themselves, they ‘add water to the beans’ to stretch their resources to accommodate whoever is struggling.

Christopher Bernard urges a return to community and to values such as caring and nurturance. His essay laments what he sees as a victory for aggression and toxic hypermasculinity in the United States presidential election and calls us to work to restoring social balance. In his poem Trumplandia, a takeoff on the Genesis creation story, he mocks the idea of a cultural ethic built on greed and vapid entertainment and materialism.

J.J. Campbell’s poetry illustrates how racial prejudice operates on a systemic and often subconscious level. J.D. DeHart presents images of power – law enforcement, strong people, childhood superheroes. Also, together with J.J. Campbell, he probes the boundaries between existence and nonexistence, and between having a strong sense of self or an identity crisis.

Vijay Nair laments what he sees as Nepal’s smallness and lack of distinction on a world scale and wishes for the nation to develop a stronger sense of identity.

M. Spear describes a tangible loss in his poetry, where he misses a past acquaintance. His work also searches out our origins, which Spear suggests may be an machine rather than the creator being of many religious traditions.

Rui Carvalho reviews a graphic novel where robotic beings experience emotional pain, loss and connection. He points out how the artwork and color scheme of the graphics helps to convey the story’s theme. A machine need not be purely impersonal or soulless.

Neil Ellman contributes another set of ekphrastic poetry, where his free verse accompanies modern art pieces, transliterating its colorful images into words. The Modernist era in Western art and thought involved much exploration of loss, grief, personal and national identity, mechanization, and finding meaning in a world lost and disconnected from its traditional sources.

Richard Slota’s historical novel Stray Son, as reviewed by Cristina Deptula, points to the value of identifying and separating one’s self from the unhealthy influences of one’s past. To properly grieve the losses of his parents and the happy family and childhood that he wished for his whole life, protagonist Patrick Yaworsky feels he must start by understanding why his parents abused him. That way he can externalize what happened as a product of his parents’ own troubled upbringing and time periods, rather than internalizing it as something that he deserved or brought on himself. This represents a healthy dissociation for him, and a way to free himself from the pain of past losses and restore health and stability to at least his own nuclear family.

Cristina Deptula also reviews Phyllis Grilikes’ Autism’s Stepchild, the story of the author’s friendship with a woman whose daughter has a condition which we would today recognize as autism. The book shares their journey towards understanding Jean and accepting her the way she is while helping her learn to communicate more effectively and encouraging her to develop her interests and talents. Also, she reviews Brett Matthew Axel’s children’s fairy tale Goblinheart, which shows the beauty of being free to live an authentic life within a community who accepts you.

And, finally, Joan Beebe shows us an image of life’s restoration in the form of a new baby.

We at Synchronized Chaos Magazine wish all of you health, nurturance, freedom, a stable sense of identity, and food for your table and your mind. And a very pleasant holiday season, as the solstice brings us from one end of the year to another, as Persephone revisits the underworld for another six months with its fabled pomegranates. 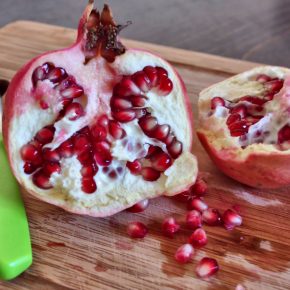