Welcome to a fresh year that hopefully brings a clean slate and invigorating creative possibilities to all of you in the reading audience. This month we take a cue from the dancers in Jess Curtis’ new show Gravity and examine what lies at the edges of our peripheral vision, and also what sits directly in front of us.

The dance show, performed at San Francisco’s Grand Theater, a space for conceptual and experimental art, drew upon audience reactions and interactions to shape the performance. Whether directly by invitation, or in ways the troupe revealed after certain segments, the performers relied upon viewer engagement and participation to determine the length and energy of their pieces. In one scene they intentionally sought to stay in viewers’ peripheral vision, raising questions about who we choose to see and how we decide to acknowledge their existence.

Returning poet Michael Robinson describes a love built on mutual understanding and kindness that begins with a first look, with his speaker and his partner meeting each other’s glance on a bus. Christopher Bernard, recurrent writer and critic, reviews a new volume from writer Eunice Odio, a poet determined to assert her physical and intellectual existence, to stay right front and center in their line of sight.

Former teacher Caleb Cheung’s talk on new directions in modern American science education, given at the Chabot Space and Science Center in Oakland, CA and reviewed by Cristina Deptula, begins with an audience-participation experiment simple enough for a child to carry out but more complex than it looks. Full understanding of the physical setup, which still eludes professional scientists, involves mathematical modeling and integration of different fields of science.

Jewelry artist Sebastian Lokason describes the reasoning behind how he runs his online store, going in depth into the process of turning a hobby inspired by his faith into a means of earning a living. As with the science demonstration, much more thought and planning has gone into fashioning and marketing his finely crafted pieces honoring Thor, Loki and other deities than would be apparent at first glance.

Returning essayist Ayokunle Adeleye encourages readers in his home country of Nigeria to look beyond their pre-conceived ideas about what constitutes a distinguished career and consider the need for and the value of classroom teaching as an occupation.

Ryan Hodge, in his Play/Write column, also goes beyond preconceived ideas about the roles of women and gives examples of female characters in video games that are neither weak and without agency nor merely replicas of the male characters. It’s possible to conceive of roles that are complementary and unique for these fictional women that go beyond the helpless ‘princess in need of rescue’ but also don’t take stereotypical maleness as a default, don’t assume that a female has to be masculine in order to be strong.

Joan Beebe writes of a snowfall on America’s East Coast, surprising the neighborhood with its peace and beauty. She also describes the nostalgia and fun of a New Year’s Eve celebration, capturing life in front of our eyes with grace. Poet Sada Malumfashi brings us lush wordy mixes celebrating the richness of poetic creation, youthful crushes, and imagination.

Returning poet Tony Glamortramp LeTigre humanizes characters many of us criticize, misunderstand, ignore, or keep on the periphery of our vision in his piece about several offbeat homeless men sharing a short-lived temporary home. In another piece he illustrates the fleeting, but intense moment of watching a loud, noisy train pass.

And Elizabeth Hughes thanks all the authors and the literary community for sending books and making her regular Book Periscope column possible.

We hope that January’s issue of Synchronized Chaos brings you the same thoughtful sensation of ecstasy as you savor these submissions. 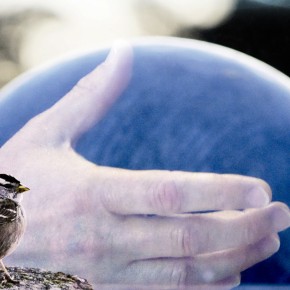