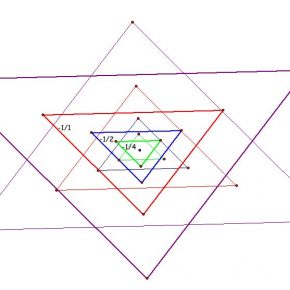 A scale factor reveals how much a map has been adjusted to depict a much larger or smaller reality. Are the places shown ten times bigger than they appear, or twenty times smaller?

This month’s Synchronized Chaos contributions explore life at different scales. Photos and poems focus in on fragments of the body or of physical objects, probe individual psychology, or discuss people in relationship to society, human history or the non-human natural world.

JD DeHart’s surrealist poem confronts death through the point of view of a detached nose, wondering about its fate apart from the whole body. Jim Zola’s photographs show fragmentation as an artistic experiment rather than a sign of dysfunction, riffing off of broken Christmas ornaments, tree bark and ladder steps.

Elizabeth Hughes reviews Jamel Gross’ Exit Lives in her Book Periscope column. This is a short horror novel built around the premise that even violent people can change when confronted with events they can no longer ignore.

Ryan Flanagan’s poems suggest that a degree of madness in human psychology and behavior may be as natural, although perhaps as disruptive, as an earthquake. He points to the absurd in our lives with readable humor, finally aimed outside our planet at the perennial controversy over the status of Pluto.

Allison Grayhurst starts with the individual and moves to a reflection on a person’s immediate social world – family, friends and local community. While interactions on this scale may seem less grandiose and relevant on a large scale, this is the sphere of experience that most directly shapes our lives.

Mahbub’s poetry highlights the intensity of our emotional response to our micro-environments. Romantic love, friendly affection, and personal religious faith carry physical weight and bring about a bodily response. Joan Beebe acknowledges individual self-awareness and consciousness and suggests that rather than just staying in a place of self-reflection, we can suppose that others have similar self-aware thoughts and thus feel a connection to others on a larger scale. She also points to a more personal religious faith, where God has a purpose for a small church mouse and can look after her pilot nephew.

Todd Wiggins contributes a profile of his son R.J., who is a skilled communicator and linguist at a very young age. While supported and encouraged by those around him, he’s on his own path, not determined by his age, his past or his environment.

Joe Schueler’s poetic subject seems excluded from his social world, and responds by actively breaking into someone’s life and psyche.

Rui Carvalho reviews a Japanese film, Delices de Tokyo, that focuses in on small communities: a dessert shop with a few distinctive characters, and a leprosarium where the patients find life together while in the process of dying. The film’s cinematography and rich color highlights the vibrancy of individual lives and relationships.

Akinmade Zeal moves from personal relationships to critique of the broader society. He calls out for the leaders and citizens of his native Nigeria to become more ethical and less corrupt and self-serving and to build a society driven more by thought and understanding and less by power and class privilege. In an interview with myself, Zeal points out how he and other Nigerian writers are driven to put pen to paper by their social consciences.

Vijay Nair lambasts the sitting U.S. president, comparing him in verse to a mouse who, although small, can destroy much larger beings by infecting them with plague. Like Zeal, he expresses direct, unambiguous critical sentiments through aesthetic poetic form.

LeTigre also contributes a poem showing how nature re-enters our civilized lives in a gentle, but determined way. This poem brings to mind Carl Sandburg’s fog, which enters on little cat feet.

Michael Robinson reminds us of the restorative psychological effects of nature, as forests and sunlight can expand our perspectives when we feel trapped in toxic human-made situations.

Vandita Dharni offers up elegant verse on romantic love and nature’s beauty, reminiscent of the aesthetics of Wordsworth and Elizabeth and Robert Browning.

Theophilus Adeyinka presents a contrasting perspective on nature, as his speakers labor to survive and produce food on dry, rough land. Living in the natural environment is a constant struggle, but also a dignified, worthwhile pursuit worthy of celebration in verse.

As the closing keynote speaker pointed out, though, there can be psychological and social implications of how we understand and interpret what we see in the natural world. As Dr. Charis Thompson (of UC Berkeley and the London School of Economics) illustrated, a scientific and physical focus on the individual can be counterbalanced by a simultaneous social focus on social inclusion. This involves making sure individuals from different backgrounds are taken into account in medical research and policy and striving to extend this type of personalized care to more people.

As Joan Beebe also shows in her poem “Universal Oneness,” examining individual experience and acknowledging its uniqueness does not have to preclude understanding of and empathy for a broader community. We all share the experience of being unique in some particular way. The scales at which we understand our existence are not mutually exclusive, as understanding oneself can help us build bridges towards relating to the larger world.