Many pieces illustrate ways in which we understand and interpret our world, as our writers grapple with huge questions: how to empower the poor, how to find happiness, how to understand and prevent violence and repression, how to heal from trauma.

Elizabeth Hughes begins by giving us succinct descriptions of the books she reviews in her monthly Book Periscope column, capturing the atmosphere and style of each title. A ‘gut feeling’ initial reaction usually comes first as we make sense of something, and while this often changes or gets refined, it is crucial because it gives us somewhere to start. This month, her surveyed titles include Joe Writeson’s expatriate memoir From Jarrow to Java (on a beer scooter) and Aaron Cohen’s crime and suspense thriller Luke.

Other submissions deal with later stages of analysis. Poet Shelby Stephenson traces the role of firearms in American society through a long tone poem, “Forthwith – Lament: To Attempt a Meditation on Guns.” He wonders in writing how we went from an era where adults and children freely carried weapons for hunting and target practice to a nation where guns are banned from many public places, and people fear random violence at schools and theaters.

Many cultural artifacts can be used for multiple positive and negative purposes, like multi-layered symbols within a novel. And Stephenson takes a single object, a firearm, and uses it as a lens to track and ponder changing societal attitudes.

Christopher Bernard also focuses in on a particular civic function in his poem “The Taxpayer.” He connects the individual action of paying taxes with the broader effects of what that money finances around the world, illustrating the unavoidable connection in the modern world between the global and the local. When one already participates financially in international events, it becomes impossible to disengage from issues at that level. Also, when ordinary people participate in a systemic effort to accomplish something, even without their choice or full understanding, they can become less likely to critically examine their leaders’ goals and objectives. People want to believe they have been contributing to good, rather than ill, and may not then seek out information shining light on the inefficacy or wrongdoing in which they have played a part. So, by blatantly laying out the broader effects of individual actions, Bernard drives his point home, breaking through our mental blocks.

Poet George Sparling also deals with sociopolitical issues, evoking a state of paranoia in his piece. It is difficult to tell whether his protagonist is a victim of state repression or dealing with personal mental illness. By blurring the line between insanity and external oppression, the poet illustrates the mental toll of constant fear, psychological manipulation and invasion of privacy. Like Elizabeth Hughes, he identifies and describes a particular tone and sensibility, and then goes farther to create that feeling within his piece.

Creating a tutorial, or a guide to something, represents another way to digest it, breaking it down bit by bit into understandable steps. A teacher must master not only the material but also the learning process, how to explain and systematize material. Management professor and mammalian sociologist Dr. Loretta Breuning, journalist Janna Leyde, and fashion writer Mimi Sylte all deal with teaching and learning in their pieces.

Dr. Breuning presents a guide to natural mood management, identifying and describing the function of each of our brain’s ‘happy chemical’ neurotransmitters, chemicals that affect how we feel that are released in response to perceived situations. She provides a how-to manual for the mammalian brain, summarizing some of the information in her recent book, Meet Your Happy Chemicals.

Fashion student and upcoming designer Mimi Sylte interviews Sam Formo, leader and coach of Developing Skills through Independence, Networking and Empowerment (D-SINE). This is a San Francisco nonprofit designed to teach design, apparel construction and pattern-making to low-income, struggling people so they can create and sell their own clothing lines. Formo and Sylte converse about Formo’s own work in developing eco-friendly apparel, then move on to discuss education as a means to expand confidence and life options.

Journalist and yoga instructor Janna Leyde describes her middle-aged father’s work with a physical therapist, relearning how to walk, eat, speak and write after suffering a total brain injury. Her piece teeters between fascination, compassion and frustration, emotions many caregivers can share. The fact that she chose a section about teaching, out of a full-length memoir, He Never Liked Cake, to send our way, highlights the intensity of her family’s challenge: figuring out how to be a person, learning how to function and coexist with others, is hard work.

Most of our contributors don’t experience such a dramatic struggle as Janna’s father, but they, along with the rest of us, become new, larger people as we assimilate information and reinterpret our world.

Writer and critic Tapati McDaniels provides a detailed review of comedian Kamau Bell’s recent San Francisco performance of his new show Totally Biased, deconstructing and analyzing the logistics and setup of the event as well as the words that were spoken. According to professor Marshall McLuhan, the medium is an unavoidable part of the message, reflecting and expressing content along with the official presentation. So, as we see, the order in which people performed, where everyone sat on stage, and the schedule of the night contributed to the event’s ability to address and comment on race relations and showcase local talent.

Wendy Saddler processes big issues in her review of Dean Hartwell’s atheist manifesto, St. Peter’s Choice. She analyzes the author’s overall worldview as well as the specific claims he makes in this book, where he outlines why he decided not to believe in traditional Christianity. Understanding and hearing others does not require that we come to agree with them, only that we comprehend what they are saying and envision ourselves in their place. And a reasoned disagreement can promote thought and deeper analysis of the matters at hand, leading to a superior synthesis of ideas, if there is one to be achieved.

Our final contributor, Lorene Miller presents finished products of digestion, perfectly honed crystals of thought and feeling. Miller creates an individual portrait of an unusual character, describing her specifically and lovingly, down to her hair, her vegetarianism, and love for birds. Miller brings us back to the beauty of language and thought, to what we can find when we do the tough work of making sense of our universe. That, along with the practical need to understand and get along with others, and to communicate, inspires us to engage with our cultural ideas and personal experiences at a deeper level.

We at Synchronized Chaos Magazine invite you to accompany us on a journey of thought, sharing in these ideas during the change of seasons. 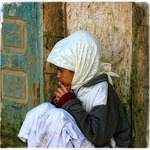