These images are not manipulated in any way.  They are straight from nature to camera to print.

These are portraits of the spirits that live at the interface of this world and another.

Portraits of the Earth Goddess

These are reflections of our own dualistic psyche, reflecting our good side and a side that is not so good.

When you change your point of view you see things differently.

This photographic passion began when I awoke one morning facing an alpine lake in Banff, BC.

The face of Mother Nature I saw beckoned for her portrait.   She doesn’t stay around long enough to pose.  Her fleeting moments will never be seen again.

I can’t say these faces talk to me but I sure talk to them.  I say hello, then thank them for coming to my photographic session.

My body of work consists of:

Every time you look at these you’ll see something different.

These, and many more, can be seen at:    www.heinzight.com

More blurbs from the editor…

During this worldwide event, people who choose to participate can order fair-trade chocolate from Global Exchange’s website.

Then, for Reverse Trick-Or-Treating, people dress in costume, go house to house, and give out the chocolate, along with information about fair trade practices. (In the United States, children typically ask for candies at each house.) Moravia was Waldo from the children’s book Where’s Waldo, and I dressed as Theano, wife of the Greek philosopher and mathematician Pythagoras.

Berkeley gave birth to many social-justice, international-awareness, and ecological movements over the years, and most homes high up in the hills already knew of and bought fair trade products when possible. Still, most accepted our chocolates, and even gave us candy anyway! (Most trick-or-treaters are very young, elementary school age or younger.)

Global Exchange remains in business with their justice-oriented corporate philosophy, and, although orders and revenue have declined, withstood the past year and a half of global recession.

Their chocolate and other products are all purchased from suppliers which they know strive to pay the farm families who grew the plants a wage on which they can live. Also, cacao, tea, and coffee growers have joined together in Global Exchange-facilitated cooperatives to pool capital for longer-term investments – medical clinics, schools, ecologically workable technologies to increase crop yield.

A fellow organist and audience member gestured towards the giant Wurlitzer regularly showcased in concert at the Berkeley Community Theater.

Once providing grandiose piped sound for churches and movie theaters across the United States, organs are now relegated to special events and formal weddings and funerals.

“Making music with air and pipes goes way back in history, at least to the ancient Greeks,” said Gordon Pratt, organ player of many years.

Over time, technology advanced so that organs became more elaborate, with larger instruments containing five levels of keys, and entire arrays of tabs and pedals for further sound variety. One may select the exact type of sound one needs by setting tabs for each pipe in particular ways before one begins playing, and sustain a note by pressing foot pedals.

Asked how an organ player could move his or hands up and down quickly enough to keep up with a musical piece, Pratt and others explained that one became better with practice.

“A piano has a long horizontal set of keys, and classical pianists learn to move their fingers where they need to go, so organists can do the same.”

Church organs are physically different from many instruments intended for old-time movie theaters. A theater organ can produce more vibrato for horror-style sound effects, while a church organ typically plays more melodious hymns. The Berkeley Theater’s Wurlitzer is capable of playing both styles of music, pulling off Mendelssohn’s Wedding March and music from the Phantom of the Opera with ease.

An older crowd attended the organ performance, many of whom remembered playing the instrument themselves at church or in high school. Volunteers sold organ music on vinyl records or cassette tapes. Yet not all the music played, either on the Wurlitzer or the accompanying piano, was nostalgic. We were also treated to the theme from Jurassic Park and a dramatic, complex rendering of the theme from the Man from Snowy River in addition to the classical pieces and old Broadway showtunes.

Many types of modern and traditional music can be performed on an organ – and the Berkeley Community Theater’s regular, monthly first-Sunday concerts invite the public to enjoy the art form.

More information on the Berkeley Community Theater and the organ’s workings and constructions here: http://www.atos.org/Pages/Journal/Berkeley/berkeley.html

First-timers are free for the relatively inexpensive concerts!

View of Manhattan from Brooklyn

Stephen Williams grew up in Oregon where he studied photography and watercolor. After moving to San Francisco in the late 80s, he has found himself obsessed with making art, acrylic paintings especially, out of his apartment. For over ten years he’s watched his inventory grow as he participated in the occasional private sale and fundraising benefit at galleries such as the Lab. Now he is ready to bring his art to the public.

Inspired by illustrations in comic books, photography and dioramas, his use of saturated color and crisp detail matched with intense atmospheric light create moody, nostalgic images. Aiming for ‘naturalistic artifice,’ he uses his figures, costumes, props and settings to explore effects of form and space, identity and performance. The world he creates is a gauzy realm where dreams and memory collide.

He may be reached at stefanowilliams@sbcglobal.net 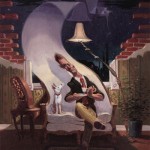 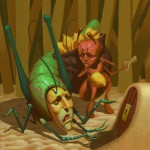 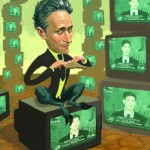 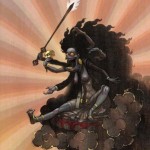 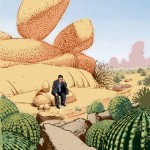 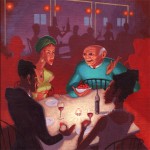 Illustration is the task to create visual content in close association with another publication or product in order to provide greater identification with the intended audience. This is possible since bonded with the painted layers of any good illustration can exist compelling insight into truth.  As an illustrator I find this to be one satisfying way to pass on a meaningful narrative and bring significance to living. Though my works are fantastical, futuristic, abstract, or absurdist parody, they all represent attempts to allegorize some truth underlying their nature, or they would blow away, having no foundation.

Spencer may be reached at spencerhallam@gmail.com

Ashley Boettcher’s Threshold represents an ambitious undertaking for a first time novelist. The book weaves together an alternate American military and political history with a secret-agent mystery tale involving a threatened presidential assassination. Also, she provides a gently humorous slice of teen and family social life, interspersed with a mystical element complete with real-life Sirens and ancient evils gowned witches hide away from otherworldly flames.

Even with the fate of the civilized world at stake, Boettcher’s characters fight to avoid detentions, develop crushes on each other, and resent that their little kid brothers get assigned the most exciting parts of the investigation. Boettcher’s observant eye for the idealism and insecurity of the teenage psyche allows her to create coherent main characters and scenes which drive the story forward. Meanwhile, the beauty of the otherworldly, magical scenes take the narrative outside of its high-school confines, connecting the tale to larger spiritual and moral dramas.

The best mystery novels allow readers to piece together clues along with fictional investigators, solving the puzzle right before the character makes his or her final ‘Aha!’ pronouncement. Threshold considers itself a mystery, as the novel jumps among plot threads and freezes its characters at precise moments of suspense. Especially in the first half, however, readers are still working out the alternate history and likely will not catch the significance of certain clues. The effective pacing and authentic rhythm and dialogue of the piece works well for a suspense thriller. And the entire piece could be strengthened by ‘setting the stage’ beforehand through a prologue or some telling details, so readers may focus on the unfolding drama of the killer’s stalking the President and the detectives without attempting to grasp two mysteries at once.

Also, some of the novel’s plot points, while imaginative, seem fantastical. And not the ones involving Sirens, exorcism, prophecies and science-fiction cloning/eugenics from the secretive Society. Those actually create a supernatural mood of mystical horror where arguing over the feasibility of details becomes less necessary. And the notes from the assassin, slightly tedious at the beginning while completely inexplicable, foreshadow a chilling, Hamlet-like exploration of obsession and post-traumatic stress syndrome and the healing role of faith.

Some of the real-life, modern-day scenes feel not quite real: two teens unearthing the President’s family secrets ‘on the Internet,’ the young detectives’ hiding in a trunk and surviving a car bomb, the eventual escape of the ‘copycat’ killer with a pen. Threshold could be strengthened by ensuring the technical feasibility of the ‘real-life’ scenes through researching and then subtly weaving details into the narrative to convey that knowledge.

Threshold presents a stark contrast between good and evil, life and death, love and terror. Perhaps this is the novel’s greatest strength – we see life in all its confusing glory, humanity in all its manifestations, posited as the antithesis to a one-dimensional secret society obsessed with power and death.

Hopefully Boettcher will continue writing, playing to her strengths with the help of qualified editors.

n  Ashley Boettcher’s Threshold is an upcoming novel, available in present form directly from the author – who may be reached at Ashley.boettcher@gmail.com.

Each set of color evokes slightly different feelings in many viewers, and Demb has created a personal gallery where the multiple renderings of the similar images hang next to and flow into one another. No one knows exactly how the ‘end of the world’ or the future will look, and the variety calls attention to the idealized, conceptual images which appear for every color scheme while drawing viewers in through the visual brilliance.

Recently I had the privilege of visiting her home artist studio, and we discussed her creative process over Beethoven sonatas and warm tea. For Demb, pencil drawing is one current manifestation of a lifelong creative journey and a means to explore personal questions of faith and destiny.

Lisa Demb welcomes comments, questions, requests, and any feedback regarding her artwork. She also produces custom-designed stationery, which you may order directly from her. You may write to Ms. Demb at 140 Jones Street, San Francisco, CA 94102 or call 415-776-2115 and ask for her by name.