Beyond the bright lights and champagne toasts of the Kentucky Derby and other big time horse racing events are smaller, dingier, less attended, and seemingly more dangerous races known as claiming races. These are the races that populate Jaimy Gordon’s novel Lord of Misrule.

Claiming races are those where the horses are up for sale until shortly before the race. Title to the horse transfers just before the start of the race, but the previous owner is entitled to any purse that results from the horse’s performance. Within each race the horses are priced similarly, in theory preventing a higher class equine from easily beating the field. Its owner would, presumably, not want it to be sold for less than its value.

Into this world Gordon inserts a host of characters, heroic and unsavory. They are hard lived or hard working, and sometimes both. Lowlifes, miscreants, and outright criminals make trouble in and around Indian Mound Downs in West Virginia, a horse track where owners seem to go when they have nowhere else to race.

Tommy and Maggie arrive at Indian Mound hoping for a quick and easy score. The track denizens—the groom, blacksmith, an old gypsy lady, and others—get caught up in the act as Tommy tries to beat the system and Maggie bides her time until she can get on with her life on her own terms. Little does she realize how attached she will become to the horses.

Matt Baxter is a freelance writer who contributes regularly to Silicon Valley community newspapers. Baxter may be reached at mattbaxter@columnist.com. Read more at mattbaxx.blogspot.com.

END_OF_DOCUMENT_TOKEN_TO_BE_REPLACED

Synchronized Chaos Magazine encourages you to donate to relief efforts happening now in Japan. As we all know by now, Japan was hit by an enormous earthquake and tsunami on March 11, 2011. The death toll is still rising. For those who have survived, they struggle to have their basic needs met.

Please visit the following Websites to see how you can help:

You may also text REDCROSS to 90999 to make a $10 donation to Japan relief through the Red Cross, which will appear on your next cell phone bill.

The March issue of Synchronized Chaos, Adaptation and Concentration, is fully-loaded with poetry and commentary. Many thanks to our book and poetry reviewers this month: Bruce and Kathy Roberts, Tammra Smith, Christopher Williams, and J’Rie B. Elliott. Bruce Roberts also give us his critique on Beach Blanket Babylon, a musical/comedy based in San Francisco, CA. Poetry contributors are Andrew Rahal, Simon J. Charlton, Michael Swain, and Faracy Grouse.

Last, but not least…folks in the San Francisco Bay Area: Thank you for continuously supporting communities that are often underexposed in the arts! On Friday, March 11, 2011, Cukui Clothing Company in Japantown, San Jose, will host a solo art exhibit by Steve Caballero. Caballero is an emerging artist (and a local legend to many in the skateboarding world).

Brenton Bostwick was raised in the San Francisco Bay Area where he currently lives and works. He has studied sculpture and painting at New York University and the San Francisco Art Institute. From a young age he was drawn to the human form, studying portraiture as well as human and animal anatomy as sources of inspiration for his paintings.

Bostwick was also greatly influenced by his travels abroad. He was intrigued and deeply moved by the masterworks of the old world painters and sculptors. It was on one of these trips that he visited the Sedlec Ossuary which created a lasting, and iconic visual experience for him. The Ossuary in Sedlec, also known as the Church of All Saints, is a 13th century chapel just outside of Prague. The chapel is heavily decorated with human bones. He was in awe that the skeletons of over 30,000 people, their deaths brought on by the bubonic plague, could be transformed in to something so beautiful. The contrast between the absolute beauty and mastery of the work there, with the dark nature of the medium struck a chord.

To see more artwork by Brenton Bostwick, visit his website at http://brentonbostwickart.com/index.html

To contact the artist, send an email to brenton.bostwick@gmail.com

END_OF_DOCUMENT_TOKEN_TO_BE_REPLACED 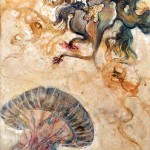 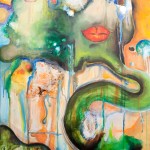 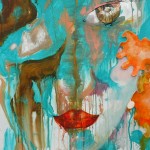 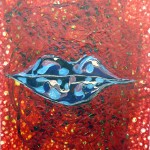 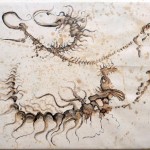 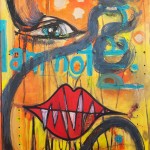 Ytaelena Lopez is a poet and artist who currently lives in San Francisco, CA, although she is originally from Venezuela. Lopez prefers to work in mixed media. Her work has been exhibited in Miami (85@85: 3rd annual International Juried Exhibition 2008- 2009 at MiArte Gallery), Los Angeles (Seyhoun Gallery), New York (Lana Santorelli Gallery), and Chile (Galería Locarno in Talca, 2008). She has also exhibited her work in several venues throughout the San Francisco Bay Area.

You can see more of the artist’s work at http://ytaelena.com.

END_OF_DOCUMENT_TOKEN_TO_BE_REPLACED

the kind which is polished of most of its sharp edges,
is warm but never burns the tongue

the kind of love which sleeps in late on Saturday mornings snuggled under 1000 thread count sheets,

This love doesn’t lend itself well to sweeping semantics
It’s too quiet and sophisticated for that,

Gone from it are the teenage dramatics
Empty threats, idle dreams and false needs,

I want to write you a love poem,
from a very grown up woman
who has completely grown into her own skin,
but here I am still fidgeting and pulling at my sleeves

So here is this,
from someone at that strange fevered edge of youth,
sea legs accustomed to violent waves
hobbling about on smooth seas
not yet believing that the likelihood of drowning
has been forever decreased.

Faracy Grouse may be reached for comment at alumine3@gmail.com.
END_OF_DOCUMENT_TOKEN_TO_BE_REPLACED

When Tony Bennett croons about leaving his heart in San Francisco, tourists the world over call up fond memories of the Golden Gate Bridge, Cable Cars, Fishermans’ Wharf, Alcatraz-the world class sights and sites of “The City.”

Still, for me, frosting on the cake of a visit to San Francisco means tickets to Beach Blanket Babylon. Performed in the funky Club Fugazi, in mellow Italian North Beach, BBB is a raucus, rowdy, sometimes raunchy, foot-stomping, hand-clapping, LOL musical satire, that has entertained audiences in over 8000 performances since 1974. It is the longest live run in theater history, and what other show has its own street name:  Beach Blanket Babylon Boulevard?

BBB has something for everyone.   Loosely structured around Snow White, searching the world for her Prince, the show’s performers pull in every  name in the news, every classic song, all with their own unique San Francisco interpretation.

Some of their bits have been in for years, and younger audiences may wonder at the allusions.   How many years since Man O Manischevitz has been a well-known ad, for example?

Yet every year, many of the skits are also new.  The World Series Champion SF Giants made their first appearance this year.  And the one-upmanship war between an ersatz Lady Gaga and her fake Katie Perry counterpart drew its first laughs in 2011, then hyped the audience to hysteria when the cast version of Justin Bieber-shy, naïve, inexperienced-came out, and was immediately rubbed up against by the two femme fatales, promising to be the best he’s ever had.

Bruce Roberts may be reached at brobe60491@sbcglobal.net.