Welcome readers to May’s issue of Synchronized Chaos Magazine! According to Google’s dictionary, a concoction is a mixture of various ingredients. The term can also refer to a story, sometimes a lie but also just an elaborate invention, a combination of story elements and literary devices.

This month’s contributors bring us a phonetic concoction, a crafty and touching mix of words and thoughts where how things are said and told matters as much as the content.

This issue contains a great deal of poetry. David Newell calls attention to the power of words to evoke patriotic emotions and to call our minds to attention, even in our sleep. He also makes wry observations on the ubiquity and universality of death. Jacob Holtgraewe’s work reminds us that our relationships and even our own sense of who we are is less permanent than we would like to believe. K.C. Fontaine echoes this idea, showing a change of heart and mind through physical poetic metaphor as his speaker goes from admiring to fully embracing a new set of values. Nathanial Caudel examines the role of religion in our lives, critiquing how hypocrisy and selfishness have overtaken institutions meant to provide comfort and encourage compassion.

Christopher Bernard illustrates the power of one person to ignite historic change – even catastrophic, accidental, seemingly random change, even as great thinkers doubt their capacity. Cristina Deptula also reviews a talk at Oakland, California’s Chabot Space and Science Center from UC Berkeley’s Seismological Center’s Dr. Peggy Hellweg on new and improved methods for earthquake warnings and on why seismologists believe a major quake may hit the state soon. The natural world, as Dr. Hellweg and Christopher Bernard point out, is still wild and unpredictable. But through our efforts we can have an influence and take steps towards gaining understanding.

In her monthly Book Periscope review column, Elizabeth Hughes comments on novels that use suspense, humor, metaphor and other literary techniques to tell stories of war and rebellion, murder and corruption, adventure and rescue, and loving friendships and family relationships. The craft of writing becomes as integral to the story as the plot in Amanda Clay’s Rebel Song, Dale Wiley’s The Intern, Louis Piechota’s A Rose in the Desert and Tracy Ploch’s The Shoebox and enriches these books, making them stand out in their genres.

Laurie Kolp presents an independent female protagonist determined that she will travel the world and will not be treated as a pretty plaything or objectified for someone else’s comfort. Kolp’s other writing evokes the beauty of a listening ear and of martial arts well practiced.

Mei Du gives us a lullaby embracing the sounds of the outside world rather than shutting them out in order to rest. Yuxing Xia also presents ‘found objects’, in this case words from Apple’s robotic personal assistant component of its operating system Siri, as poetry. They may not make literal sense but there is a feeling and rhythm to what’s said.

Elle Pryor harnesses anapaestic meter and formal poetic style to create scenes with drug addicts, rowdy soccer fans and prostitutes, and in so doing suggests that her rough subjects are part of human life and not something to shrink from or treat in strictly a clinical way. Andrea Carr writes of love and loss in a traditional Old English poetic style, using meter and language from that period as a vehicle for her speakers’ emotion. She celebrates the beauty of the language and illustrates the power of strong feeling to transcend time and connect with modern people even through the language of days past. Joan Beebe uses simple, elegant language and rhythm to convey the comfort and beauty of friendships, music, a full life with all our human feelings, and days from her childhood in libraries, on the farm and in her family’s old boarding house. Her work becomes a kind of plainsong, speaking of the dignity and gentleness of America’s past.

Michael Robinson creates prose poetry sketches of a boy’s inner city foster family, as they celebrate the joy and heritage of Motown music and bear the scars of disease, exhaustion and the after effects of the Vietnam War on body and soul. Doug Hawley also looks to family relationships for inspiration in his short story where a grown man finds his long-lost father and the extended families reconnect. In Hawley’s optimistic piece, many, but not all, rifts are overcome. Ryan Hodge, in his monthly Play/Write column on what video games teach us about crafting stories, focuses on relationships in a different context. This month we observe from Stargate, Red Dawn and other science fiction classics the importance of developing mutually enriching friendships while learning and taking on challenges appropriate for one’s skill level.

Howie Good brings us the substance and feeling of nightmares, various extreme situations that all end in disaster, and also an instruction for the writing process: hurry towards the end of what we have to say, don’t stop for premature editing or cleaning things up, and one might arrive in time to see our subconscious angels put the piece together by the faint light of imagination.

Andrea Carr personifies her speaker’s emotions and then talks to and about them, explaining and defending their presence. She also contributes an essay describing her writing process, how and why she writes and how she finds connection with others through sharing work.

Merrell Miles uses a more lighthearted approach to comment on the procrastination that plagues many creative artists’ lives. He wishes that we could tackle all of our life issues in one burst of effort when we get to them, as we can sometimes with the dishes, depending on our standards of hygiene. His other pieces touch on self doubt, dissatisfaction and those moments when our lives do not measure up to our ideal self-image. Perhaps he and Howie Good consider desperate urgency to create, and fear of that act of creation, part of the life of the artist.

Jaime Mathis sketches out a vignette on the end of a codependent relationship, where two fragile people are drawn to each other out of psychological need. His nonfiction piece illustrates how a visit to New Zealand, where he learned of the history of the native peoples and their connection to the land, caused him to seek a similar connection in his own hometown of Portland, Oregon. Rather than leaving modern society to chase native wisdom in a foreign land, he brings the lessons home to his own life and family.

Lewis Humphries writes of passions denied and expressed illicitly: young apprentices waiting for independence and the ability to craft their own dreams, adulterous lovers who seek and find each other.

We hope that reading this issue will be a passion in which you proudly indulge, and that you consider leaving feedback for the many writers included within this month’s work. 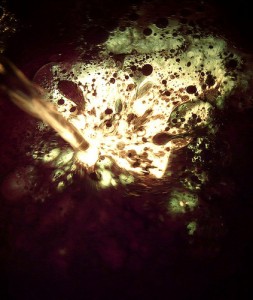 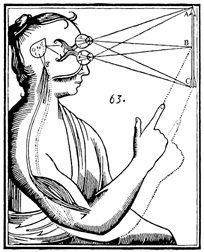 He woke in the middle of a nightmare.

The terror lay in his room

covered with flies. Its teeth

shone in the grass.

half-asleep above the stove of a peasant,

turned, restless with insomnia from his problem:

“What can I know, if anything?”

He knew he could doubt; besides that,

could he know anything at all?

A man raised a tube in Italy

with curious lenses toward the night.

The moon bowed its face toward him.

“What will I see there, if anything?”

To his eye he put the tube and squinted.

“Cara luna, will I see anything at all?”

a work of indisputable logic

through the night. He raised his eyes, reflected:

In the darkness he heard someone whisper:

“What if he can do anything at all?”

A gentleman in Paris totted up figures

in two columns on a smooth surface of calf-skin:

“What can I make, if anything?”

He counted again: the numbers added up, beautifully.

His fingers grasped the quill so hard it split.

It was nearing midnight in Europe.

A messenger was crossing the mountains,

taking an urgent notice between sovereigns

who had never met face to face.

As he neared the summit, he stumbled,

his boot dislodging a stone

that fell, gathering stones as it went

in a wind of rocks, trees, snow,

collapsing across the valley

in an avalanche, burying it all.

Christopher Bernard is a poet and writer living in San Francisco. He is coeditor of the literary and arts webzine Caveat Lector. His poetry can be read at The Bog of St. Philinte.

Image from The BioLogos Forum.

What RPGs Teach Us About Creating an Ensemble

Most kids in my generation grew up watching shows like Power Rangers, Teenage Mutant Ninja Turtles, Voltron, and other dynamic action shows featuring an ensemble cast. Which of these personas we adopted on the playground could actually be viewed as a partial reflection of what qualities we valued. Kids who wanted to play as Leonardo tended to want to be leaders, Raphaels were more inclined to just fight, Michelangelos had a penchant for silliness, and Donatellos… were the fourth one. 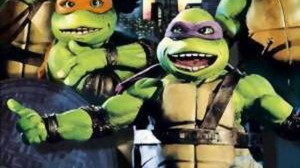 Now a group of people coming together to solve a problem is nothing new, narrative, of course; but there seems to be something in particular that is compelling about these particular kinds of shows –especially with the younger crowd.

What’s very interesting about these stories is their inclusiveness. It’s predicated on the notion that neither one individual nor skill set is sufficient to solve the problem. You could be the greatest warrior to have ever lived, but if your mechanic can’t maintain your equipment; then there’s only so much a naked warrior can do against a tank.

END_OF_DOCUMENT_TOKEN_TO_BE_REPLACED

SOMEWHERE OVER THE RAINBOW

Some might not notice at all
dazzled by rainbow light –

infinitely fading into something else –
over the rainbow

While you slept
I was in the air, in the atmosphere
many times

Many times I’ve left you there
while you slept

END_OF_DOCUMENT_TOKEN_TO_BE_REPLACED

I am not what I am today,

nor what I was yesterday,

for simply I am what I am not.

Thus I am not what you see,

instead, what I aspire to be.

I am never truly one.

I am ever changing.

What you see today,

is not what you will see tomorrow.

And who I was when I wrote this line,

is not the same me that wrote this one.

rather, who I will one day become.

END_OF_DOCUMENT_TOKEN_TO_BE_REPLACED

travels from the other side of the city

to the window of my bedroom.

as well as the world outside,

where trains run and vehicles rush,

where people come and go.

The roads and streets are not so far away.

They are right there

outside my screen window,

through which the sounds seep into

and slowly sink in my room.

For a lot of nights,

my window screen worked as a radio.

From it, I heard the small rain hitting the roof, the

rustling sound of a television, the

soft crying of a baby, and someone’s

bedclothes fluttering in the wind, and sometimes,

the crisp sound of flipping on a light switch…

For how many nights,

with the background music of the bustling city.