The Village of Bones: Sabalah’s Tale

A novel by Mary Mackey

Published by the author in association with Lowenstein Associates 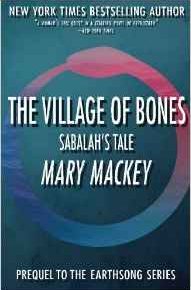 Mary Mackey’s new book is a prequel to Earth Song, a highly praised series of novels set in a speculative world in the millennia before the blossoming of the ancient civilizations of Mesopotamia. Earth Song, beginning with The Year the Horses Came, follows the epic story of Marrah, the “savior of her people” and later princess-queen of Shara, a settlement sacred to Mother Earth, and of her daughter Luma, who carries on Marrah’s tradition of leadership and heroism.

The prequel takes us back a generation – to 4387 B.C.E. – to tell the story of Marrah’s own mother, Sabalah, Daughter of Lalah, and of Marrah’s birth and the dramatic, celestial, and nearly fatal events surrounding it.

And a stirring tale it is. The widely published Mackey is both a storyteller and a poet, and tells her tale beautifully and economically. And her story-telling skills have rarely been sharper than in this breathless narrative. It begins with the young woman, cursed with childlessness, about to be overcome by a sudden tempest during a fishing expedition in the middle of what today we call the Black Sea, and who is spared by a vision of the sea goddess herself – in the still eye of the storm, surrounded by the whipping gale, the goddess offers a numinous vision of Sabalah’s future and the future of her child.

Along the way we are presented with a speculative but not entirely implausible details of a culture based on worship of Mother Earth and other goddesses; details owing much to insights found in [ ]’s Chalice and the Blade and the scholarship (expressly acknowledged by the author; the novel is partly dedicated to her) of the late historian Marija Gimbutas.

In fact, the cultural world Mackey creates (both here and in the three other volumes of the series) may be, after the thrills of the plotting, its greatest strength: Mackey provides a fantasy, partly based on fact, partly on reasonable inference, about an unquestionably attractive way of life and in many ways a deeply desirable world. Perhaps too desirable, as it sometimes challenges credibility.

This world is called here the “goddess civilization,” though there are no cities as such; instead there are many small, village-like settlements, where people live a simple life based on hunting, fishing and rudimentary agriculture, punctuated by religious rituals and festivals based on feminine deities (the lack of any male, to say nothing of bestial, deities is one of this world’s curious lapses from plausibility). The material culture is based on stones, fired clay, plants – wood, bark, leaves, grasses – fish and sea life, and wild animals: leather, skins and fur, feathers, and (in one singular instance) bones. There is no use of draft animals or animals raised for food, though there is a rich culture of using animals as talismans and symbols: dolphins in particular are “sacred to the goddess” and their images proliferate in seaside communities.

Women hold most of the positions of honor; though men are by no means scorned – they are loved and desired openly as playmates and lovers in the (again speculative) sexual paradise of the goddess depicted here, where sex is sacred and children are brought up semi-communally. Men’s principal role seems to be as helpmates to women; there is, curiously, no mention of them at all in the founding “six commandments” handed down by The Divine Sisters, a mysterious group who seem to have established the society’s foundational moral laws and religious practices. The third commandment dictates “Honor women.” According to the dictates of the goddess, all living things are sacred and therefore to be honored. So why emphasize honoring human females? It seems redundant. Does it mean don’t particularly honor men? Since nowhere in the commandments are men even mentioned, you have to wonder. And who, after all, is being addressed? Are women only being told to honor women? Are men thereby let off the hook, so to speak? It’s another curious lapse in a story that is otherwise so thoughtfully constructed.

There is in the story, here and there, excusable poetic license: writing has just been invented (though there is little material evidence for writing for another thousand years). Relations between the sexes are depicted as smoother than most of us have experienced outside of honeymoons. And members of the goddess culture are almost too good to be true – generous, trusting, good-natured, sweet-tempered, forgiving, long-suffering; they only lose their graces when, for whatever reason, they turn against trust in Mother Earth (as happens among the Mordai, the principal source of terror and drama in the latter half of the book) or among the “beastmen,” the lurking terrors of the future who hover at the edges of the goddess civilization, roiling the steppes of central Asia, who have abandoned worship of the earth for worship of the sky..

No story gets very far without a villain, and in this story, as in the Earth Song series as a whole, the villain is clear from the beginning: the male-centered sky-god worshippers, and any who have turned their backs on the Earth and her gifts and commands. This makes for a neat moral distinction, which helps fuel a dramatic plot, though it woefully oversimplifies history, society and culture. That is not very important for fantasy fiction, though it hurts the story’s ultimate credibility. The author seems to want to have it both ways: the freedom and moral simplicity (with Great Heroes and Vicious Villains) of fantasy fiction and the credibility and complexity of serious historical (albeit prehistorical) fiction. But these two are in conflict. It isn’t a fatal one, but the story would have been more effective if the author had settled on the rules of one or other of the genres. I enjoyed the story, and I believed in it – but I rarely believed it. It often felt like the script for an animated movie – which rarely attains that slightly corrosive taste of reality I look for in fiction if I am going to give it my wholehearted credence.

The characters lack the complications and contradictions of adult fiction, so I assume the book is meant for a YA audience. Sabalah, despite being an entirely sympathetic character, lacks complexity – she never seems to have had an evil impulse in her life and thus comes across as a bit of a meritorious blank – I was unable to see her nearly as vividly as I could (for example) the youthful Marrah in the opening chapter of The Year the Horses Came, which is included as a bonus at the end of the book.

The novel comes with a useful, short glossary of terms and an acknowledgement of sources, for those who wish to research the signs of an early goddess civilization for themselves. And the book certainly whets one’s appetite for just such an exploration.

Christopher Bernard’s novels Voyage to a Phantom City and A Spy in the Ruins are available from Regent Press and through Amazon. His new book of poetry, Chien Lunatique, will be published in May. He is co-editor of the webzine Caveat Lector.