Poets of the Fall: Belated Interview and Self-Discovery 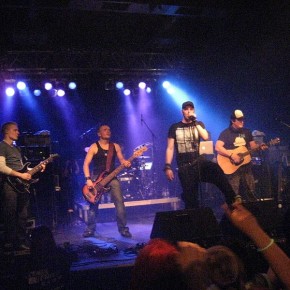 I first listened to the Finnish band “Poets of the Fall” in 2006. I was just starting college and they had just released “Carnival of Rust”; their second album. The first song that I listened to was “King of Fools”. I was awe-struck. It felt like I’ve been chosen to guard an ancient god that only whispered its secrets to me.
The guitar solo was great. The vocals were raw and emotional. Every single aspect of the song suddenly made sense. To a lonely, angry teenager, “Carnival of Rust” wasn’t just an album, but more of a way to adapt to the 2000s while carrying a hormonal hurricane deep inside you. Mark Saaresto’s –lead vocal- voice was more of a Jiminy Cricket to the wild, troubled writer who lived within me.

As he gently whispered lyrics from their song “Illusion and Dream”:
Hear them sing their songs off key
N’ nod like they agree
Buying the need to be discreet
Poof, my weariness would magically disappear. I would find courage and strength within to go on.
Okay, first things first.
Proper introduction: These guys are technically salt of the earth. Singer Marko Saaresto, guitarist Olli Tukiainen and keyboardist Markus “Captain” Kaarlonen started from scratch throwing everything away to seek the yellow brick road to art. Their songs tackled various subjects from life to sex, death to joy, and despair to empowerment. Their most recent album “Jealous Gods” reached the #1 spot on the Finnish album chart and the #1 spot in my heart as well. A collection of instrumental versions of five of the band’s songs will be released February 16th in an album under the title “Instrumental Collection Vol.1”.
They say every critic is a failed artist. That’s true to a point. I’ve always dreamed of being a rock star. As I juggled failed auditions to be a female lead vocal from one contraband to the other, I realized that writing about music could be easier than actually pursuing a musical career.
I had the privilege of representing Synchronized Chaos magazine in interviewing the “Old Gods of Asgard” via email and the result was a sincere and thought-provoking insight into the kitchen where the Poets shed their skin and become dragons, monsters, demigods and superheroes. One of the best things about “Poets of the Fall” is that their darkest melody never gives in to despair. Poets of the Fall’s lead vocalist Marko Saaresto described the musical process as an “inner need to write music” or else it would be “a short-lived love affair”.
Isn’t that just spectacular?

A true artist would be understood from the way they describe the creative process. In Saaresto’s words, “Everything around us affects everything we do. Mostly it’s the daily experiences we stumble through, which conjure an emotional response, which then translates into music with us. The creative process is almost like speaking without thinking, very intuitive. You just go on about what you feel. Only you do it with a guitar, a piano, or with your singing voice.Then you will need the ability to stop and think about what you just expressed in your given instrument, make sense of it and coax it into a working piece of art, music.”
It’s interesting to imagine how a song like “Temple of Thought” was born. What were the influences behind it? What kind of emotion did it stir in Saaresto’s voice or Jaska Mäkinen’s and Olli Tukiainen’s guitar works? Saaresto describes giving birth to their songs as: “every song is a story in itself and doesn’t necessarily have anything to do with any other piece on the album, at least when it’s first written. The songs are all pretty intuitively written in the beginning, so they stem from experiences and emotions.”
When I prepared questions for this interview as part of the Synchronized Chaos creative masthead, I was 24 years old. I had just started my career and was –nearly- a fresh graduate having finished Pharmacy school in 2011. Years, experiences, self-discoveries and heartbreaks have become between who I was back then and who I am right now. Yet the Poets’ music has been a constant companion ever since. My appreciation for their art was never altered even though my perception of the songs has changed.
A song like “15 Minute Flame” with its revolutionary guitar riffs and the tempting powerful lyrics was most certainly a song that I had imagined to be sung for me by a lover. A young girl in her early twenties, a tormented poet, a shy being with no romantic experiences other than the casual high school and college crush would dreamily imagine a faceless guy bearing Mark Saaresto’s soulful voice as he sings:
If I lack your tears of joy, please forgive my heartless ploy
Said the fool to his majesty dethroned
It appears me to me now -28 years old and bearing about a dozen relationship experiences- that my mind was so warped around the idea of men “the doers”, women “the vessels”. I was a recipient of love, of kisses, of magic, pick your disease. The lyrics had to fit my imaginary partner when in fact they fit me. Embracing feminism fulltime in 2014, I realized that the power of “Poets of the Fall” emerges from their gender neutral air.

Most rockers and metalheads sing with the air of masculine or feminine authority; from Joan Jett to Led Zeppelin. Even Michael Jackson sings from a very masculine –if a bit zombie-sh, alieny- sound.

With Poets, you are not alienated. It doesn’t matter if you are gender queer, intersex, trans or cisgender. You’re invited to the party. The song is a ball of energy that gets thrown at you, so you become immersed in the feelings it evokes. You become the singer and the poet. Now as I embrace my feminist, doer, ignitor persona, I come to realize I have been acting out the songs subconsciously all through my years of relationship. I was the jester in “The Poet and The Muse” and “Daze”. I was the soldier in “War”. I was the hard rocking guitarist who soared with their music in “Lift.”
Every fan of Poets of the Fall has been part of this process as described by Saaresto, even if they never get a chance to live it, “I may write some bit of poetry at home and Olli may fiddle with his guitar, also at home, and two weeks from that, Olli plays me his idea, and I hear it fits with something I wrote a few days ago etc. It also often happens that we have a piece of music, like a riff or a beat or something, and that evokes such a strong reaction from me, that I instantly have to start singing and writing the lyric. It’s crazy sometimes, but creation asks not what time it is.”

Poets of the Fall are often criticized as being too sophisticated with their lyrics for this genre. Their power lies in their lead vocalist, because their music –great as it is- sounds pretty tame and nuanced. As much as they experiment with their lyrics, they barely escape their “too” familiar musical sound. With “Rogue” from their sixth album “Jealous Gods”, you welcome the instrumental track as a breath of fresh air. However, deep down, you secretly miss Saaresto’s voice. While the music mainly relies on the building up of a very specific sound for the band, the vocals vary and peak with every album.
You can easily track the evolution of Saaresto as a vocalist, especially in songs where he is left to shine with the music serving as a complimentary element, not the solid ground on which he stands. Some of the songs where Saaresto reaches his epitome vocal fluidity are: “King of Fools”, “Daze”, “Choice Millionaire”, “Brighter than the Sun”, “The Poet and the Music”, “Temple of Thought”, “Cradled in Love” and “15 Min Flame”.
As you trace the way he crescendo(ed) his way up the vocal range, you might come to the belief that you have never heard a voice like Marko Saaresto’s. Ever. It’s a rare given to us poor souls of this century to be handed such a piece of treasure in the form of a voice that can toy with our emotions and send us on orgasmic roller coasters. Listening to his signature baritone vocals, skyrocketing with a verse in “Carnival of Rust” or softly coaxing us into a dreamless precipice in “Sleep”, you discover that Saaresto is a force of nature. His voice is art unfiltered and titrated to musical perfection.
Another interesting aspect of “Poets of the Fall” would be the alter-ego that Marko Saaresto takes on in his music videos. From a Kefka-like jester in “Daze”, to a sort-of-mime character named Jeremiah Peacekeeper in “Carnival of Rust”, “Can you hear me” and “Temple of Thought”. He was given a name in the band’s song “The Ballad of Jeremiah Peacekeeper” from their album “Temple of Thought” but he had been a persona that Marko puts on whenever he goes on stage or chooses to visually represent a song (in music video form). This alter ego is called the original “Poet of the Fall” by Marko in a 2011 interview with Ksenia Artamonova from HeadBanger.ru.
So there’s this poet, like nature he is both kind and cruel, innocent and mischievous, romantic and wild. He whispers those songs to us at times of darkness. He allows us to find that dark side of ours and embrace it, without losing ourselves completely to the dark side like –for example- how Marilyn Manson or Ozzy Osbourne encourage us to. He is there, like an old Nordic god, in almost every song by the Poets and almost every lyric. As complex the words are, as complex his persona is. He is like the manifestation of a poetic purgatory, and he only picks those who can see past the initial meaning.
Through his answers, Marko jigsaws between the mundane to the extreme. He is open to all kinds of music as well as movies, “I like all sorts of stuff. Mostly action, adventure, thriller and drama work for me. Sometimes I like to take a splash of good horror too. I don’t watch that much comedy, as they tend to really suck, pardon my French. When I want to laugh, I watch stand up. Some of those guys crack me up so hard I can hardly breathe.”
This diversity shows in “Poets of the Fall’s” songs and ballads. From the hard rocking “Lift” and “Running out of Time” to the emotional “No End, No Beginning”, there is nothing the Poets wouldn’t do or try for as Saaresto mentioned, “it has never occurred to me to divide between country of origin when watching a movie. It’s really up to whether the story is interesting to me and if the movie’s done well enough.”
It was a great pleasure interviewing Marko Saaresto from “Poets of the Fall” but it would have been even a greater experience if I could do it live and now that I’ve seen whatever and gone through whatever. Regardless, it is still an immense blessing to be a fan of those guys and anticipating what they come up with next.