A house divided against itself cannot stand.”

The almost-deadly attack by a gunman at a Republican baseball practice on June 14th briefly focused national attention on the dangerous level political polarization has reached in the US. But it’s been trending upward for decades.

Since the 1970s, ideological polarization has increased dramatically among the mass public in the United States… There are now large differences in outlook between Democrats and Republicans, between red state voters and blue state voters, and between religious voters and secular voters. These divisions are not confined to a small minority of activists — they involve a large segment of the public and the deepest divisions are found among the most interested, informed, and active citizens.

Alan I Abramowitz and Kyle L. Saunders, The Journal of Politics, “Is Polarization a Myth?” 2008

Many of us thought Obama was an inspiring figure, as the first African-American President, and he would unite the nation and reverse the trend of polarization. It didn’t turn out that way.

And now, an even more polarizing figure holds the office of President of the United Sates. The extremity of our angry national division is summarized in “Polarization in 2016” by Matthew Gentzkow, Stanford University.

This is the year of Donald Trump. It is the year Republican primary voters applauded proposals to build fences on the border and to ban Muslims. It is the year that the leading Democrat in New Hampshire polls was a self-proclaimed socialist who favored 90 percent top tax rates and a $15 per hour national minimum wage. It is the year we all decided once and for all that those on the other side of the political divide didn’t just have different priorities, didn’t just hold different opinions, but were out to destroy the country and everything it stands for. Americans in 2016 are more politically divided than ever before. 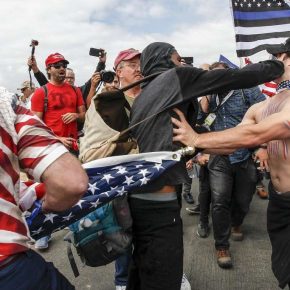 The finality of the presidential election results was not an antidote to the irrational passions inflamed by the angry rhetoric of the campaign. Facebook lit up with even greater vehemence after Trump’s election and then again at his inauguration. By hurling insults and ridicule at right-wingers my left-wing friends were releasing their fury over Trump’s election and taking their revenge for the assaults against Obama my right-wing friends posted during his presidency.

Social media was not serving as a forum of healing with meaningful conversation about where we go from here after the conclusion of the 2016 presidential campaign. It wasn’t used as a medium to develop greater understanding between partisans on opposite sides of the political divide. After the election social media was just another place for disappointed Democrats to howl their rage at their political foes and where Republicans could express their triumphant glee.

Offline, some voices began to plead for a more civil approach to politics. US Senator Orrin Hatch even penned an essay for Time Magazine bemoaning the polarization of his colleagues and calling for a return to bipartisan civility. In the Winter 2017 issue of The American Scholar Amitai Etzioni urged his fellow liberal progressives, “who wish for a less reactionary America”, to engage with, rather than despise, Trump voters.

Clearly, not all of these Americans can be reached by new progressive thinking, but respect for their fellow human beings and political prudence suggest that all of them should be approached as if they could be. The question is not only whether a new progressive movement can appeal to the less extreme elements of the Trump constituencies, but also whether progressives can understand the legitimate anger and frustration that many Trump voters felt and still feel, in the hope of creating a more workable, just, and peaceable society.

Is it really that hard to listen and speak respectfully with people we disagree with politically? The admonition of Etzioni, an internationally respected scholar writing for the journal published by the academic honor society Phi Beta Kappa, is giving his readers the same kind of advice given by Robert Fulghum in the popular book series from the 1990’s, All I Really Need To Know I Learned in Kindergarten. The implication is that even the best and brightest among us have regressed into angry children misbehaving on the playground.

Is it too much to ask that we treat those with whom we have political disagreements as conscious adults? Could Facebook, as the largest communications network ever created with its billion users, serve as the medium for a grassroots movement to reverse the trend toward greater polarization? What if, instead of ranting or narcissic blathering, Facebook was used as a forum for rational and meaningful discussions about the important issues that need to be decided?

I decided to try to answer those questions with an experiment on my Facebook page. I invited my 680 friends to participate in a series of discussion threads about “hot” political issues.

The response of one of my progressive-liberal Facebook friends was:

Thank you. Jeff’s idea is totally wonderful in theory, but when you factor in racists, bigots, and brain-washed religious fanatics who have not and will not ever listen to facts, reason, and measured attempts to “understand” the fact that they’re haters, it won’t work. The operative word here is FANATICS. They have abdicated all rights to be treated with respect and courtesy. And the Democrats are only finally opening their eyes to the fact that you can’t negotiate with FANATICS. You either fight them on their dirty, ugly, Trumpian turf, or you die.

Undeterred, for several months following the Trump inauguration I encouraged pro and anti Trump friends to participate in the expeirment. My only request was that contributors not attack each other, although they were free to criticize political figures. It worked. 63 friends participated in the initial discussion threads and more joined in as time went on. Several started their own discussion forums.

Angry, and even nasty, remarks were posted about Trump, Clinton, and other political leaders. But the request of no personal attacks against participants was honored. 63 diverse “friends”, including pro and anti Trump, blue and white collar, Baby Boomers and Millennials, high school grads and PhDs, urban and rural, from various states mastered their fight or flight response to participate in the Facebook discussions. The topics ranged from immigration reform, US policy in Syria, to relations with Russia, the Paris Climate Accord, and even abortion.

Divisions on the issues tended to mirror the Trump/Clinton divide with some exceptions. For example, some Trump and Clinton supporters agreed the US should end its military involvement in Syria, while several on both sides agreed with the status quo. Only Trump supporters argued that the US should increase its military involvement in the Middle East. A few Trump supporters lined up on the pro-choice side of abortion. One anti-Trump friend took a pro-life stance.

The point was not to change minds. It was to find out whether political “opponents” could engage in respectful debate in Facebook without resorting to insult and ridicule of each other. A few participants only contributed unhelpful one-liner comments. The thread about whether Jeff Sessions should be confirmed as Attorney General morphed into a debate about whether Bill Clinton should have been impeached and prosecuted for lying about adulterous affairs. But most of the comments posted were evidence based arguments on the issues.

I summed up my own response to the experiment with civil discourse on Facebook with this post:

I would like to wind up this experiment of trying to encourage civil discourse on FB about tough political issues by thanking all of you who have participated. I plan to write an article (maybe a book) addressing the question of whether civil conversation can take place on FB. These conversations are proof that it is possible. It’s tempting to use social media either to shout your own opinions and insult those who oppose you. Or, to huddle only with like minded friends, so you’re never challenged by reasonable views different from your own. Yet, most of us agree that growth comes from exposure to new & different information, interpretations, analysis, and conclusions. I think we don’t use social media to its full potential when we hide from opposing opinions or just attack those with whom we disagree.

Disturbing statistics about the loss of faith in democracy and a willingness to turn to authoritarian rule are compiled by Roberto Stefan Foa and Yascha Mounk in “The Democratic Disconnect,” Journal of Democracy, July 2016. The authors found that “world values surveys” since World War II reveal a trend of increasing cynicism about the value of political participation in Western democratic countries. Millennials are the most disillusioned generation in the modern era about democracy, since polling data has been compiled. 26% do not think “free and fair elections” are important, according to one of the surveys citeed.

The decline in the commitment to democratic values is related to an increasing feeling of powerlessness and anger among Americans. The anger and recrimination of the electorate manifested during and after the 2016 campaign reflects more of a hatred for the other side than loyalty to our side. The inclination is to lash out rather than produce rational arguments to support what our party and candidates stand for. That was the way both the Trump and Clinton campaigns were run, and too many of us have followed their leads.

If we leave it up to the political parties and politicians to take the lead, it might get worse rather than better. Launching attacks or siloing in social media is not going to help reverse the trend.

Instead of using Facebook to bash political opponents, it can be a forum for hashing out disagreements and possibly finding some common ground on important issues. We can at least develop a better understanding through civil conversation of what divides us and why. That would lower the temperature of our body politic so more moderate-pragmatic voices could be heard as an alternative to the shrieking of angry extremists.

The value of civil discussion on Facebook need not end there. After we’ve vetted our own opinions and arguments, we’ll have a firmer grasp of the relevant facts and better understanding of the issues. Then, we should move past the point of discussion to encourage activism by calling out politicians who behave undemocratically and do not act for the greater good of the country. We can ask everyone we communicate with in Facebook to join in political discussions but also to march, demonstrate, petition, call legislators, and vote for the best candidate.

Or, we can feed our primitive fight or flight impulse by lashing out in social media and then duck into our silos. If we do that, the unhealthy polarization of the time of Trump will get even worse. 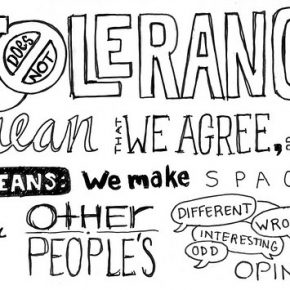 Jeff Rasley is the author of ten books; the most recent is Polarized! The Case for Civility in the Time of Trump, which was inspired by the experiment in civil discourse on Facebook.

1 thought on “Essay from Jeff Rasley”