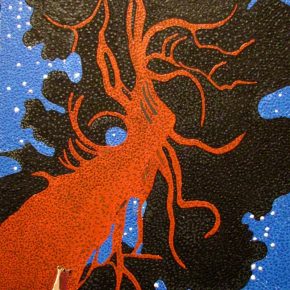 A Fox as Fey Totem

Why does the fox that divides the grass tempt me so?
Hasn’t the black whip of the snake hardened my heart?

Left behind, I seem to have a knack for abandonment.
A coven of vixen skulks from its den, stealthy and mad

as dreams.   They are a brown crust of sleep that fades
into  red-ribbon sunrise.  These feral children summon

me;  my soul is a dark forest.  Like any forsaken creature,
I lap up my philosophy of blood.  I have no conscience:

I seek out these scarlet whores as I name my unborn children.
And you, Fox about to disappear into mist, a red gash

of autumn still asleep on my chin.   You have charmed me into
embracing my savage self. They call me the disciple of Rasputin,

the Godson of Caliban. Is love such a fiendish discipline:  my beard,
pelt red, my dog’s head throbbing scandal,  my heart drenched

in Holy wine? I am beguiled by sly brides. I have been reluctantly
corrupted.
Oh, to be surrounded  by vixen in the seductive tapestry of trees.

I have not confessed my intent, nor left my warm bed
of dreams to meet them among a sentinel of fir.  If you examine

my crooked heart, you shall see I am both beast and master,
gamekeeper and  vixen,  a rifle and a thieving fox.

Living in the Body of a Scorpion

I grow old I grow old, I shall wear the bottoms of my  trousers rolled.
– TS Eliot

Rumor has it that we are powerful, but left to our own
devices, we aren’t that much.  A Goddess thought she tamed
us, but through naming us, we were released

from our poison. Words are more  heady than life or death,
by swerving a path through imagination, that is release.
Compassion, we have no use for it. Is a man any less

dead because of wishing it so? Are we less dangerous
without sinister intent? Hear what I say, it was a woman
who polluted our stinger with remorse. We are what

we are,  something you can depend on.  That makes us
reliable and comforting, ancient and closer to god
than to the fickle nature of  the devil.

It would  be foolish to believe that my brothers and I
are earnest in our endeavors for peace. To exist, we rely
on higher blood, both kinds, theirs and ours.

A Poem for Ashes

Just as I move from lip to urn, to coffee can for ease
in transport, the eternal butt mass produces more of us.

We imitate ghostly snakes, we writhe and grow
like a runaway dream.  We are the mist off Capri,

the languid soul as it enters bergamot air, sea-salt
and goats drenching the pores on a rocky hillside.

A sooty diesel train rocks us in our death-crib then
we are spilled at the station.  We are gathered

and cupped in an enemy’s hands, reviled and praised
all at the same time.  One myth has us suffocated in

cement, unable to leave this place, forever bound
to all future dreamers.  In truth, we are satisfied to

sleep in a bowl on a poet’s mantelpiece, a pinch
and sprinkle swimming in a Martini potion (and sometimes

morning tea), we taste like lapsang oolong.  We are a last
spell as we conjure the unforgiven back to our lair.

She called me the “Town Boss” as I was her best guard, but behind her back?
I called her a twisted desert crone. I must tell you, that bitch was never

satisfied unless I filled their shoes with blood. A Catholic reference? I had to
survive, wasn’t permitted to be religious. Consequently, I strayed

to the church a half mile away. She was no one’s God. She thought she owned
everything. How can you tether a splash of blue, a cumulus or a mountain?

Juan Hamilton and she imagined they ruled the world, but humping her
was like straddling an adobe wall. She was dry and brittle as one of her

bones, he attended her in the same way he could make a dull pot
interesting. He treated us with more respect than she did, I imagine we

were just her pets. When she tugged my ears I yelped and she liked that;
she liked to inflict pain which is why she left Juan everything. By then,

her grubby relatives were just silent shadows and spit. A lion never forgets
his duty, but a cactus depletes the soil. In those days, when I was half hers

and half my own back, I would lap at my water dish, joy evaporating as quickly
as the wet on my tongue. This is how my life went. I was married to her

bones, haunted by rabbits I was too old to out run. A blue plate special sky
could not be reined in like a kite while she chased those eccentric flowers.

To avoid death, I confess, she must have become a tumble weed.
No longer Maypole Dog-Queen, a cruel splinter growing in my mouth.

In 1985, while pursuing a business degree, I unhappily landed in a creative writing class and announced to the group that I thought Walt Whitman was a chain of schools throughout the United States. To my astonishment, I had found my pacing, abandoned prose, and started a poetry circle that has been meeting for 16 years. I have published three poetry collections, most recently: “Wonder” Little Lantern Press (out of Wales).  https://www.amazon.com/s/ref=nb_sb_noss_2?url=search-alias%3Daps&field-keywords=Laurie+Byro  I am the Poet in Residence at the West Milford Township Library and despite it all, love New Jersey, and have lived here almost 60 years.

3 thoughts on “Poetry from Laurie Byro”