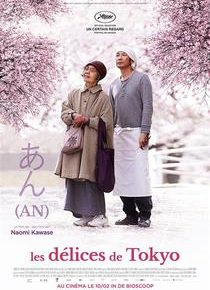 Full of poetry, Les Délices de Tokyo, a movie directed by NAOMI KAWASE, is a film that imprisons us inside the screen. Gradually we forget everything around us, until we almost refuse to be confronted with the end of this wonderful piece of art.

At first glance the story seems trivial: one Spring’s day, Tokue, a 76-year-old woman approaches Sentaro, the chef of a small restaurant. Sentaro mainly sells dorayaki, a small cake filled with red-bean (azuki) jam and Tokue explains him that she always wanted to make them, she implores him to let her have that life opportunity. He tells her “no” but she leaves a small sample… and he finally accepts.

Aditionally, there’s a teen named Wakana, a very perceptive person, a regular customer, who ultimately also applies to work at the shop. Together they are a family, Tokue, as the mother of Sentaro and Wakana, and a “mystic” member who seems to glue together all the feelings of these characters.

We can’t imagine a possible end to this story, but Tokue gives us very subtle clues, for example, when she speaks of the natural world in a way that might seem strange to us because she’s much more aware of nature than most folks inside a city… There’s a sense of being different, being isolated inside the grey walls of buildings in open air. Tokue’s eyes emanate compassion in a mysterious way.

We are only able to understand them when the owner of the restaurant learns that Tokue is a patient who lives in a leprosarium… and demands Sentaro fire her, something he refuses but must accept at the end.

When Sentaro and Wakana visit Tokue, for the first time, at her home, the leprosarium, the vivid Wakana alerts him that he will be seeing people with deformed faces. When they meet the patients, the lepers are talking together, smilling, happy despite their reality: they are also a family. That’s the power of being accepted as we are… despite our differences, our different ways to  see the universe and the different ways others see us.

Also, there’s no victory against nature here ; the nature of disease. On the contrary, Tokue determinedly accepts everything… especially without words, simply with the way she looks to cherry blossoms. She sees herself as a piece of the natural world, destined to live and to die. Maybe the fact that the actress deals with cancer in real life helps her with this role.

At the end, we remember the moment when she explains she had to release the canary Wakana gave her… he asked her to do so… and this, combined with the fact that she confesses that after her death, through a cassette recording, leaves us a final thought: a timeless reminder that our mind wants to forget that we are sick for awhile so that we can be happy during all moments of life. That’s certainly the secret of her azuki jam.

This movie explains the human condition in depth: the capacity of small things to change our lives; the importance of simple ordinary people; the power of chance that can transform small moments into important parts of history. The photographic look of the film’s scenes additionally help the director with this therapeutic message. The random bubbles of the boiling beans and Tokue’s coat, with colors resembling cherry blossoms, look like living creatures. Visually, even minor background objects come to life.

This is a movie about the most important people: the simple people.