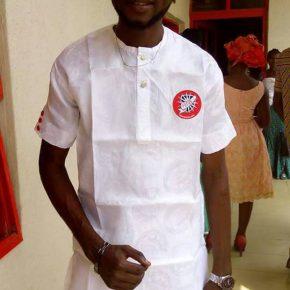 Synchronized Chaos International Magazine interviews Akinmade Zeal here so that he can describe his inspirations and thoughts in more detail.

Please provide some background on your pieces that would help someone from outside Nigeria understand your two poems.

The first of my poems, Father and Son, as I have said, is a poem that talks about racism and class prejudice in contemporary society. I like to say it is a post modern piece. It is immanent, transcending beyond the Nigerian setting. Nigeria happens to be the microcosm of the macrocosm (the world) in the poem.

It is a dramatic poem. You find the father, a more experienced person in the world, educating his son on the evils in the world. The child comes back from school, battered and with the taste of bile in his mouth. His father eavesdrops and comes over to educate him; tells him he will put him in a better school so he can meet people of his own social class and fit in better. But, his father also was quick to remind him that even at the new school, he would find no peace. ‘Peace cannot romance with men as beast as they are’ unless they crush class, hierarchy, bigotry and so on. That’s the only condition for peace. It depicts the nature of the world generally,  not just Nigeria. It is sheer coincidence that the poet is a Nigerian and sets the poem in a Nigerian context. He is of a more radical perspective, not parochial, nor oblivious of what happens outside his own setting.

The second poem is a rather more complex work. Every line of that poem, A Whim To Lie, is symbolic and saddled with imagery. It cannot make much sense to A South African, it cannot make much sense to A Ghanaian, it cannot make sense even to a Nigerian from the minority Hausa, Ibo, Ijaw groups we have in Nigeria. The poem would only make much sense to A Yoruba (the majority tribe in Nigeria to which Soyinka belonged) person who is well familiar with the pantheons of the Yoruba people. If you study Soyinka to the letter, you find him talking about Ogun, the non benign. Ogun is one of the gods of the Yorubas. To understand that poem, you need understand how these gods work in the Yoruba settings. Ogun is known to be a keeper of sacred oaths, sanity, and the god of iron, and he was so feared that he was said to relish bathing in blood. Ogun is still worshipped here in Nigeria by motorists and cyclists as they see him as the pinnacle of their existence and profession.

A Whim to Lie is also a postmodern work, a social satire about politics and contemporary ills in Nigeria. The Christian God in Revelation 22 says : ‘Behold, I come quickly and my reward is with me to give unto every man according to how his works had been.’ I have placed the traditional Yoruba gods up on a pinnacle to perform that function, judging every African and asking to hear all the ills of the land. I tell the reader that I would have to lie to the gods if they wanted a report on the world’s behavior.  Otherwise, would I have to tell them about the money the politicians bury in Ikoyi building (How shall I tell you our fertile soils?  How shall I tell you Ikoyi spouts legal tenders? These are facades of the truth I lack the temerity to tell)  Acertain politician here in the country who stole money and kept it in Ikoyi, Lagos, Nigeria is the object of my satire there. I reported his behavior to the gods, as our demiurge and arbiter.

Again, I talked about the Big Brother Nigerian reality show here where a certain lady bares her breast live on the T. V.  That’s not something we tolerate in our culture, it’s un-African. I spoke to the gods about that, telling them to not be angry should I lie, for I cannot boast the courage to tell them about her lack of modesty (our damsels bare their breasts for bigger brothers).

It could go on and on. If you understand the Yoruba pantheons, you would unearth the poem sheepishly!

The writing I have seen from modern Nigerian poets who send pieces to Synchronized Chaos, works translated into English, tends to include a lot of social criticism and a darker view of human nature. Do you think that is a valid observation that applies to more current Nigerian writers, and if so, why?

Nigerians have no choice but to satirise the society in which they find themselves. Nigeria is such a beautiful country, rich in all facets, lands, gold, petrol, bitumen, everything you could ever imagine. But as Soyinka would say : ‘we have enough for our need, but never enough to satisfy our greed.’ In a country where the politicians have such awful greed and brutish behavior that they could steal what they don’t even need, you expect such  literature from the people. You expect that they explore the dark nature of the human mind. That spurs the peculiar literature that teems throughout Nigeria.

Also, I’ve observed a lot of colorful imagery about places, foods, etc – very descriptive writing grounded in the physical world. And a style that’s very enthusiastic/strident (strong language and opinions, short sentences with exclamation points, etc). Would you say that was accurate?
Very accurate. You should know that the English language has broken bounds and barriers, flown to other territories that had their own tongues before the usurping English language arrived. The people had blended it to conform to their taste and purpose. So you expect such usage.
Do you think that we can describe or identify a ‘Nigerian’ style of writing or not? Of course there’s diversity among individual writers, but do you think there’s enough in common among enough people to be able to point to the existence of a Nigerian style?
Writers are inspired differently.  I am inspired by Wole Soyinka who happens to be from the western part of Nigeria like myself. His books had helped shape my view of Nigeria . When he says ‘the man died in all who kept silence in the face of tyranny, ‘ I made that line my line, made it the path I toed. We could exploit the same theme, but as Nigerians, writers of different background and influence, we would exploit a theme from different angles. Take for instance the three great writers you all know from Nigeria : Wole Soyinka, Chinua Achebe and Emecheta, you would see they write from different angles. Such is still the case today!
Is modern Nigerian creative writing following in the tradition of the internationally known Nigerian writers (Soyinka, Emecheta, Achebe, etc) or is it developing into something different? Or both?
I think not. It is fair to say that these writers are our founding fathers, but we have developed and explored much more than they did. A man dances the dance prevalent in his own time. In their own time,  genres such as eco literature, eco criticism, for instance, were not in vogue. Feminism was not known. But today you find writers like Chimamanda exploring Feminism, you find Niyi Osundare exploring nature in his works. Literature has taken different turns from the pathway the early writers laid down. But they surely influence us.
What do you think has inspired Nigeria’s rich literary tradition? Is there something that makes Nigerian writing different or unique, on average?
Nigeria isn’t only rich literarily, it is rich in tableau, art, nature, heritage and history. And all these can be presented, explored in literature. This is the only reason for the richness of African literature.
You mentioned that there’s an up and coming poetry and writing scene in Nigeria. What do you think is inspiring people to write?
In Nigeria you always have many things to spur you into writing. First of all, your conscience. Wole Soyinka, for instance, has made me understand that the geographical boundaries of injustice extend to embrace the thousands of cowards around the world who felt themselves protected by silence. And that the very act of silence in the face of wrongdoing  is collaboration. Your conscience pushes you to write in Nigeria. Then there are the rich themes here, including the natural world. One cannot ignore them. They are too poignant to be ignored.
People in the Western world talk a lot about how there’s no money in literature, poetry, journalism, etc. Is the situation different in Nigeria? Is writing a career path there or something people are motivated to pursue alongside a regular job?

Writing is hardly a regular job here. It is an act of sheer passion and motivation. Here in Nigeria you don’t get to earn from books, poetry or freelance journalism. Even getting your books published is a very herculean task. Very expensive. And if you manage to get a book published, you will surely have issues of piracy to deal with.  Intellectual properties aren’t respected here thanks to the culpable government we have. You need both a regular job and motivation to write here.