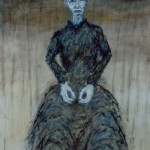 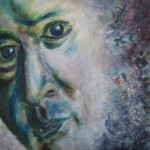 What is art about? More precisely, what are my paintings about? I have struggled with this question ever since I started to paint. Having copied famous artists’ work, made many still life and figure studies, and having painted for the simple sensual thrill of presenting beauty or ugliness, I am left with the certainty that art is much broader and deeper than these technical accomplishments. For me, art is incomplete if it does not transcend simple depiction of life, and enter the realms of the historian and the social commentator.

The intricate involvement with life, the sub-textual social criticism — unpolluted by overbearing propaganda — that is evident in the works by artists such as Matthias Grünewald, Albrecht Dürer, Francisco Goya, Max Beckmann and Käthe Kollwitz has begun to teach me how to connect myself, as an artist, to the world; and, most importantly, how to perform my duty to the society as an artist, to reflect the world through the expression of my feelings.

Growing up in communist China, I lived through the hardship and capriciousness of dictatorship. At the same time, I witnessed the way that for those who closed their eyes to the inhumanity of totalitarian rule, daily life was not always so grim: such people still worked hard, made merry, found time and occasion to smile and laugh. People can adjust to just about anything, finding comfort even in the predictable order of totalitarian society.

I thought that my escape from China would put such bitter truths behind me. But the closer I look at the society I live in now, especially in this era of wholesale assault on freedoms that Americans have come to take for granted, the more troubled I feel. It doesn’t trouble me so much to know that people in power covet and plot for more wealth and control: that is to be expected. It doesn’t trouble me to realize that people in power seek to brainwash the populace to sate themselves on shallow pleasure and hollow profit — one can hardly think of a more efficient way to dominate the populace than by conditioning them to cease thinking. What does trouble me is that there are so many who prove willing to trample the lives of others to gain money, power, sex, or products they crave. What troubles me is people’s readiness to barter priceless liberty for the illusion of safety. What troubles me is their willingness to believe craven lies and to grant people in power carte blanche, in exchange for the empty “sacrament” of super-sized consumption. I was baffled when I attempted to understand how Hitler could gain control of a nation of highly educated people, until I witnessed the rise of Pat Buchanan and the anointment of George W. Bush. I am troubled, saddened and angered. I am angry that our great nation is forsaking the foundation of our democracy. I am angry at the citizens of the most powerful country on the planet, for carelessly allowing our leaders to exert our indomitable might without taking upon ourselves the responsibilities that are morally intrinsic to the exercise of force. I feel a doomsday coming.

As a society, I wonder whether we have lost track of the human spirit. We live in a privileged time and place, with abundant materials to consume. We are blessed with scientific understanding of the physical universe and we have been able to plant our national flag in the virgin soil of the moon. But have we built the world we ought to live in? As an artist and a human being I have serious doubts. Can we truly be meant to be the masters of the earth, if reckless consumption, pollution, and mass extinction are the result of our mastery? Will we destroy our own civilizations through irresponsible selfishness? Will our extinction follow those of whales, tigers, foxes and dragonflies?

My heart aches when I think of the future. But at the same time I have hope. The struggle of individuals continue to inspire. The memory of Spring 1989, in Tiananmen Square with my fellow students, gives me hope. The enormous protests in San Francisco, Paris, London, Milan, and Madrid during the dark winter of 2003, against George W. Bush’s cynically manipulated, ideology-, dominance- and profit-driven, faith-based war on Iraq, promise me a new spring.

So much emotion: fear, anger, foreboding, despair, and also hope all tangled up together.

I have created my Apocalypse Series of paintings to commemorate human suffering and struggle, as my much revered Albrecht Dürer did during the raging Peasant Revolt, a mere five centuries ago.

Matthew Felix Sun may be reached at oatlantis@aol.com – and you may view more work at www.matthewfelixsun.com

1 thought on “Matthew Felix Sun: Apocalypse Series (click on each painting to view it individually in a much better format!)”