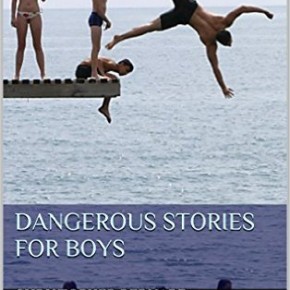 Christopher Bernard’s Dangerous Stories For Boys reaches into the abyss and brings us (men) back to a time and place where our world was full of doubts, fears, and lack of courage. Many boys finding their way into manhood become trapped in and stifled by society’s rules and regulations. There’s a deep psychological aspect to the experience of growing up into manhood. The age where it seems to begin is at ten and throughout adolescence. Many boys may find that their world is chaotic, disingenuous, and full of traps—emotional, physical and mental—all of which can be dangerous.

It’s hard for the boys to figure out what path to take in the midst of the experience of adolescence and pre-adolescence. As we see in one story, changes in one’s family, such as a move, only heighten the disorientation. Matt’s family relocates to the city after living on a farm and he struggles with the strain of transforming himself to survive in the new environment. There’s a profound difference between growing up in the country and in the city. However, meeting people of different backgrounds and cultures is a prerequisite for maturity, even a baptism by fire, as it has been said; but an important step towards developing into a fully mature and well-adapted person.

Many adult men have long since forgotten these rites of passage, but Christopher Bernard reminds us of those moments in a harmonious way. Each story has a rhythm that stays intertwined with the other in a cadence that works well. My thoughts followed the lives of these young men, anxious to see how it would all turn out for them. I found myself reliving my own story of growing up, which made me feel frightened and uncertain of my future. Attempting to control each event becomes futile as the environment shapes the characters’ actions. Still, as with the other boys, even while going through a maze of fear and disorientation, Matt resolves not to surrender to his new world and to maintain his identity.

“Shadow in the Water.” This story is intense and familiar to us. Alan must question his own values, and his strength in order to be himself. It’s difficult to walk away from the challenges of peer pressure to say no to others. Alan finds himself confronted by realities that challenge his fantasy that he can be just one of the boys.

It’s impossible not to continue to follow the story without remembering your own experiences. Story after story, Bernard gives us something to contemplate. The reader cannot help but follow each boy through his adventure and have concern for him. As you become attached to each one of them, you are exposed to your own shadows of the past. I found some stories long only because I wanted to know what would take place with the boys. But it was worth the wait to read the ending without skipping pages.

Christopher Bernard’s Dangerous Stories for Boys can be ordered here.