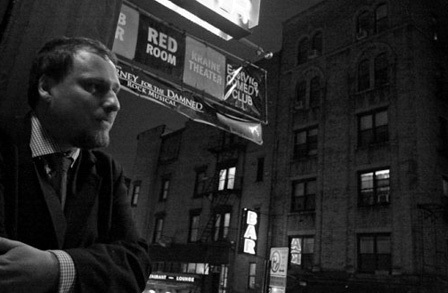 There are books of poetry that, if only readers could be induced to pick them up, might change their minds for good about the supposed incomprehensibility, preciousness and irrelevance of modern poetry. Ernest Hilbert’s new collection, Caligulan, belongs to that rare class.

After his beautifully rendered Sixty Sonnets and the eloquent All of You on the Good Earth comes this richly wrought (if curiously titled—more on that below) new collection. Hilbert is a classicist in the finest sense of the term: he has a firm grip on the formal orders that have dominated the great tradition of Anglophone verse from the skalds of Beowulf and the Pearl Poet to the tight gems of darkness of Thomas Hardy, and he uses them to write poems that ring with very contemporary truths. A skillful artificer of forms of verse that have sometimes gone wanting or are unjustifiably neglected or despised after the earthquakes of modernism, he is afraid of neither tight meter nor demanding rhymes: he proves there is nothing whatsoever anachronistic about well-tooled verse; the rage of authenticity can speak as sharply in a sonnet as in a calligramme.

The book is divided into four sections, named after the seasons, beginning with Summer. The landscape is mostly North Atlantic, eastern seaboard, in the countrysides of New Jersey and eastern Pennsylvania and the city streets of Philadelphia, where Hilbert lives, and which he knows intimately; he throws out the name “Atlantica” in a poem of that title: a place half mythic, half real, torn in the perpetual strife between love and time.

Hilbert has a strong feeling, expressed with great skill, for this “scape” and its denizens – not only human, but the animals and birds that squirrel in among the human detritus. It’s a world full of life:

“Daffodyls, two of them, astonish me
Ambushing me from winter’s nowhere …”

“The gull pulls bags from trash and drags them clear.
He’s big as a cat, a blur of snow and soot.”

Cats are among the book’s household gods:

“She stalks the May yard,
… moves
Like a shadow …
… a helpless curl
Of fur in her jaws.”

One dies, another lives; and another rules:

A taxidermized moose rises in a museum diorama:

“You still startle, filling half the false sky.”

And yet the central, not always welcome but inevitable figure is of human beings, the planet’s caught, lost invaders:

“It’s pitch dark and pissing down so hard
You see nothing but tearful shards of light.”

“Wind conveys a muffled tune from a truck
Up from a valley, and they make out
Eddie Money’s ‘Two Tickets to Paradise’ …”

“The ship is locked beneath frozen mountains.
It crunches by inches against white floes.”

“He’s stranded in a place remote and sunless …
…
Above him … lie
The archaic stars whose light still shapes the sky.”

The poet here—the “I” of the poem’s fantasy, which is always the poem’s truth—is immersed in the baroque world of things and meanings, a sympathetic (if also sometimes moping and self-absorbed) character, embattled (as we all are, which makes his struggles so like our own) with the shaggy monster of meaning and its opposite, the tough, shiny thing that stares up at us from the bottom of its absence, and that will not, paradoxically, leave us alone:

“… where is our monster, the one we thought

Would always be there somewhere, though hidden?”

as he puts in “Cryptid,” about a visit apparently to Loch Ness, in search of the fabled monster. Then he finds that the monstrous absence is precisely the human, is precisely himself:

“… I catch the shallow

Smudges of my face in the cabin window.”

We haunt the world between a presence we can never find and an absence we cannot accept.

The poems rock between the contemporary and the archaic, binding the modern and the ancient into an embossed shield against time, demonstrating how the old invests the new with a palpable presence, and the new is often merely the latest mask of the ancient, which finds a dented, dulled, coruscating glamorousness in such poems (of particular accomplishment) as “Dishwasher” and “Judgement.”

Some of the poems have an almost palpable feel to them, like finely worked objects you can weigh in your hand, or even smell:

“The man holds the flaccid, bulging wet
Shape up to shine in the sun a moment
Over the slobbering jaws, then drops it.”

This the result of the gelding of a horse. (A tiny preface, tucked away on the copyright page, states, with a kind of reticent irony, that the author “wishes his readers a few uncomfortable moments.” Well, he succeeds—but never without compensating us with an eloquence more memorable than the discomfort.)

So we come to the odd title, a coinage that is explained in two pages of faux lexicography at the start of the book: it is, of course, a qualifier meaning “like Caligula,” the vicious, half-mad Roman emperor, who presided over Rome in a period of supreme decadence (any parallels with contemporary America are, no doubt, entirely coincidental!) and notoriously named his horse as consul; except that here the word is taken to mean “illogical fear of disaster … constant worry for the safety of oneself … obsession with cruel and irrational behavior.” And there is a poem with the same title at the very end of “Autumn”: about a panic attack the poet suffers after an almost comic avalanche of petty but ominous disasters (rolling together, in a rococo goo, among other sleights to human dignity, tasteless television broadcasts, coffee withdrawal, a call from his bank, a crashing computer, and the curses of “Olympian Jupiter”), portending (though it “just hasn’t happened yet”) his own mortality.

Other poems sometimes suffer from the risks and harrowings of an excessive self-consciousness: the poems that forget the brooding “I” and clasp our attention undistractedly to their subject (“Mother’s Day,” “The Gelding,” “Penrose Diner,” with its admirable cinematic “zoom” and neat reversal of relations:

“The waitresses smell of fresh laundry
And menthol cigarettes, arrive with winks
Like busy nurses. All around is cement,
And there’s a hotel in a lot filled with debris.”)

often reach the reader most keenly.

Though a constant trembling of anguish informs many of these poems, like a quiet ostinato rumbling constantly in the bass, what is most notable is how the poet’s anxieties are, in the main, transmuted from personal spasms of what sometimes sometimes feels like merely neurotic terror into objects of great beauty, a beauty that transforms the anguish that generated them into victories, however temporary, of grace.

Hilbert tends to write in a kind of contemporary Augustan “high style,” which has the congenital, Miltonic problems he does not always avoid of over-portentousness and patchy magniloquence. There are related problems when a poet has made his commitment to strict meter and rhyme: an occasional strained and contrived phrase hammered into a line with an ugly pruning of articles and dislocated enjambment (you can sometimes hear the phrase suppressing a snarl at the pinch) so that the blamed thing will fit.

But more often, and on the whole, the strictness of the procrustean bed to which Hilbert has bound his verses is a strengthener – and then the tight rhymes and the enjambed lines sing.

The collection, growing in strength as it moves through the seasons, ending in the resurrecting life of a typically glorious Pennsylvania spring, concludes with what, for me, is its strongest poem, marshalling the poet’s strengths in a swell of quiet, deep, and endearing, eloquence: “Who Is He Dares Enter These My Woods?” a poem that evokes a spring morning in center city Philadelphia with great precision (having grown up there, I can attest to it) and a moment of joy and affection that is entirely winning, that made me feel, surprised and admiring and, strangely—or perhaps not so strangely—grateful.

Christopher Bernard is author of The Rose Shipwreck: Poems and Photographs and Dangerous Stories for Boys. His latest book is the novel Voyage to a Phantom City. He is co-editor and poetry editor for the webzine Caveat Lector.