Welcome, readers, to July’s issue of Synchronized Chaos Magazine. This time we’re looking at Perspective. How we see a single creature within the rest of the environment, or exploring common themes from different angles.

Returning poet Dave Douglas points out that Western society’s modern focus on individualism is not a constant or usual part of our human history.  The concept of individual identity, self expression, value, empowerment and purchasing power, which we now see reinforced through our cultural media and marketing messages, is an artifact of particular times and places and comes with advantages and disadvantages. Douglas critiques the shallow consumerism that he sees as coming out of a culture where people assert their identity through buying the latest personal electronics products.

Returning essayist Donal Mahoney advises young writers that not all have to emulate famous authors such as Charles Bukowski, who made a name for himself as much from his outsized personality and rebellious behavior as from his writing. One can become distinguished as a writer by mastering one’s craft while remaining oneself. He also encourages writers to take rejection in stride, rather than as a personal affront.

Peter Jacob Streitz, another returning poet, offers up a set of pieces grappling with individual and cultural loss, change and evolution. Whether it’s the decimation of Native culture, widowhood, or our own mortality, our world is full of destruction, and not even our best efforts and prayers can always protect us.

Poet Natalie Crick also contributes a set of short pieces evoking natural and supernatural images of death and decay. Yet, her subjects have aesthetic grace even in their deterioration, which comes through in lyrical terms.

In her monthly Book Periscope column, Elizabeth Hughes reviews Courtney Killian’s Days of the Kill. This suspense novel centers on a young protagonist who tries and fails to escape the effects of her family’s mental dysfunction. Next, Hughes hones in on the intergenerational wisdom present in Richard Slota’s upcoming novel Stray Son, a tale of fatherhood, manhood, and war.

Returning contributor Jeff Rasley’s new book Hero’s Journey explores the psychology and cost of setting up real people as heroes. In his excerpt, he reminisces about a boyhood friend whose real life started out similar to that of their shared fictional sports hero, Chip Hilton. When reality intervened, and his friend proved imperfect, Rasley began a thoughtful exploration of the meaning of bravery and honor, not just in sports but in different realms of life.

Finally, returning poet Joan Beebe contributes an innocent and slightly whimsical poem about cottonwood seeds. Still, she’s got a unique perspective here: she’s not praising the seeds’ beauty, she’s cursing them for getting stuck in her window screens and blocking her view of nature.

Here’s hoping everyone enjoys this issue. 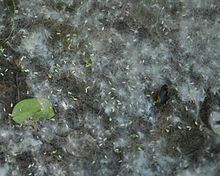 Seeds of the eastern cottonwood 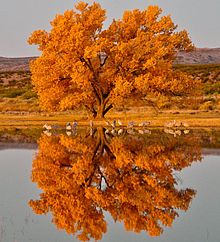 More on the cottonwood tree here.

ELEVATORS TO HELL, GUARDS ON A WIRE, HONEYMOON PIE, AND OTHER FURIOUS TRIUMPHS 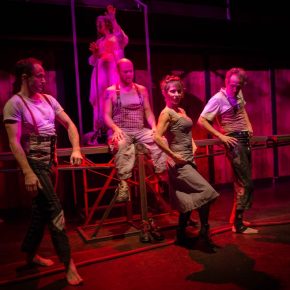 This year’s FURY Factory Festival of Ensemble and Devised Theater shook up the stages in San Francisco’s SoMa recently. Some of the performances were thrilling, and all were worth a visit.

Not least was Seattle’s UMO Ensemble, at the Joe Goode Annex for three performances of “Fail Better: Beckett Moves UMO,” a mind-bending event of pure theater, funny and dark and sharp, based on the writings of the Irish writer. This was physical theater at its most intriguing, turning the dense existential tropes of the great, bleak modernist into brilliantly apropos circus acts – complete with rope-climbing, dancing, wrestling, acrobatics, plus a bit of chocolate tasting (not shared with the audience, unfairly) and prancing about on a teeter-totter – with a sprinkling of brilliant writing on top.

Actually, the brilliant writing was the foundation (which is, no doubt, what distinguishes theater from, say, dance or music or the circus, or, for that matter, a restaurant). What UMO has done here is included most of the elements of live performance (the only ones missing were live music and edibles for the audience), compacted, condensed, sorted and refined to mordant essences.

The show begins with an appropriately Beckettian tableau: a Godot-esque couple of tramps and a Happy Day-esque couple straddle a great, ungainly teeter-totter athwart a light-bathed stage, behind which a grand dame in a scruffy garden-party gown and hat, all of which have both seen better days, officiates from inside a small, chapel-like niche. A spare, almost fleshless gentleman in whites steps forward and, between shy smiles, offers a brief passage from Beckett’s seminal novel The Unnameable, then retreats to an Apple laptop at the back and starts tapping away, threading (apparently) out of his entrails (one of the characters complains at one point, “Are these our words – or his?”) the comedy of bittersweet nothings we are about to be entertained by.

END_OF_DOCUMENT_TOKEN_TO_BE_REPLACED

Memories of a Childhood Hero; Nostalgia and the Cost of Hero Worship

Chip Hilton was perfect – at least in the mind of this boy growing up in a small town in Indiana before the Beatles were big. He was tall, rangy, with blue-grey eyes and short-cropped blond hair. Chip’s square jaw was always clean shaven. A lock of hair would drift down his forehead and need to be brushed back while he was playing ball.

Chip was shy around girls but popular at school with the guys. He was the star player on his high school football, basketball, and baseball teams. Chip was doted on by his hardworking, graceful and lovely mother, Mary Hilton. She always had homemade cookies ready when the guys came over after team practice.

Chip’s dad, a factory foreman, died in an industrial accident saving the life of one of his crew members. Chip suffered stoically the aching loss of his father. The Hiltons were not well off, but managed. Mary worked at the factory as a secretary. Chip had to work part-time as a stock boy at the local drugstore to help with family finances.

END_OF_DOCUMENT_TOKEN_TO_BE_REPLACED

The Novelty of i

i am the app
Consolation
i am the map
Destination

i am the Like
Emotion
i am the psyche
Devotion

i am the spotlight
Conversation
i am the limelight
Celebration

The novelty of i
Promenade –
Receipt of a sigh
Masquerade

The soundboard
Into a lone echo
Unexplored –
The novelty is hollow

This month her depression began.
He obsessed her.
She tied her heart with ribbon like a present,
Licking his fingers and kissing his feet.

Walking in the Winter trees
Were his shadows in the fog.
He was innocent as a lamb.
Sleep, my Angel,

Deaf and dumb
As the drugged summer sun.
My Love,
I want you.

This dark thing that sleeps in me,
It steals from me so I am left with nothing.
I am blameless, Godiva.
The murmurings are alive.
Watching you dully from my bed
I have taken the pill to kill.
I mourn my own death,
Drowning into the night.
My tears could devour
The ocean. I want, I want.
I have lost myself. But that is not enough.

END_OF_DOCUMENT_TOKEN_TO_BE_REPLACED

Cottonwood seeds are so tiny and small

And the wind can carry them far before they fall.

But do they have to arrive at my window screens

And plug all the openings as they come on the scene

Now, I think nature is a wonderful thing

But cottonwood seeds in my screens only bring

Scrubbing and cleaning and work so hard

That I think I will go out in my yard

And look at my screens to finally let out

My frustrated scream and as they are about

To take me away, I look once more

At seeds on the screens and I know that

They think they have won – but not for long,

Because a new season begins and will right this wrong.

The time for those seeds has ended.

I can now see the beauty that surrounds me again

And am grateful that nature finally stepped in.

It ain’t that bad
Judgement day
The day you
read the verdict
From an antiquated
birthday card
But at least,
ya can still eat
Or go for
a’cup’a joe
Some sex exists
Yet the pressure’s off
It’s nothing to do . . .
with physicality
It’s like dressing up
. . . dressing down
Same thing
Without the gravity
For those
with too many candles
To blow the burn
More or less
With less being
—the age—
every idiot talks about
The new 60 being 50
And 40
is thirty-three point three
Or some such crap
Why not make 40
the new dead
Or 32?
An infant’s poo-poo
None of its relevant
There’s only one age
And you arrive at it
. . . like plunging through . . .
a trap door
After years
of immortality
And upright denial
When wearing skulls
and crossbones . . .
as patches,
tattoos and jewelry;
was an imbecile’s way
of owning death—
by childish renunciations
of an impregnable terror.
Denying inevitability
with bongs, bangs . . .
babies and beer
Raving praise be we
In the sweetest asylum
of fitness and health
Before sensing life’s not
a sap’s game
A roll of the dice
It’s a set-up
A preparatory course
A dawning so nonchalant
it’s terrifying
Terrifying—
in the abstract
In the flesh and blood
A natural phenomenon
With no court
of appeals
But only hung juries
as to innocence or guilt
Delivered by
a single magistrate
Whose only peer
is you, the defendant.
Ordering . . .
no imprisonment
Because the party’s
served their time
With both good
and bad behavior
Mixing dreams
and disappointments
Into the peace
of a living life
Before mercifully,
miraculously, magically
Announcing
. . . its all a training ground
For the biggest
of all falls
The one that—
makes you whole
When the alarm,
wakes no more.
END_OF_DOCUMENT_TOKEN_TO_BE_REPLACED